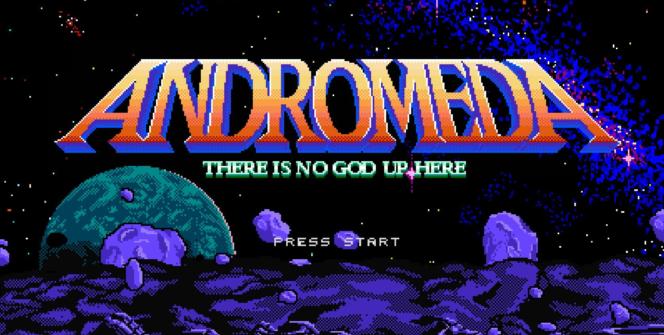 Long after life as we know it has been forgotten, Humans may see a time when visiting the stars and local galaxies are a reality. A new era of existence will be unlocked as a final frontier is set to be discovered by a curious Hominid from a little blue planet. New dangers and discoveries lie for those who are fortunate enough to live in this new plane of existence.

Andromeda: There is no god up here, created by Hebi Lee’s Workshop, begins at this new time for human exploration. Here is a small excerpt of the lore as explained on the Steam Greenlight page:

“Set in the year 5.135 NT (3.870.053.315 AD), it has been millions of years since the Earth became uninhabitable and thus humans now live scattered in different colonies around the Milky Way. Wars between the different species, federations and colonies have made the galaxy a constant war zone where peace is but a flimsy mirage created by the governments to control the population.”

You take on the character of Max Weaver, bounty hunter and pilot of Atila-1. It’s made clear from the beginning (and as you progress through the game) that he doesn’t care about anything outside of himself and completing his current mission. Weaver has no reservations for crossing the galaxy and blowing stuff up so long as the price is right. However, this carefree and chaotic life have led to a cycle of debts, crimes, favors and vendettas that continue to haunt him. Your first mission is simple: find a group of missing scientists that were in the middle of an investigation project in Andromeda.

The game opens with a short introductory sequence that presents itself with a gorgeous 8-bit graphic style. Andromeda looks like Metroid on the original NES in all it’s glory, with the added benefit of legible text and faster graphics. The prelude is a short section with a mission that is “1942” airplane-shooter-esque. It’s a fun opener to a game that presents a much different feel once you get off the ship.

*A flashback to some great arcade shooters before the platforming begins.

Once you land you are set to explore for those missing scientists mentioned earlier. Although the foreground graphics are in 8-bit, the background is a 3 level parallax that creates a real sense of the world’s environment that surrounds you. There are no hints or guides for beginning other than heading left or right. Follow your gamer’s instincts to lead you on the correct path.

Included within your heads up display is a gauge for armor, jetpack fuel, oxygen levels, a resource counter, and a small map indicating where you’re explored so far. Since this is a platforming game, fall damage is included but can be remedied with a quick jetpack burst. Other objectives include collecting resources and finding out any new information about your mission.

Check out our review of Rumpus, an homage to beat-em-up games!

You are equipped with a short range blaster for any combatants that you may run into. This blaster enables the collection of different DNA, combinations of which are effective against different enemies or environmental hazards. As you progress through the game, you’ll have more challenges to meet to continue your journey through the galaxy.

*Max Weaver makes his descent onto the first planet and it’s barren yet beautiful landscape.

This game is based on the may metroidvania games that have com before it, and plays similar to all of them. The controls are tight and responsive, reminiscent of Metal Slug. The music is all chiptune, with full background synth, totaling about 5 or 6 individual parts. It’s simply a pleasure to listen to while conveying the dark and lonely feel of the game’s overall tone.

It was only briefly mentioned earlier, but the graphics in this game are pretty awesome. The developers did a great job of encapsulating the genre of cosmic horror within their creation. Travelling between planets, exploring them, and bracing the dangers is reliant upon your skill in the gameplay. Although it’s through the scope of an 8-bit game, it still feels like an immersive experience.

The title card reads THERE IS NO GOD UP HERE to remind you outright that this mission is yours to take alone, and the mysteries that are to be discovered lie ahead of you. Between the graphics and plot, it is clear that the developers are letting their love of the genre be their motivation behind this game.

*The end of my very brief encounter with the first miniboss on the opening planet.

The graphics and audio are superb to say the least, each complimenting each other with ease. The plot of this game will keep you intrigued to learn more about our sister galaxy. The dark mysteries that lie underneath have yet to be discovered; the worst and deadliest nightmares yet lived nor seen.

Andromeda is definitely a game I want to see made to completion. Although it’s Kickstarter did fail, the demo is still available for download. Go check it out for yourself!