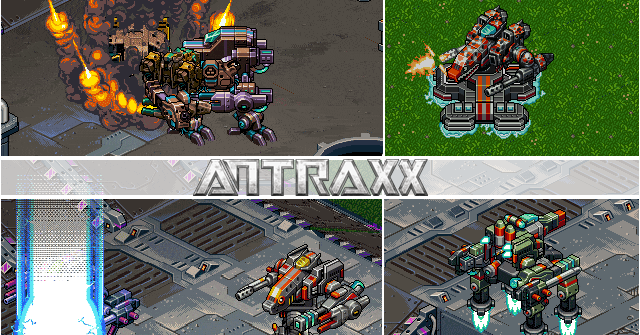 Antraxx is a massively multiplayer mech shooter with a heavy emphasis on teamwork and replayability with completely customizable mechs and zones. Boasting multiple game modes and in-depth faction politics and economy systems, allowing you to play the game how you wish. Although the most typical way to settle disputes in this game is to blow each other up, it combines elements of different genres to create a new experience that is easy to pick up.

Humanity has endured plagues, wars, and the depletion of all natural resources to find themselves with a world that is left completely barren. Flora and fauna are but a memory, the desolate environment forces humans to move into underground bunkers, fighting over the remaining supplies, weapons, and territory. Humanity continues to struggle with one another as new Factions currently face-off in a perpetual war. Which side are you on?

*A relaxing moment by the docks before the madness erupts.

Antraxx is a next-generation isometric shooter that is completely rendered in 3D, utilizing hand-drawn pixel art. Gameplay is centered around your Mech, which operates as your weapon and armor against enemies and other combatants. Collect parts in order to customize the abilities and functions your mech serves. These options allow for many different styles of play to be approached, as different combinations are discovered.

*The Mech customization screen, allowing many different options to be explored.

An interesting aspect about Antraxx is the fact that every level holds 64 players total. This allows for large battles and all-out mayhem. But I didn’t personally get to encounter many people (only one actually, and they were MUCH better than I). I know more people would dramatically increase the fun and atmosphere. This game is meant to be enjoyed with a full crowd.

Antraxx uses gorgeous and crisp pixel art graphics to show off the level design. Combine this with the 3D rendering and you get a visual experience that is a feast for the eyes. It’s almost hard to believe this game was drawn by hand. It’s simply beautiful.

Since the game is isometric, the lines of the game are set at a diagonal. Unfortunately this background is paired with the traditional up/down/left/right joystick scheme, causing a conflict in direction and proper movement. The collision detection is a little rough which leads to clunky movement with the certain models of mech. Although I expect these minor issues to be polished up when the full version is released

There isn’t any, at all. Since it’s a demo I’ll assume there’s more to come with the full release.

Antraxx is a game that incorporates a new flavor of gameplay to a traditional arcade art style and is certainly enjoyable. It is currently in it’s playable Alpha and has a Kickstarter Campaign in order to fund further development. Go check them out and take a crack at Mech Warfare!