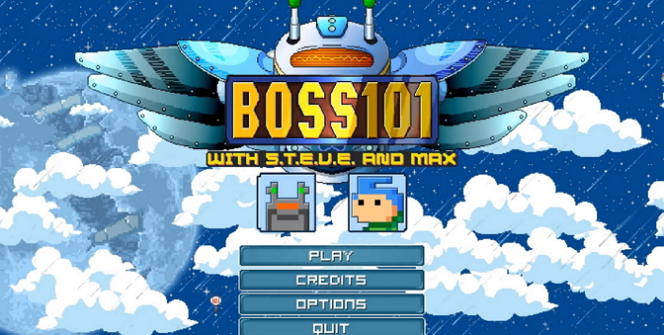 Growing up, once or twice you have imagined owning a jetpack. Or a robot. Or both. As luck (and reality) would have it, most of us never experience these items in real life. Luckily, there are ways around the gaping hole left by our childhood inclinations of cool gadgets.

“The journey of a thousand light years… begins with a jetpack.”

Boss 101 is an action adventure game, developed by Donley Time Foundation, with you taking the role of Max: a teenager with a jetpack & robot. Your objective is to help your brother and save the world at the same time: buy weapons, hats, and upgrades while you battle bosses, explore different worlds, and experiment with modes.

Boss 101 starts with your brother’s request for an action-packed birthday. Unfortunately he is in the hospital, so it’s up to you to bring him an unforgettable home movie. Thus begins your adventure across the globe (and even the galaxy) in order to collect the best movie footage for your brother. With the utilization of a command center, research labs, and even other games are available to you to complete the task!

Your journey will require the creation of battle bosses with the “Make-A-Boss” generator, a feature that allows you to randomize the challenge of bosses before completing executing a level. The ultimate goal is to rescue baby Robo-AI’s from the clutches of the biggest baddie of all, the dreaded Boss 101.

You are immediately welcomed with a colorful and lively game, bright with beautiful landscapes, clean menus, and LOTS to explore / do. The opening scene takes place within the Command Center, essentially serving as the Hub between worlds, a shop for upgrades, & an arcade to play other games (within the game – for prizes).

*The Command Center, in full view.

Auditory presentation is full and robust, with orchestral string music swelling the main menu. Each mode contains different themes to fit with the action. Sound effects within the game include standard shooting and impact sounds, very reminiscent of effects heard from the “1941”-type arcade games. The compliments between sound and visual design is proof that the developers took their time to create an entire universe.

For the main story line, it’s a side-scrolling shooter, utilizing your jetpack to dodge incoming projectiles while fighting enemies. Combined with the Command Center’s upgrading system, there are RPG flavors implemented. Upgrade ships, characters, weapons, armor, and much more! The combinations lend to the replayability and use of changing strategy to complete each level. Unmistakably original in execution, especially when considering the next main feature of Boss 101.

Boss 101 is not just a linear story with a single story mode. There are actually 5 modes with 2 variations to keep the gameplay fresh and interesting. Ideally, you get a ton of enjoyment with the base game and the arcade games are simply an added bonus. This is truly a wealth of content for such a small footprint of a game.

Story – Base game with progression through 31 levels/rounds

Save the Robos – We also have missions where you will be taking Baby Robo’s safely into space.

Warp Chase – Follow the boss as he warps from level to level. Knock him out of the warp tunnel to resume the fight!

Endless Boss Mode – One life against an endless array of bosses. Keep going against random bosses until you die.

Quest and Recover subgames – Modes that will reward players for things like (but not limited to): completing rounds using certain weapons, rescuing allies, timed rounds, knocking out specific enemies, protecting friends and more!

Iron Bot Mode – One hit point and that’s it.

(The final two modes are sub variations of the other gameplay modes.)

I’m not sure how much more can be expected out of  a project that took three people nearly three and a half years to create. Boss 101 is truly remarkable.

*Do you want to fly a kite to relax? There’s a mode for that, too.

Boss 101 is a delightfully modern twist on a classic arcade genre. Modern elements of customization, boss creations, level exploration, and many hidden Easter eggs provide a gaming experience that is likely to leave a lasting impression. The use of randomizing boss battles is just the icing on the glorious pixel-art cake. At $10 on the Steam store, this little gem has so much to offer, it is absolutely worthy of a spot on that game list of yours.