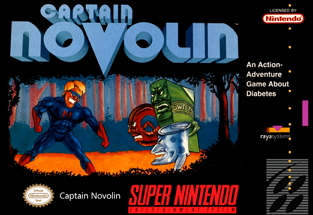 Here’s a weird little story about an SNES cartridge that’s managed to stay in my possession for over 20 years now, despite the fact that it’s never given me an ounce of joy to fire up. Okay, that’s not completely true. When I set out to write this review, one word was on the forefront of my mind. “Scathing.” After all of the wasted hours, controller throwing, hair pulling, etc., I was really ready to rip this game a new asshole, as it had done to me (I’m the owner of a few assholes, most of them ripped by The Lion King for SNES). But the more I’ve played this game over the past week, the more I’ve gotten used to its inhumane tricks. I’ve developed a Stockholm like affection for its halfway decent artwork, its funky yet grating score, and its charming, educational vibe. But I might  just be losing it.

The game in question is Captain Novolin. The Diabetes game.

A little backstory about this game; it was released for the Super Nintendo in November of 1992 from developers Sculptured Software and published by Raya Systems in collaboration with Novo Nordisk, the pharmaceutical giant. It was distributed through doctors offices to children diagnosed with type one Diabetes, a disease in which one’s body attacks the insulin one naturally produces, causing the individual to have to constantly monitor and control his or her blood sugar. I couldn’t find anything to confirm this, but I’m assuming that one had to purchase the Novo Nordisk brand of insulin, or Novolin, to receive this cartridge. Like I always say, nothing says world class gaming experience like a big ol’ advertisement from the pharma industry.

While Raya Systems unfortunately never got around to releasing Lieutenant Viagra, Captain Novolin was actually part of a series of four other educational SNES games. Furthermore, it was not the only one in the series about Diabetes. One of these games is entitled Packy and Marlon, and follows the story of two diabetic elephants on their quest to take their insulin on time and avoid  refined foods. Nobody asked me, but could you choose a worse species to make the heroes of your Diabetes game?

The mastermind behind this atrocity, according to the pre- title credits, is a guy named Perry Rodgers. The internet has virtually nothing personal to say about Rodgers, but indicates that his post- Novolin years were pretty successful. He later joined up with Sony and has senior producer credits on several huge titles such as Final Fantasy VII, Spyro the Dragon, Gran Turismo, PaRappa the Rapper, and Double Dragon.

The reception of Captain Novolin was pretty unanimously bad. If you just check the wiki page, you might be mislead. The article alludes to a study which indicates “boys and girls were enthusiastic about the game and said it would be useful when telling their friends about Diabetes.” What isn’t mentioned is the fact that the game play is, and I quote, “unforgiving.” Gamefaqs users gave it a rating of 1.08 out of 5. In addition, Giant Bomb testifies “Captain Novolin is regarded as one of the worst games on the SNES.”

Ah, the humble title screen, where players get to endure the equally humble theme song entitled, you guessed it, Captain Novolin. Last digression (I promise), the score for this game was composed by one Kingsley Thurber, an unsung sorta- hero in the world of video game music up until 2000. Thurber started his career scoring low budget horror films. One of these films was entitled “Don’t Go Into the Woods,” and it’s theme song features Thurber’s ehrm… let’s say “iconic” style of vocal and keyboard performance. Have a listen:

Keeping this little ditty in mind makes listening to the Novolin theme, which I already thought was a bit off, all the more frightening. While it’s kind of groovy, the eventual 16- bit “guitar” solo isn’t so pleasing to the ear and will absolutely give you a headache if you listen to it too many times in a row. The rest of the score is evenly sprinkled with “wtf” musical moments, particularly during the
intermittent Diabetes trivia. While you’re presented with a question, what is basically the jeopardy theme song plays on loop, jumping in pitch each time it restarts. If you take too long to answer the question, you’re surely going the way of those Japanese Pokemon Green kids post Lavender Town.

Thurber’s career was also no bust after Novolin. He continued on to appear in the credits of a few popular titles, the most notable being Mortal Combat. The game begins. The premise is cute. Aliens have landed on Mt. Wayupthar and have disguised themselves as various junk foods. Blubberman, their overlord, who is looking to take over the earth. He decides the best way to do this is by capturing your random town’s diabetic mayor. Mayor Gooden has 48 hours worth of insulin, and you, Captain Novolin, must save him. Almost immediately upon agreeing, you meet a doctor who reminds you to check your blood sugar and take your insulin… because like the mayor, you have Diabetes. Apparently, everyone in this society has Diabetes.

Once you’ve checked your blood sugar and have given yourself a correct dosage, it’s time for an adventure. You quickly learn that Captain Novolin’s super power is dodging the sugary food. You don’t have any attack, although you can sometimes use a jump attack if your timing is nothing short of perfect. Along the way, you’re supposed to collect healthy foods specified by your doctor such as bananas, sandwiches, milk, and apples. However, eat too much of the healthy food, your blood sugar will go too high and you will lose a life. Ignore too much of the healthy food, and your blood sugar will go too low and you will lose a life. Even more-so than in in real life, it is VERY DIFFICULT to dodge the sugary foods that come your way, specifically the doughnuts and the cookies. The cookies actually wait for you to jump and then jump at the same time as you, sealing your doom. Captain Novolin’s sprite is awkwardly big and tall., which makes running under the foods when they jump even more difficult than jumping over them.

Here’s some food for thought (pun intended). While this game certainly succeeds in teaching kids about how to manage their Diabetes with their eating habits, isn’t indicating that the ultimate consequence of failing is DEATH a bit too… much of a message for children? I’m not one to bemoan all violence in video games, but this next statement I will stand by– the last thing a six year old who has just learned they now require injections several times a day needs is a virtually unplayable game that they cannot  make it past the first stage of. I would indeed rate this game as unplayable for children (my poor diabetic brother and I never got anywhere as kids), difficult for adults (my poor father only managed to get us a couple of stages in), and at the very least, annoying for experienced gamers. 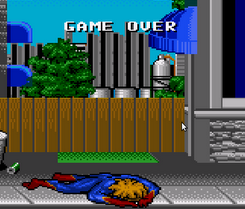 The gameplay is pretty repetitive throughout the stages, but the graphics are cool, bright and colorful, and the scenery changes. For example, in the third level, after an advisory to wear supportive shoes (diabetics have poor circulation), you get to drive a speed boat. However, the premise and controls remain, jump, dodge, jump, dodge, die, jump… up until you fight Blubberman, whose weapon is, of course, pies. 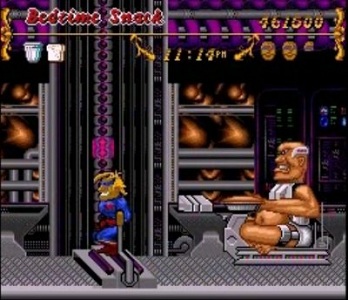 Defeat him, and the mayor is yours. And I suppose since Blubberman can’t even succeed in holding one diabetic mayor out of the many non diabetic mayors the earth contains, he decides to reign in his aliens and head on home. So ends Captain Novolin, which, despite everything, I admit I feel something positive for. What about you? Have you recently had the pleasure of dusting off this cartridge, blowing into it until you can’t blow no more, and popping it into your yellowing SNES? Do you play it only with a smile and take deep offense to my criticism? Do you play it with a scowl as you attribute all of your bald spots to it? Comment away!