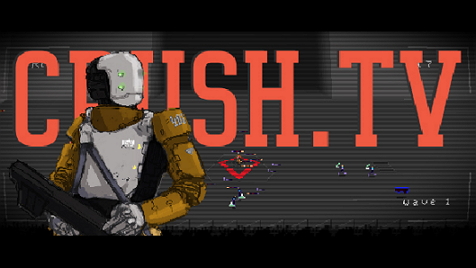 One arena, two competitors, and hundreds of enemies equipped with swift and punishing ways to murder you. That’s the recipe for CRUSH.TV—one you may remember from early arcade games like Smash TV and Robotron: 2084. In fact, developer Salt & Pixel cites those two games as the specific inspiration for CRUSH.TV, a 2D shooter that is currently available in early access.

First, let’s get one thing out of the way: I’m bad at CRUSH.TV. I’m no stranger to shoot ’em ups, but this one seems to have been designed with only the most challenge-obsessed gamers in mind. High difficulty levels can be a plus for some players and a barrier for others, but more on that later.

CRUSH.TV begins with a simple premise and a steep difficulty curve. The game throws you right into the middle of a packed arena, armed only with a basic gun and your wits. You also have a CPU-controlled buddy to fight at your side, which carries the promise of 2-player co-op in future editions of the game.

After a short countdown, your foes start flooding onto the stage. That’s when the carnage begins.

Don’t leave out the gory details.

To make it through a round, you and your partner will have to withstand hundreds of foes and one formidable boss. Your character is a little slower than most of the enemies, so you’ll have to use clever maneuvers and fast shooting to get through them. The game gives you several respawns to throw you back into the action every time you die, and trust me, you will definitely need them.

CRUSH.TV seems to delight in killing you over and over. For the first stretch of the game, that’s the only way you’ll learn how to progress. Every death gives you some insight into how your enemies function, whether they’re trying to shoot you down, blow you up, or cut you to pieces. You’ll learn to prioritize foes on the fly so you can survive for a longer stretch of time.

You’ll also need to figure out the various temporary pickups that will appear in different corners of the arena throughout your battle. Among the weapon upgrades, you’ll find the usual culprits: faster bullets, a grenade launcher, a flamethrower-like gun with short range and a wide spray, and a couple of super-satisfying laser blasters. Your character also has a devastating special attack that can blow through huge swaths of enemies over a generous activation period.

We now interrupt your (ir)regular programming.

While many aspects of CRUSH.TV are genuinely challenging, I can’t help but feel that the difficulty level is a little bit forced—and not just because I suck at it. For one, the controls need some work. On a gamepad, the game’s intended method of play, you use one joystick to move and one to aim your gun. While the movement controls are smooth, you can only aim in eight directions instead of having a full range of motion. The result is a kind of “choppy” feeling that leaves too many gaps between your shots and your foes.

The aiming scheme is likely a throwback to the game’s older arcade influences, but it doesn’t work as well on CRUSH.TV‘s larger scale. Because the playing field is so much larger and the enemies so much smaller, it often feels like you’re put into impossible situations because of your limited ability to aim. In the end you sacrifice precision in order to artificially inflate challenge, which is something even “hardcore” players may see as an issue.

Some may also find that the difficulty is due in part to the sheer amount of action taking place on the screen at any one time. The small player-character models can sometimes get lost in the swarms of enemies, as well as the constant laser fire and gore splatter. There’s a screen at the top of the arena that tells you when your special is ready, but in all of the shooting and dying and running around, it took me a very long time to notice it even existed.

Verdict: The game doesn’t quite strike a crushing blow.

Once you get used to CRUSH.TV‘s presentation, it gets easier and easier to process what’s going on. You’ll learn to interpret different signals and react to your surroundings more quickly. The nice-looking visuals also feature the right amount of graphical detail to tell apart enemies and attacks without overwhelming the eyes.

CRUSH.TV has the potential to be a great game, especially for fans of its arcade predecessors. In its current state, though, it can feel a little monotonous. The game gets more engrossing once bosses enter the scene, but the time it takes to reach them can sometimes drag on. The sound effects are gratifying in a nostalgic way, but the music gets lost in them, which almost makes the game feel silent. It needs a good soundtrack to rev up the energy levels.

On the positive side, the game features some very intense moments. You can pull yourself out of a near-death struggle and find a powerful pickup that annihilates foes from a distance, only to be robbed of your moment by a stray shot or a nearby explosion.

The fast pace and constant onslaught of foes in CRUSH.TV creates an exciting tension that makes you feel like you’re really at the center stage of an epic battle. The second you pause for breath is almost always the second you meet your demise. In many ways, untimely death is where the game really shines—and with the right improvements, it might just survive its official launch.

CRUSH.TV has been in development since October 2016. You can play an early access version of the game, and follow along with its progress, on the developer’s Gamejolt page.