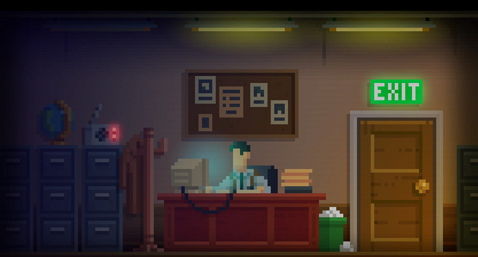 Our story takes us down a shadowed path. A path so dark, it needs three creams and three sugars before most people can even consider drinking it. But Detective McQueen isn’t most people. He takes his coffee black; his cases bizarre. Follow him as he takes the path leading down the rabbit hole, leading him to solve the creepy case of Malice in Wonderland.

So begins the demo of this noir adventure game, The Darkside Detective. Developed by Spooky Doorway, this point and click mystery aims to please with its pleasing aesthetics, witty storyline, and classic noir soundtrack. I’d been following the development of this game for some time, and after many months, I finally let my curiosity get the better of me. I downloaded the demo, and I wasn’t disappointed.

The story (in the demo) is centered around Detective McQueen and his bumbling sidekick, Officer Dooley, as they crack the case of a missing girl, Jenny in Malice in Wonderland. Our 8-bit heroes stumble their way through Jenny’s house, investigating the rooms, interrogating the adults, and pocketing seemingly random items for later use. The demo can be played through within 10 – 15 minutes, so if you have some downtime and want a quick burst of enjoyment, this is definitely a title worthy of your time.

The controls are like any other point and click adventure. You point. You click. They walk. Simple. The animation is incredible – the devs made the movement so fluid and graceful that I was immediately transported back to a time when these kind of graphics were considered “cutting edge” and people actually put effort into them. Zero issues with controls and no glitches to be found whatsoever.

Like most beautiful pixel games, I was initially drawn to this title simply due to its gorgeous aesthetic. The game’s design is so perfectly retro that it’s almost as if this game was the pinnacle of development in the late 80s and then subsequently locked away until now. It was the little touches, I think – the way the rain fell, the tears the mother cried, the lighting of the mystic runes…all these components and more came together to make such visually pleasing graphics that made my eyes feast.

The storyline is what cemented my love for this game. While the gameplay was short, straightforward, and to the point, it was well-written and comical. No loose ends that needed to be tied up, no burning questions that demanded answers, and plenty of “wait, what?!” moments that made me laugh in disbelief. Not only are the developers great designers, they’re great writers who threw in a number of X-Files and other references for our viewing pleasure (and have the noir humor down pat).

I’ve watched many games go from an idea to a completed product, and many of them either end up being pretty decent to half-baked and horrible. Fortunately, The Darkside Detective seems to be one of the few that ended up being exactly what I wanted from this game – a snarky, pixelated point and click noir that is both visually and audibly pleasing. The storyline is surprisingly light-hearted despite the context, firmly balanced out with the wisecracks from Detective McQueen and Officer Dooley. I cannot recommend this mini-mystery enough, and since it’s only a 10 – 15 minute play, you might as well pick it up for yourself.