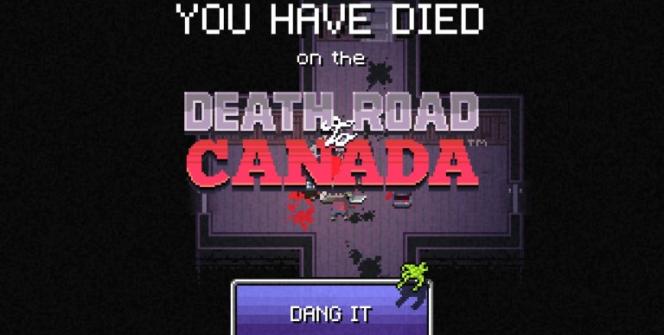 RocketCat Games‘ Death Road to Canada is Oregon Trail meets Left 4 Dead plus a dash of Pac-Man, add mild hallucinogenic. Instead of ghosts and smallpox, though, your main enemies are zombies and interpersonal conflict. You start by designing your character, and pick two personality traits for yourself, with options like “irritability” and “Megabuff.” These traits actually matter, and they impact not just how fast or strong you are, but how you interact with other survivors in the game. You start your journey with a partner (or not) and a beat-up sedan, and along the way, you have the option of joining in with other procedurally generated and handcrafted characters. Like in real life, you have to decide whether fending off crushing existential loneliness (and murderous hordes) is worth the toll a companion will take on your resources and mental energy. Norma might seem like a decent enough lady at the outset, but hours on the road together (sharing a dwindling food supply) might reveal that the previously chill seeming Norma is actually kind of a jerk, & not as great at gathering loot as she seemed.

You and your companions travel through the game, having to decide where to explore, whether to trade, and what risks are worth taking. Does the bookstore or the pet shop seem a more likely place to gather food and fuel, and do you feel confident of your chances against a horde of “super-cheesed” undead? This is a game where the choices you make genuinely feel like they matter. Make the wrong decision, and your food supply and ammo are toast. But lose your car, or even your life, and you are not out of options. A variety of modes of transportation pop up throughout the game, from police cars to priuses. And if you die, you can play as one of your companions instead. This is great as a single-player, but less effective in co-op mode (more in that later). I found playing as a chainsaw-wielding Rottweiler to be particularly exhilarating, although over time I grew disheartened from a lack of companionship (a danger even the most independent and badass dog can succumb to, I suppose).

If you are looking to lure someone in to the world of video games, Death Road to Canada represents an excellent opportunity. The plot is straightforward, the bashing of zombies doesn’t require a huge amount of skill, and a lot of what you are doing, at least in the beginning, is fleeing and dodging around zombies, in an attempt to grab tools & supplies to help on your journey (this is where the Pac-Man vibe comes in, especially when fleeing up and down the aisles of Y’allMart and Smallgreens). Graphically, the game is engaging, especially because the zombies look different enough from each other to make the large hordes intimidating. The variety of weapons keep the action satisfying, and the game is genuinely funny and weird in a way few video games are. There are no annoying cut scenes or unnecessary backstory to deal with. You want to get to Canada, damn it, & you don’t need a missing child or long lost love to motivate you to get there. All this makes it very easy to jump in, no matter your skill level.

There are a few annoying elements to the co-op gameplay, however. The co-op feels a little bolted on; only two player local co-op is available, even though your max group size is four. This seems like a big missed opportunity. Four-player local co-op would make this an excellent party game. In addition, there is no way to save your companion if they go down, and if the main character dies, the secondary character doesn’t get the opportunity to become the leader. As you move from room to room, your co-op partner does not automatically follow, and it’s difficult for the secondary player to keep up. There’s smaller things too, like a lack of feedback when you open and close doors that means it’s easy to close the door on your partner, leaving them to fight off undead alone. Despite these flaws, it’s still an extremely fun game to play with another person.

The game is fun enough to justify repeat play-through, and as you play you level up the skills you can select when creating a custom character. It would have been nice to have the ability to have more persistent impact on the game world, though (really, I just wanted the ability to write “pepperoni” on my tombstone the way I did as a kid, playing Oregon Trail).

There are also nice RPG elements, like the ability to trade food for fitness lessons, or to practice your vehicle maintenance skills. The soundtrack is great too, reminiscent of lesser known Nintendo games like Double Dragon & The Adventures of Bayou Billy. The unconventional mixing of synth and real guitars helps to evoke a retro Rock ‘n’ Roll NES vibe.

The writing is some of the best I’ve ever encountered in a video game. It’s obvious Rocket Cat put a ton of care into this aspect of the game. The players encounter different scenarios in form of choose-your-own-adventure style vignettes, where they have to choose what benefit to earn (after surviving a siege for instance), or even something as small as what kind of magazine to read. All of these choices have repercussions, not all of them predictable. The magazine AMERICAN G*U*N*S, for instance, is filled with tons of gun advice but also “ultra-patriotic rants”, and reading it will increase your shooting ability but lower your composure.

As someone who has actually made a long drive to Canada before, I can say with confidence Death Road to Canada is a much more exciting alternative.

Grab Death Road to Canada on Steam for 14.99

Maria Geary
Maria Geary likes pixelated games because the format makes it slightly harder to objectify women. She is from Alaska. Her main complaint with Stardew Valley, & life, is the amount of socializing required. You can follow her on Twitter at maria_JGB.