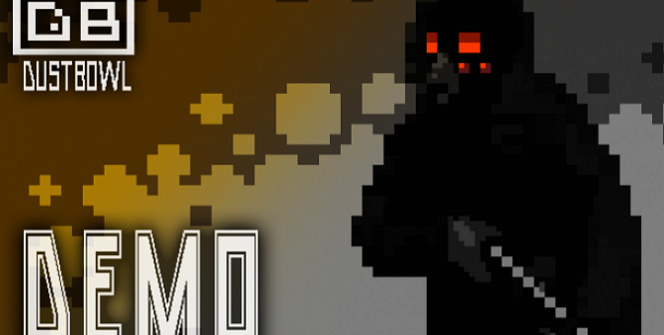 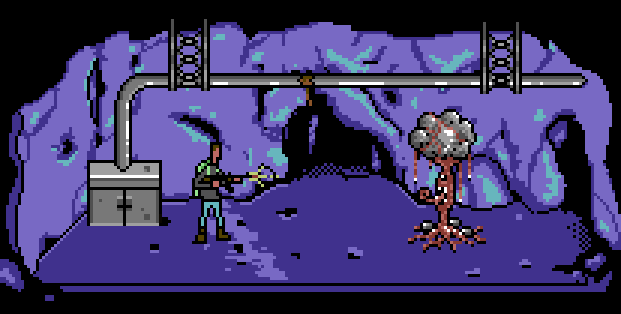 This week I was lucky enough to get in touch with Mark Pilkington over at Cloak and Dagger games for a preview of his new game Dustbowl. This post-apocalyptic point and click RPG is set in a bleak world littered with toxic decay. As the story goes, an alien attack left a cloud of toxic dust that consumed the planets life forms, reducing humans to deformed creatures and all remaining life on the surface, virtually extinct. You play as a survivor trying to find your father who left your underground community on a confidential mission. Though seemingly pulled from an earlier era, this game plays a lot like other familiar point and clicks like Beneath a Steel Sky, Fallout 1(&2), and Primordia. The graphics are simple and more lower-res than the aforementioned titles, but this gives Dustbowl an atmosphere and aesthetic that are a breath of nostalgic air. 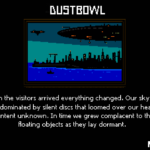 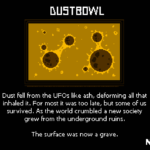 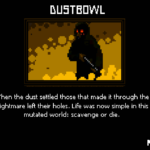 Dustbowl is at its core, a survival game. Scavenging nearby areas will be your main priority, so looting everything is crucial! By collecting as many useful items as you can, you stand a much better chance of surviving Dustbowl’s wasteland mutants. You will gain new tasks along the way, many of which will yield new and unique items to help you stay alive. The demo also features a day and night system. When night falls, a “tired” icon will appear on screen indicating that you should rest. I found that resting was essential and will give you a good portion of your health back. I would recommend doing this as often as you can to cut down on supply usage. The combat in Dustbowl is one of the coolest features the game has to offer (and you will know once the music kicks in). It uses a turn based, “timed attack” battle system where you have to time your clicks just right to achieve critical hits. It is extremely important to try and master the timed click. Enemies are randomly generated and you have limited ammunition.  Some enemies can be pretty powerful and are capable of doing A LOT of damage. A missed shot could be your last if you aren’t healed properly before battle. I particularly enjoyed the text animation that appears when it is your turn to attack. The text has a horror movie / comic style that is unique and adds to the style of the game. 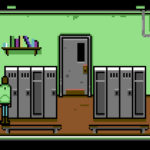 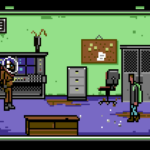 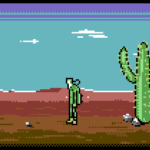 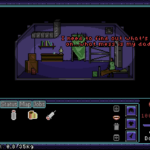 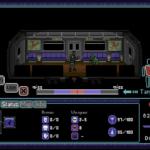 With environments that are nostalgic, designed well, and are pleasing to the eye, you are always looking forward to the next area you find. Like most pixel art games, I am a big fan of the less is more design approach. It lets the player use their imagination and fill in the blanks of the world the developer has created. Exploration plays a big role in Dustbowl and features a few Easter eggs, which I found to be a pleasant reward for exploring distant destinations. As you move about the world you will encounter other survivors, all of which have some really interesting things to say. The writing is definitely one of the games strong points, as character development is a hallmark of the genre. Another interesting aspect is the minimal use of music during exploration. It’s creepy and adds to the overall aesthetic of the world while emphasizing feelings of solitude and isolation.

Dustbowl excels at crafting feelings of isolation and capturing survival in a post-apocalyptic world. The animations are solid, combat is tense and staying alive is challenging. More point and click adventure games like this need to come out and I am excited to see what the future holds. If you are a fan of post-apocalyptic fiction, you need to get your hands on Dustbowl!

The Dustbowl demo is available free and the final version is coming to PC May 2015. Show your support on Steam Greenlight!