Emily Is Away Review

Home » Emily Is Away Review 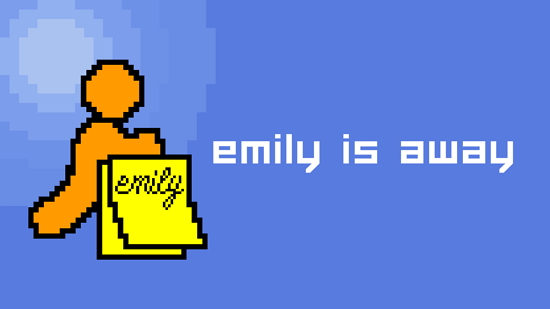 Don’t get me wrong, Emily is Away is a fun, nostalgic concept. You play as a character in a simulation of AOL Instant Messenger, chatting with your friend Emily. The game itself has five levels, and each level is made up of a single conversation a year between you and Emily, from 2002-2006. You can let others know WHO YOU ARE by choosing a screen name and choosing from 12 avatars. You get to decide which 50×50 pixel image accurately reflects your innermost soul: the movie “Mean Girls,” or a kitten? This is an excellent reminder of how truly embarrassing we all were circa 2002.

Then you begin to chat with Emily.

Unfortunately (or not, depending on your desire to interact with someone with Taking Back Sunday lyrics in his “About Me”), you never get the chance to talk to anyone else in your friends list. The game is fairly simple, and you can play all the way through in about 30 minutes. Each time you type, you get the choice of three things to say, which then result in different responses from Emily (you get it, you’ve probably talked to someone before). Your relationship with Emily unfolds in these tiny once-a-year conversations, as you go from high school seniors discussing attending a party to college graduates at two different schools.

The game is immediately appealing to those of us who look back fondly on the days of instant messenger (although I was more of an MSN chat girl, personally (anyone??). The game is a reminder that the way people communicate on the Internet now is very different than it was in AIM’s heyday. With the advent of Snapchat and Twitter and Facebook, we are most often observing each other, rather than interacting. We no longer have to ask, “what’s up?” to learn of a graduation, job, baby, vacation or night out, and we can avoid the effort and sometimes awkwardness that comes with engaging with one another directly. When we do reach out, by leaving a comment on a post or writing on a friend’s wall, we do so knowing that exchange is visible to our shared connections, making everything we say on some level a continuation of our social media performance.

AIM was different. It allowed the space for drawn out, frequently pointless conversations between two people, in a way that engendered, sometimes, intimacy. You could say things on AIM you were too afraid to say out loud. This, I think, is what the game is trying to capture. The most affecting moments in the game occur when you see Emily pause a long time before answering, or your character starts say something revealing and then decides to play it safe.

But the game falters. The biggest problem is that both you and Emily are extremely boring. Because your options for responses are limited, the game feels like watching two people with nothing in common and no sense of humor talk to each other for no reason other than the possibility of eventual boning (this is realistic, but no fun if you are not either of the two parties). Sample interaction: You ask, “Do anything fun recently?” and Emily replies, “not really, just been working.” If I wanted to spend precious time interacting with someone who seemed completely uninterested, I’d send my boyfriend more excerpts of my Anne of Green Gables fan fiction.

Then there’s the end. No matter how you play through, or what choices you make, the result remains essentially the same. Without revealing too much, I’ll say that at least one of the play-through options suggests troublingly that Emily feels you may have manipulated or coerced her into hooking up. If, horrified, you play through again and try to stay as far away from that possibility as you can, respecting her boundaries and treating the women in your life with honesty and respect, Emily is pissed you didn’t make a move. If you lie to your friend-who-isn’t-really-a-girlfriend about Emily visiting, she finds out and becomes angry. If you tell her the truth, she knows immediately and is angry. The narrative here seems to be “men, there is no way you can interact with women that ends positively for you.”

Even if you, like me, try to soothe yourself by imagining you are a female character engaging in a lesbian flirtation, the dynamic remains pretty gross. Your character, supposedly one of Emily’s best friends, has the option of trying to convince her to break up with her boyfriend for almost no reason, and is frequently passive-aggressive about her life choices. And yet the creators of the game seem to want us to find it emotionally stirring that you and Emily can’t find a way to make a relationship (romantic or otherwise) work. The game would have been far more interesting if there seemed to be any awareness on the part of your character or from the creators of the game that maybe your character’s shitty friend skills and general thirstiness led to the eventual state of your relationship.

Emily is Away is trying to capture the complexity of human relationships, the ways we miss each other and fumble and fail to connect despite our best efforts. I appreciate the attempt. But, much like the real AIM, it ended for me with an “LOL, bye.”

Maria Geary
Maria Geary likes pixelated games because the format makes it slightly harder to objectify women. She is from Alaska. Her main complaint with Stardew Valley, & life, is the amount of socializing required. You can follow her on Twitter at maria_JGB.