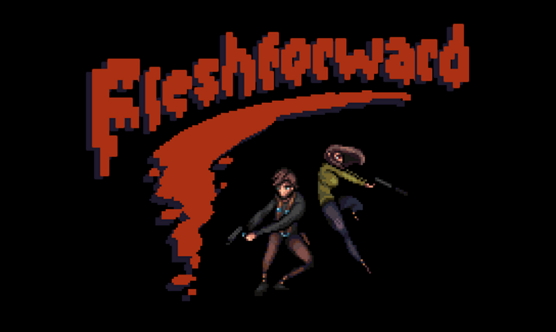 Editors Note: As of the date of this posting, this game is still currently in development.

I’m a strong believer in subtlety. Games that give playful winks and nudges towards their inspiration are far more appealing than games who beat players over the head while shouting “do you get the reference?” In this case, Fleshforward tends to do the latter.

Developed by small Italian developer, Linked Rooms, Fleshforward is a RPG Maker game that waves its inspirations around like someone wearing a Make America Great Again (MAGA) hat, or a #feelthebern t-shirt to a nightclub.

It’s an isometric RPG that blends stealth and real-time combat with the old turn-based inventory management of 90s RPGs. It has a similar inventory and world design to Resident Evil 2. You fight zombies. You have limited space on your character requiring you to make frequent visits to the safe room’s storage box.  Levels are broken up into smaller areas that are chunked up by black loading screens. The way I describe this game to my friends is that it’s like Shining Force meets Resident Evil 2 – but worse.

Before I rip into this game, I’m going to start with what it does right: atmosphere. The game opens with a car driving down a road, and text bubbles indicating a driver who is attempting to contact someone via a radio, however no one is answering. A few moments later it cuts to black along with the sound of tires squealing followed by the sound of impact. Afterward we see are fiery remains of the car, and our protagonist laying on the floor, text-bubbling in pain.

Throughout the demo, there is no music outside of the safe room. Everything is dark, lights flicker, water has pooled in areas on the floor, and the game just has this great sense of loneliness and tension that really captures what it means to be the sole survivor.

Unfortunately, that’s pretty much everything positive I have to say about this game. The rest of Fleshforward is a awkward, poorly written mess that seems like it was written by someone who just played Resident Evil and Silent Hill over the past weekend.

While I shouldn’t fault it for being a RPG Maker game, I’m going to. With other brilliant examples such as Hyper Light Drifter, Undertale, OneShot, etc., it’s hard not to call Fleshforward lazy. Everything looks muddy and gross. Even though it’s in 8bit pixels, it still manages to look extremely low resolution. The textures in general are ugly and the low lighting means you often have to squint just to make out details of the objects and environment.

The game also likes to hold the player’s hand a lot. It tries to show itself off as a survival horror RPG that highlights exploration and crafting, but most doors are locked, there isn’t much to interact with in the environments, and when you finally manage to escape the first area, the game limits the places you can explore with text bubbles that say “you shouldn’t go this way for this contrived reason.”

The controls are also nothing to write home about. Inputs feel delayed, and the whole control layout is just weird; why does pressing A hide the HUD? Why does X bring up the pause menu? Why is R the shoot button and E the reload button? These are questions I kept asking myself while playing the game.

Fleshforward has this presentation that presumes it will play like a turn-based RPG, but instead it has this awkward real-time combat system. You get a weapon fairly early on, you can press W to equip and unequip it, the gun fires a projectile straight ahead damaging whatever it hits. But the damage seems to be based entirely on RNG, so it can take anywhere between 1 to 4 shots to kill something. Meanwhile, the zombies can damage you just by looking in your general direction, so engaging in combat just results in you losing health while the zombies are still approaching you.

The game also has this “stealth” mechanic where you can press C and your character will start to tip-toe around like a cartoon character in an attempt to avoid the zombies, but it only works about half the time. Sometimes I would be hiding in the shadows only for a zombie to spot me several feet away, and other times I “snuck” past a zombie underneath a street light. More often than not I found that the easiest solution was to simply sprint past the zombies instead of taking it slow and sticking to the darkness.

The writing is probably my biggest issue with this game. I get that the developers are Italian, but simply using Google Translate is no excuse for the horrendous writing in this game. There’s an overuse of profanity, which normally would be ok, but when “fuck” is the third word in every sentence it starts to feel forced and unappealing. The game is also rife with typos and awkward sentences. I get that English isn’t their first language, but it’s still no excuse.

The story itself feels pretty generic: cop stumbles into zombie town, cop meets some character who’s actually a bad guy who speaks like a villain from the 80s. The two must work together to stay alive and that’s pretty much it. I don’t have anything to say other than been there, done that.

Overall Fleshforward has a small glimmer of potential. If the developers were to focus more on the atmosphere and tighten up the gameplay then they would have a solid product on their hands, but as it stands, the game plays like someone who learned RPG Maker over the weekend in an attempt to make their own version of Resident Evil. Clunky controls, awkward combat, and the worst stealth system I’ve seen in ages turn the game into an exercise in tolerance instead of an actual video game.

If you’re thinking about maybe picking this game up once it releases, I’d just recommend getting Resident Evil instead.