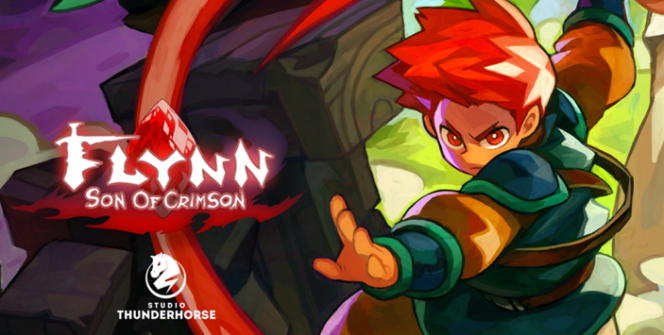 Either someone didn’t get the memo about the shortage of red pixels circulating the surreal memeverse, or the Son of Crimson is personally responsible.

Much like the meme, red is your primary source of power in Flynn: Son of Crimson. I should clarify that by saying Flynn uses a set of blood-red powers to overcome obstacles and crush his enemies.

Based on what I saw from the demo of Son of Crimson, a 2D action platformer still in the early stages of development, those obstacles are also pointed out to the player via their bright red coloration. If you need to climb a wall, smash a boulder, or swing on a knob with your grappling hook, those interactable objects are all highlighted for you.

The demo also showcases a range of crimson weapons: sword, axe, boxing gloves, and bow, which is mapped to a separate button for some fast sharpshooting action.

At first, I thought the idea behind these weapons was to quickly switch between them based on the enemy you’re facing, though I didn’t feel the need to swap weapons in the game’s current state. Creatures have different attack patterns you can dodge after observing them for a moment or two, but they seem killable regardless of your weapon choice. At the moment it seems the only distinctions between items are damage and speed, which may make more of a difference in later stages of the game.

Son of Flynn is best played with a controller, as the developers point out before the title screen. Controls and platforming feel natural, and the game plays smoothly for the most part, except for the occasional hiccups you can expect when you delve into demo territory.

So far, it’s hard to tell exactly how the promised Metroidvania elements will come into play, but the game does show inklings of satisfying combat and fast-paced gameplay. It’ll take more exploration in the game world to see how Flynn fares against tougher enemies with more complex attack patterns.

With lovely pixel-art graphics, strong art design, and a charming soundtrack, the game seems to be starting off on strong footing. According to developer Studio Thunderhorse, you can expect the full game to include a rich story, new combat techniques and weapons, varied environments and a companion creature to help you explore and bash baddies.

The devs expect Flynn: Son of Crimson to launch sometime in 2019.