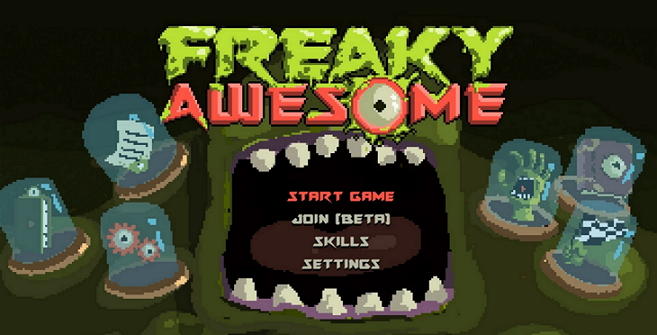 35 hours have gone by since you started looking for your dog. Sam comes across an old abandoned factory, in a desolate landscape. After falling into the basement and landing in (what is assumed to be) toxic waste, you change completely: a hunch grows out of your back, your legs grow thin, and you can shoot green globs as an attack?

In any case, you’ll have to adapt in order to survive. You play as Sam, a previous action hero who’s hell-bent on rescuing his dog, Cox… even if you mutate into a beast.

*Opening scene of the game, the front door would be MUCH too easy…

Freaky Awesome, developed by Mandragora [official site], is a hectic action rogue-lite game, each play through offering a new experience with many variables affecting your approach. The layout of the factory, the enemies, and the mutations available will change with each run. So not only does the game mutate to your skill level, it’s a fresh factory map on each playthrough.

This isn’t the only variable to worry about: mutations happen at random, adapting to the player’s skill for the best method for gameplay. The more enemies you destroy, the more green goo to heal you up, the faster you’re going to mutate into another beast. Each character includes new skills (or lack thereof) which create the necessity to stay flexible in your play style.

Grab up to 3 friends for a co-op (online or local) experience that will multiply the fun. If not, there’s a solo mission mode option as well. Freaky Awesome was released on October 18, 2017 with ‘Mostly Positive’ reviews on Steam. What sets this game apart from other rogue-like action?

“Explore a mutating world: the game itself mutates!”

The map is randomly generated, but the game itself changes with every successful run: new unlocked locations and enemies, bigger levels, stronger bosses, and new mechanics. Slay bosses to unlock their forms as a newly available mutation, increasing replayability.

Outright, Freaky Awesome, has visuals that bring you right back into the 90s action-hero motif of yesteryear. A wide bird’s eye view allows the whole room to be visible, often containing moving elements in the backgrounds. The animation is a little bit choppy (to fit the style) but it’s charming in execution.

Reminiscent of other arcade classic, this is a game that deserves a seat in a cabinet. Game exploration has elements similar to the “Legend of Zelda” with a room-to-room side scroll giving you a brief moment to determine the threat of enemies before you have to engage them.

Effects from hitting enemies and the transitions between mutations are a pleasure for the eyes to see. Hand drawn sprites & effects look fantastic as you spend your time roaming rooms, collecting goo, and destroying enemies.

*2nd mutation will choose the next upgrade available to you.

Freaky Awesome is the perfect moniker to describe the sound design of this game. Pulsing music, an electronic feel, industrial sounds, and a vibing bass. It’s just the right music to keep you motivated and alert during gameplay. The original soundtrack employs dubstep-esque grooves, it comes together very clean suiting the gameplay perfectly. Each attack is accompanied with the classic “WA-PSHH” sound often heard in cartoons from childhood.

This game is as much a pleasure to listen to as it is to see.

*First boss fight, what will the mutation be after beating them…?

Clean design, tight controls, and the right groove to keep you going. This game is a trifecta in action rogue-lite video games. For only $10 right now on Steam, it’s a game that is worth the purchase: replayability, challenge, with randomizing elements leave an impression of wonder as you begin each journey. What will the factory hold for you this time? Hurry, Cox is waiting!

Wait …would a dog remember a mutated owner? Asking for a friend…