Games Are Changing: The Evolution of Video Games

Home » Games Are Changing: The Evolution of Video Games 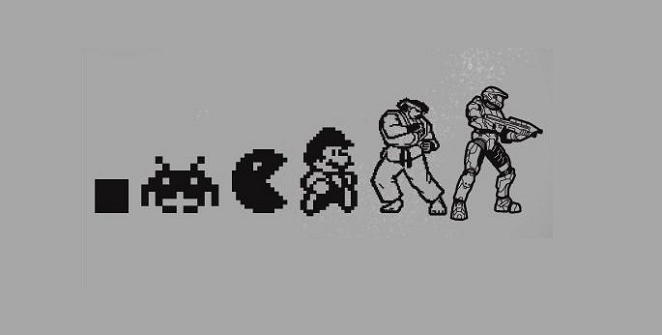 Do you remember your first video game? I do. My father let me play his 1989 original Game Boy when I was probably four or five years old. My favorite game was Super Mario Land, while his was a golfing game I found to be boring. By this time, however, my father was almost forty so he didn’t really have any more time to play games. With a daughter starting school and having a full-time job that required he travel fairly often, this was where I had to take the reins myself.

Though I stopped regularly gaming once I started high school, it was always interesting to watch the industry change from the outside with each big new advance in technology. While it seemed like a series of small progressions at the time, technology has changed a lot in the past twenty plus years.

My point is that technological advances can be viewed microscopically through the crazy world of gaming. If you’ll follow my train of thought for a second, you can see how the video game industry has evolved and remained a living representation of such changes and continues to be so.

The first thing I ever bought with my own money was Pokémon Red to play on Dad’s Game Boy. I remember soon after playing my friend Delilah’s Sega that her older brother left behind, where we discovered Sonic the Hedgehog and his companions late hours into the night. Together we followed these early gaming systems through changes in modern technology. We travelled to the Game Boy Pocket and soon to the Game Boy Advance, and years later my family got a Wii when I was in high school.

With the Wii I found myself experimenting with Wii Fit for exercise. Standing on the balance board, I recall thinking about those first games I played on my Dad’s Game Boy, and how far this technology had come. By the time someone gifted me a Nintendo DS in college, complete with Pokemon Black, it was almost unrecognizable from the first game I bought with my own money twenty years ago. And these systems keep changing. It will be interesting to see what gaming systems come up with in the next twenty years.

2. It’s Allowed Us To Game With People All Over The World

Before the 90s, video games primarily existed in arcade settings and minimal personalized instances. Even when we started seeing multiple major hardware developers enter the world of gaming (Sony, Microsoft), most of us still didn’t foresee a time that we could realistically play games with other people as a worldwide community event.

But it happened. And it was a big deal. I still remember when friends of mine in high school would have LAN parties – that is, they would link their Xboxes together and all play Halo (some of the most annoying drunk calls I’ve ever received came to fruition at LAN parties). Prior to that, in third grade, my friends and I would battle each other in Pokémon by using a cable to connect our Game Boys together. But none of us foresaw the interconnection of real people all across the world playing games with each other via the internet.

Now gaming is accessible across multiple platforms and community gaming is common among most gamers. The accessibility of opponents and people to play with has reached beyond our wildest dreams.

There are undercurrents of real-life application in videogames we rarely consider or think of. For instance, driving games used to be, well, just driving games. Their most realistic applications were that turning the steering wheel left turned the virtual car left. However that has now changed. The advancement over time of driving games and other vehicle simulators has allowed gamers the opportunity to actually learn driving skills just by playing. Even when you’re playing a crazy Grand Theft Auto-type game, these games still deal with the physics of real world automobiles in taking corners, high speeds, and the like.

This doesn’t only apply to vehicles but another great example is flight simulation. Flight simulators can be so realistic that they’re recommended to pilots before they ever start to fly. We see that the games themselves haven’t just become more realistic, but they’re helping people in the real world too.

The first time I played through the Ocarina of Time was in college as my family did not have a Nintendo 64 growing up. My parents assumed it was a waste of time. I’m glad to say as an adult that they may have been wrong! My critical thinking and puzzle solving tools were challenged to the max and I honestly think I’m a much more thorough person and out-of-the-box thinker having played it, as lame as that may sound.

Puzzle game franchises like Portal and Little Big Planet work on these same skills today. Strategy games like XCOM and Civilization help train people to plan things well and think situations out before they act. And of course you can’t forget hand eye coordination taught through first person shooters! See here for more examples, but the point is that with more diversely designed video games and storylines used, gamers are being taught how to think in ways they didn’t previously. The games have gotten smarter and so have the gamers.

5. Simulating Other Worlds and Universes

We are now able to use computers to create and simulate Tolkien-esque imaginary worlds, hypothetical universes, and to live out stories within them. It seems that the more realistic our simulations look , the more we can simulate our imaginations.

You see this in an array of open world games. Everything from Mindcraft to Fallout lets us live in a different world and experience it as a place, not just a story. The possible universes we can come up with are endless, and now we get to see what it’s like to live inside them. This has become a staple of gaming, and it’s all possible with the help of technology.

Pushing one technological standard calls for pushing others to meet it. For instance, game website designers have to keep up with the quality of games they’re putting out and are now using CMS formats like Drupal to accomplish this, rather than using old tools and formats – because the way the games are represented matters.

This isn’t only seen in gaming, obviously. Once smartphones became popular, wireless game controllers only became more popular. Things like Bluetooth, internet connection, systems in which Netflix, Hulu, Youtube and the like are connected — all of these things are competing to be more high-tech and relevant than their competitors. So as technology pushes onward, different formats challenge each other to innovate in similar fashions.

7. Popularizing and Reaching Into Pop Culture

Video game references abound in books, movies, television, pop culture, and the like. You’d be hard pressed to find an adult or child of any age who does not know who Super Mario is, even if they know nothing about the game. With this cultural relevance, what kind of real world imprint has gaming left on society?

Well, sometimes video games teach people about pop culture. For instance a large amount of people who never listened to the radio have discovered their favorite music from video games. They’ve been inspired to pick up instruments after games like Guitar Hero and Rock band.

Even Microsoft’s own staff was torn on whether or not they should build a gaming console. Of course now we know that the Xbox has proven to be a major asset for them. But with the popularity of anything digital there will always be someone who says “this takes people away from the real world.” Television, cell phones, and the like will always be penalized for this by society and video games are no exception.

Being resistant to change never helps humanity and as far as technology advances, we should be seeking positive ways to use it. At the very least, gaming has influenced the use of technology, and without it we may live in a very different world. So regardless of criticism, we must acknowledge human progress, even if indirectly, has been encouraged and moved by the technological advances that were influenced by video games!

How has gaming enlightened your life? Where do you see it going in the future? Let me know in the comments below.