Invisigun Heroes Review: Too Fast to be Seen with the Naked Eye

Home » Invisigun Heroes Review: Too Fast to be Seen with the Naked Eye

What’s more difficult than shooting an invisible target? The answer lies in the unique gameplay of Invisigun Heroes, which conceals all heroes—including your own—in a stealthy game of PVP mayhem designed to make you think before you shoot.

At first glance, Invisigun Heroes seems difficult to master. Each player-controlled character must navigate a single-screen arena in a battle to out-stealth and outsmart your opponents—all while your characters are cloaked in an invisibility field. The game is tricky at first, but the smooth controls and balanced gameplay make it easy to learn and get comfortable with your abilities as you play.

Here’s how it works. Up to four heroes will be spread out in four corners of a map, with their locations revealed, until the battle starts. You can shuffle around the arena as the clock counts down. Once three seconds pass and you all go invisible, the fun begins.

You can use several methods to uncover a hero’s location (or give away your own). For one, your hero will briefly show up on screen after firing a shot or activating your unique ability. You can also track other players’ movements through various environmental cues, like rustling bushes, splashing water, and footprints, forcing you to respond quickly to any changes in your surroundings.

In order to win a match in Invisigun Heroes, you’ll need to keep track of all these moving parts while using your guns and abilities judiciously. You usually can’t go in guns-a-blazing without getting yourself into trouble. If you get lost, a quick shot can re-situate your character on the screen, but it can also give away your position to others. The game challenges you to think on your feet without over-relying on any one of its mechanics—whether it’s stealth, bluffing, shooting or using a special technique—to win your matches.

The game may sound frustrating, and it is. That’s part of the fun—especially when you’re playing with friends. The game is so fast and hectic that, inevitably, your screwups will make you smile or laugh more often than they’ll induce you to ragequit.

Invisibility is somewhat of an equalizer. Once they learn the basics and get past the initial roadblocks, every player has plenty of opportunities to try different tactics and use the environment to their advantage (or get caught in new traps they didn’t see coming). With several battle modes and dozens of varied maps to stage your battles, you’ll also find plenty of variety to keep you entertained.

The game’s heroes are its shining stars, as they should be. Their endearing character designs make it difficult to pick favorites, and their unique abilities offer plenty of potential for addictive gameplay in several different play styles. Whether you’re dashing across the arena, stomping the tiles around your hero, or creating portals to catch your enemies unawares, you’ll find plenty of ways to keep things interesting. 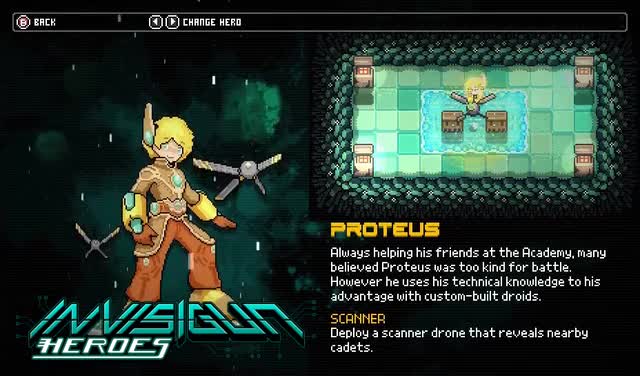 Invisigun Heroes features both local and online multiplayer, as well as a single-player challenge mode for those who prefer to play solo. Since the game’s release earlier this year, it seems to have had trouble with its online matchmaking, perhaps due to a dwindling online player base. Since multiplayer is really the way to go with this game, players may prefer to play locally with friends or online using a private code.

The matchmaking may be a major pitfall for some, and the nature of the gameplay may be too vexing for others, but Invisigun Heroes has several outstanding qualities as a PVP stealth shooter. It calls for vigilance and subterfuge without the slow, methodical pace of traditional stealth games. It challenges your reflexes and your observational skills while offering endless potential for fun. To cap it all off, the eye-catching graphics and colorful art style hold plenty of appeal for new players and veterans alike.

All in all, Invisigun Heroes is perfect for parties or jamming on the couch with your friends. It is currently available on Steam for PC, Mac, and Linux with a promise of cross-platform multiplayer on major consoles at a future release date.