Once you get the keys to the kingdom, it can be hard to let them go—and even harder to survive the challenges they will inevitably bring your way.

Kingdom: New Lands is an extension of Kingdom, a side-scrolling strategy and survival game that earned a loyal indie following with its unforgiving yet addictive gameplay. New Lands adds a variety of new content to the base game, including new NPCs, mounts and obstacles to help or hinder the Monarch’s campaign.

In Kingdom: New Lands, your only goal is survival. Sure, you can build your kingdom, recruit citizens and amass unthinkable sums of gold to improve your fortress—but your true objective is to escape the Greed, evil creatures that threaten your rule (and your life) with nightly attacks on your kingdom. To that end, you’ll have to rebuild your Monarch’s ship and sail to freedom before your defenses are overwhelmed by ever-escalating attacks. 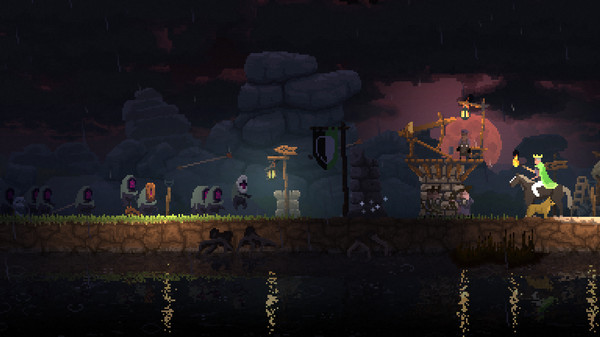 Each session can end in one of two ways: either your Monarch sails away to freedom (and the next island), or the Greed steals your crown and ends your rule. Don’t be fooled by the simple premise. The game may a minimalistic appeal, but it comes with deceptively complex gameplay mechanics and a great disdain for hand-holding.

As you explore each of the five islands in succession, you’ll find wandering vagrants you can hire to build and defend your kindgom. Your citizens all have clearly-defined roles, and at first they’re easy to manage. Bowmen hunt and fight the Greed, workers build walls and munitions, and farmers work the land as a reliable source of coin. You’ll learn to work with the many moving parts of your kingdom with minimal instruction.

As the game progresses, however, you’ll be faced with a growing number of questions that can only be answered by trial-and-error. How far can you send your builders before they walk into danger, and how do you make sure your hunters always have enough game to fund your next build? The list of questions only gets longer as you discover new types of citizens and buildings with different functionalities.

To play Kingdom: New Lands effectively, you’ll need to be patient and observe your surroundings to truly understand the consequences of your actions. For the most part, the game gives you a fair chance to learn and test theories while you build up your settlement. If your kingdom is overrun by monsters, or if you ran out of coin in the middle of winter, it’s usually because you overextended yourself or failed to plan ahead.

In other situations, the game can undo hours of careful building with one poorly-timed glitch. One bug stalls the progress of a wall upgrade, and with no way to issue commands to have your builders continue the job, you’re stuck with an empty space that offers zero defense against monsters. Managing your citizens can also be frustrating, because they sometimes put themselves in harm’s way for no discernible reason, or run to defend a side of your settlement that isn’t under attack.

Although the game can get very frantic very quickly, it feels like a deeply meditative experience. Aside from its occasional spikes of intense, nerve-wracking moments, it has an overall solemn and tranquil feel, due in no small part to the game’s gorgeous pixel graphics and charming soundtrack.

If you’re a fan of thoughtful strategy and exploration, Kingdom: New Lands has plenty of mysteries to keep you thinking for hours on end. Far from insurmountable, its challenges are perfectly weighted to turn your thirst for knowledge into an obsession. The game could benefit from a few bug fixes and tweaks to NPC behavior, but overall it feels very smooth and intuitive to play.

If you do pick up this title, I urge you to stay away from the online Wiki as long as possible. The best way to learn about Kingdom is to play it yourself. Once you learn to work with the randomly-generated landscape and manage your resources, you’ll be well on your way to rebuilding the Monarch’s ship—and to reaching the next island, where you’ll get to do the whole thing over again.