Life on the Rim: a Rimworld Review

Home » Life on the Rim: a Rimworld Review 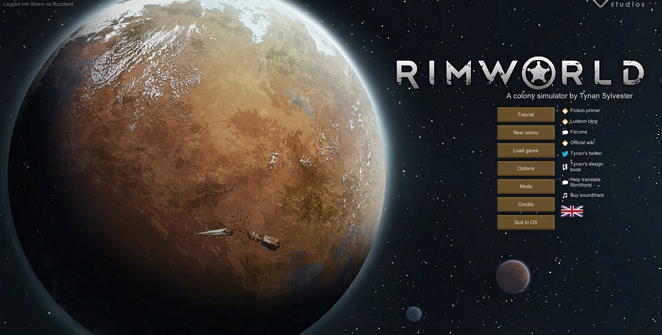 Maybe you and your companions awoke from your cryptosleep sarcophagi to the sound of sirens, making it out of your ship just in the nick of time. Maybe your tribe was devastated by the great blood machines sent by the gods, and are now without a home. Maybe you’re a rich socialite, bored with your glitterworld lifestyle and yearning for adventure amongst the stars. Either way, you find yourself on an unknown Rimworld, and you’ll have to utilize all your physical and mental fortitude to survive.

Rimworld is a space colony management sim along the lines of Dwarf Fortress, only a little more simplistic and a lot easier to pick up and play. Developed by Tynan Sylvester of Ludeon Studios, a Montreal-based game studio of which he is the founder, I’ve watched it grow from its infancy, and while my bias might be showing, I think this game is a definite must for any fan of colony management games that emphasize storytelling.

With three selectable AI-Storytellers, Rimworld utilizes emergent storytelling in lieu of a definitive plot. Each AI will analyze the situation your colonists find themselves in, and in doing so will select events they think will make for the most interesting story. Coupled with each of your colonist’s personality traits, which range from the good (kind characters grant a mood bonus to those who speak with them), the bad (a pessimistic colonist will have a permanent mood penalty) and the ugly (creepy breathers are universally reviled, and pyromaniacs will set your base on fire), the story unfolds while you play, and no two games are alike.

The three starting scenarios, like most of the game, are completely customizable. Whether you choose to start with three crash-landed survivors, a displaced tribe or a wealthy glitterworld native looking for some excitement, you can hand pick your colonists, cycling through a random generation of skills, traits, backstory and intersecting relationships until you’re satisfied. The characters, though randomly generated, are balanced, and you will be hard pressed to find a good character without some sort of crippling personality trait, or a bad character with no redeeming qualities. Apart from the colonists you start with, you will collect more over time, either through capturing and recruiting raiders, or by assisting those in need.

The game generates a whole planet, with biomes from tundra to arid plains, which contain different animals, plants, diseases, temperatures, rainfall, mineral resources, and terrain, as well as unique sets of difficulties (surviving in a snowy, arctic tundra, for example, requires a vastly different skill set than in the jungle). Trade and travel across the planet is possible, and relationships across different colonies are more pertinent in newer releases, with the addition of peace talks allowing you to mend your hostile relationships, while the ability to raid opposing factions does just the opposite.

Colony simulators are notoriously difficult to get into, and the learning curve is generally very steep. While Rimworld is intended to be played on harder difficulties, you have the option of using the scenario editor upon starting a new game, which allows you to choose the specific tech, knowledge and materials you begin with (to help get your colony on its feet), and any mod you could ever want is available to you through the Steam Workshop. Also, while each AI-Storyteller has their own unique set of parameters, they each have the same difficulty options, ranging from peaceful, wherein your base will never be attacked, to extreme, described in game as the option for those who “enjoy digital suffering.” From an adaptive teaching system that watches which facets of gameplay you’re have difficulty with, and unobtrusively attempts to guide you, to a newly instituted tutorial, it’s not necessary to sink upwards of fifteen hours just learning how to play the game.

On the opposite end of the spectrum, it is also possible to make the game more difficult. The AI Randy Random, set to a high difficulty, will bombard you with increasingly ridiculous scenarios, sometimes with no downtime at all in between them. You can be raided, hit with flash storms and blight, or attacked by herds of man-eating beavers, all without a second to breathe. With permadeath mode enabled, you are unable to revert to an earlier save file to fix your mistakes, and if your entire colony burns to death in their beds because they’ve all slipped into catatonic breakdowns, then too bad. However, even a bitter end is not an ending in this game. If your colony is wiped out, you still have the option to continue playing, watching and waiting for a new colonist to enter the map and take up refuge in the corpse ridden, burned down wreckage of your old base.

There technically is a definitive end to the game: your goal is to construct a spaceship and make it off the Rimworld you’re stuck on. And it is possible to achieve. However, it’s extremely time-consuming if you are just starting out, and in the end, it feels a little anticlimactic. About midway through the game, no matter the difficulty you’re playing on, it gets much easier to survive. You have all the technology you need, you have (assuming you’ve been recruiting and not just murdering) more than enough colonists to get work done, and you’ve built up a sizable, defendable base. The hardest part of Rimworld is the beginning, when you are just a handful of civilians with no food, shelter or security, just trying to scrape by in a world that (more often than not) is actively trying to kill you, so once you’re past that, the difficulty drops off immensely.

But I would argue that the beginning is the most boring, as well. As I’ve mentioned before, Rimworld is not a competitive survival game… it’s a story generator. Its merit lies in its emergent storytelling, in the world that is fleshed out and the lives of the colonists that unfold as you play. Every time you start a new scenario it is completely different from the last, and every decision crafts a new facet of play that you may never have seen before, culminating in a rich, lived in world that you would never have expected from a colony management simulator.

For your consideration, here is the scenario I just ran through (and the one from which all of these screenshots were taken):

Crey, Sappy and Risa, three crash-landed civilians, are struggling to make it by in the hard, Boreal forests of an unknown Rimworld. They landed on the beach, and have set up a decent colony but are running low on food. Fighting against the clock to get their crops planted and harvested before the long and arduous winter, two huskies self-tame and join the colony. Their names are Grace and Boogie-Woogie.

Initially, the colonists are loath to let the dogs in. They’re running low on food as is, and these would be two more, largely useless, mouths to feed. But the dogs are cute and friendly, and they make the colonists happier when they nuzzle them, so they decide to let them stick around. Crey, in his downtime, even begins training them, and forms a close bond.

Soon, there is a pirate raid, and the base is attacked in force. New colonist Lenka is trapped outside the walls with no means to defend herself, and is slowly being stabbed to death. Without a moments hesitation, Grace and Boogie-Woogie rush past the gates, Grace pulling Lenka to safety while Boogie-Woogie mauls the attacking pirate to death.

The dogs are hero’s, and as the seasons progress, they do their part to keep the struggling colonists alive. They rescue fallen colonists, haul materials and food, and assist in hunting animals. But the winter is cold, and eventually the colonists run low on food. Slowly starving, they head out into the wilderness in search of animals to hunt, but there is only a single grizzly bear, one who hasn’t seen food in as long as they have, and when it catches sight of Boogie-Woogie, it attacks, killing the brave dog instantly.

The whole colony rallies. This wasn’t just a dog, this was their friend. Each colonist, armed with whatever long range weapon they could find, sets out to hunt the bear. Unable to stand against the combined force of their onslaught, the bear falls, with Grace dealing the killing blow on behalf of her sister.

The colonists now have a bear to eat, and are able to last the rest of the winter by carefully rationing its meat. Boogie-Woogie is entombed in the colony’s burial chamber, where Lenka lovingly engraves her sarcophagi’s with a mural entitled “Blue Boogie-Woogie.” And every morning, Grace pays a visit to her sisters resting place, paying her respects to the brave dog who saved the colony.

It’s a ridiculous story, right? But it’s a fully fleshed out one that, as a player, begins to tug at your heart strings. When that pixelated husky was mauled by that stupid bear, it was midnight where I live and yet I still couldn’t help but shout “Boogie-Woogie, no!” at the top of my lungs, to the chagrin of my sleeping neighbours. And while I may have embellished a little for the sake for story-telling, not one piece of that story was invented by me. That was all generated through Rimworld’s AI-Storyteller, based on my decisions and how I played the game.

There’s a reason the most popular threads on the Rimworld Sub-reddit are ones sharing player stories.

Rimworld is not a game for everyone, and seasoned colony sim players might not enjoy its rejection of the norm, but if you are looking for a game that is easy to get into, that’s immersive in its own casual way, and has a wonderful, non-intrusive soundtrack, you should definitely give it a shot.

Elisabeth Conrad
Eater of pizza, wearer of odd socks, and player of video games, Liz can most often be found in her apartment in Toronto, Canada with a controller in hand and a cat on her lap. After being introduced to gaming at ten years old with Super Mario World and A Link to the Past (when she could wrest the controller away from her dad), she has been hooked on side-scrollers and adventure-RPG’s since. In recent years she has developed a love for indie games, in particular colony management simulators, story driven point-and-click adventures, and spooky scary survival horror. For more on Liz (and an indiscriminate amount of cat pictures), follow her on Twitter @glizfindel.