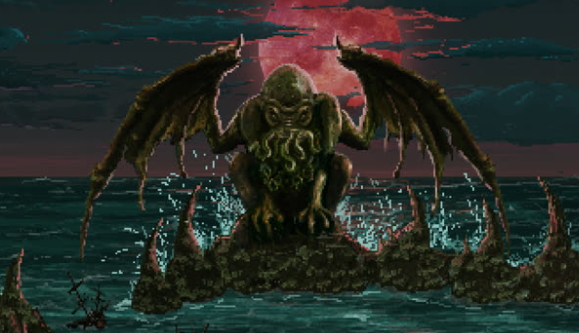 I’ll be honest: I know nothing about the works of H.P. Lovecraft. I know he built a world of fantasy-horror stories, but that’s as much as I can confidently say. Luckily for newbies like me, Lovecraft’s Untold Stories seem to be just that: untold stories. The main character, a detective by the name of John Murphy, doesn’t return any Lovecraft-related results when you Google him. This leads me to believe this game is merely inspired by the dark and chilling themes of Lovecraft’s stories. Even with my limited knowledge of that world, I can see the beginning of an intriguing rouge-like in Lovecraft’s Untold Stories. 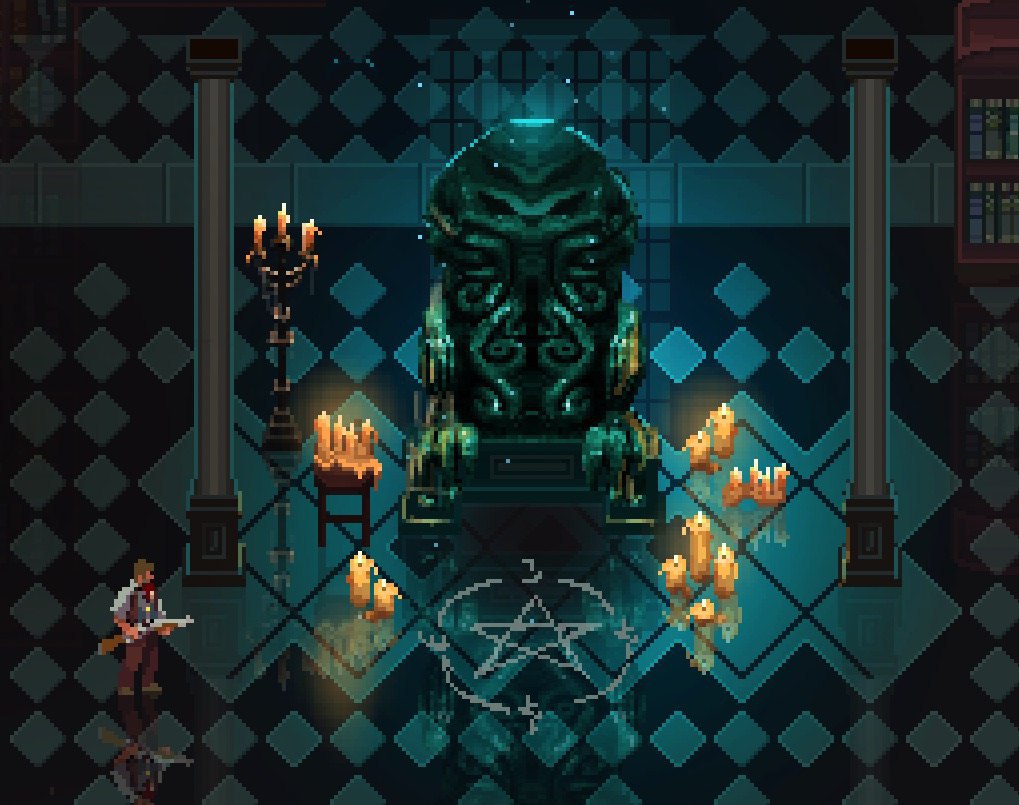 It’s very well-written, which is appreciated when a game relies so heavily on text. Don’t get me wrong, there are many well-executed components that contribute to the atmosphere, but text is a pillar. Before the gameplay starts, there’s a character selection screen that gives a bit of backstory to the character you choose. While only one character is playable in this demo, it’s safe to assume all future characters will get similar treatment. The paragraph of John Murphy’s past as a detective is intriguing, as it makes reference to his mentor making a sudden retirement. The implication that something weird is going on makes a great first impression on the player, and it wouldn’t have had the same effect if it wasn’t as professionally written as it is. After picking your character, the first level’s loading screen has a short blurb about the old mansion you’re about to enter. It’s incredibly descriptive, and it does a great job of immersing you into a world you haven’t even seen yet. 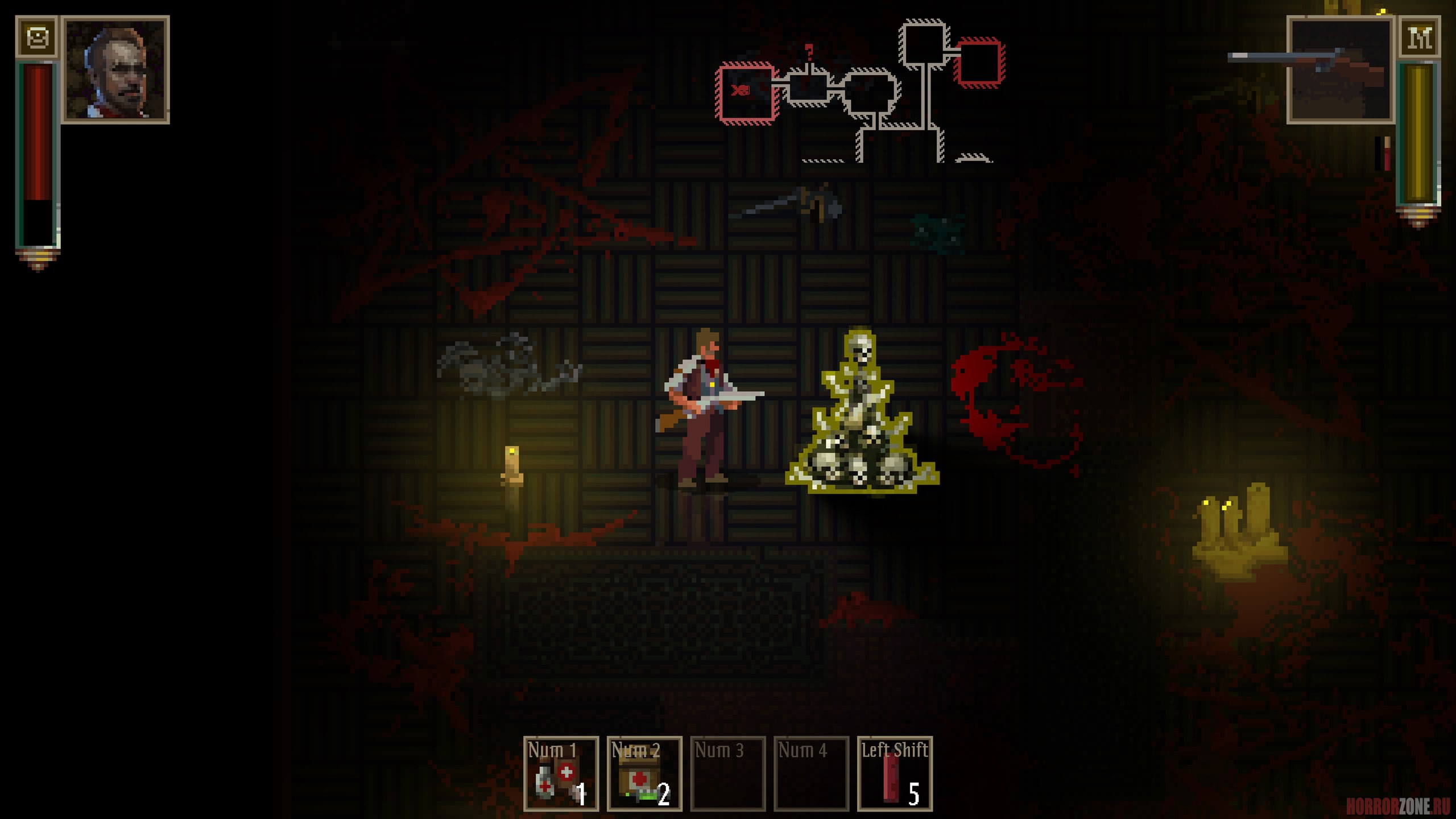 When you enter the mansion, things begin to feel familiar to veterans of the rouge-like genre. The first room has doors on all four walls, which lead to branching paths of semi-randomized rooms. You’ll find crates with healing items, items you’re meant to sell, money, ammo, and keys to open locked chests around the mansion. Some rooms have groups of enemies who move quickly and hit hard. Many of them cause you to take damage over time, with poison or bleeding effects, making these short combat sessions quite intense. All of the pixel art for the enemies, the features of the room, and the player are impressively crafted. The animations are fluid and expressive, and the colors match the eerie themes of the game quite nicely. Pair the visuals with the soundtrack, which is as ominous and dark as one might hope when playing a game based on the Lovecraftian lore, and you have a very atmospheric environment to explore.

While it does this quite well, the game sticks a bit too closely to the average rouge-like formula. Some rooms have interesting pieces to interact with, such as a strange electronic device and dissected human corpse with bite-marks. Upon interacting with them, a dialogue box describes what you’re looking at in vivid detail. You choose what you want to do with each object, usually resulting in a loss of sanity or a gain in information points. The impact your sanity has on the game is unclear, but the info points are spent at one of the shops you’ll encounter on your adventure. Despite the game’s best efforts, most rooms feel the same. The combat is a four-directional shooter that is common among rouge-likes, but the ability to throw dynamite and roll is a much-needed touch. Most crates have the same kind of items in them, and replaying the whole level after you die makes the lack of variation more apparent.

Even though Lovecraft’s Untold Stories is based on a world I know nothing about, this is still the most immersive rouge-like I’ve ever played. The intense amount of time and effort put into the visuals and music is apparent. Few games in this genre can boast about its writing, while Lovecraft’s Untold Stories absolutely nails it. My only hope is that more variation can be added to the common rouge-like formula. I’m afraid that the atmosphere of game won’t be enough to keep players coming back in the highly-competitive rouge-like market, because overlooking this expertly-crafted love letter to the stories of H.P. Lovecraft would be a tragedy.