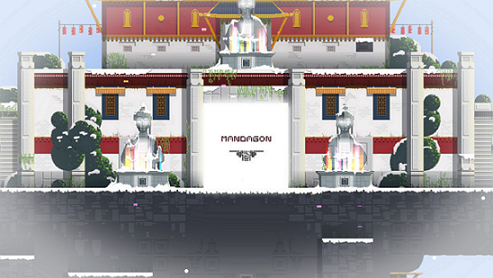 Every once in awhile, you find a game that resonates with you on a spiritual level. A game that entices the mind, pleases the senses, and awakens the soul. As cliche as it sounds, it’s true – the medium is capable of helping the gamer reach a higher plane of understanding and can really move the player emotionally. There are very few games I’ve played that do this naturally; Shadow of the Colossus and N.E.R.O. immediately come to mind, but after that I struggle with finding more of this caliber. It’s not often that we think of free-to-play games as being worth playing, and we certainly don’t think of putting them in the same category as a game as valued and praised as SOTC. Yet Mandagan proves that a game doesn’t need to cost a cent to be worth its weight in gold – a must play sans the pay.

Mandogan, developed and published by Blind Sky Studios, is the perfect marriage of Tibetan theology and pixel art. The storyline is not explained, but inferred from interactions from stone relics or statues. Each statue you come across recites a verse of a poem, and through this poem you are able to determine what the story is about. Without giving too much away, the story goes that you, a small stone statue capable of moving, were once a father to a sickly daughter, and you asked to take her place so that she may live. Without being overly dramatic, it’s touching and poignant in a way that surprised me.

The aim of the game isn’t very clear from the beginning, but it soon becomes apparent: you must collect six tablets and place them in the proper altars in order to remove one lock from a seemingly important door.

The controls are very straightforward: WASD keys are directional, spacebar is jump, and “E” initiates action. The graphics are beautifully done with gorgeous aesthetics and vibrant colors. The animation is fluid – nothing sticks, nothing jerks – everything runs beautifully. The music is a perfect fit to the visuals; audio effects that sound mystical and deep are interspersed here and there alongside the songs, further setting the mood to be mysterious and ethereal.

There is a “final boss” at the end, but I won’t go any further than that. As this game can be beaten within an hour and is completely free, I’ll let you decide for yourself how much you love this game since you really have no excuse to not play it.

What I enjoyed the most were the little touches the developers added that weren’t necessary but definitely enhanced the feel of the game. When the character was travelling on stone, the water was opaque. Should the character fall into the water, the liquid would suddenly become transparent and the world above became a bit more distorted. The background featured buildings off in the distance to add to the depth of the scene. Occasionally, wind chimes would billow in the breeze and fire would flicker and sway as wisps in the wind. The setting and mood were absolutely stunning – the developers knew exactly what they were doing.

Mandagon proves that free-to-play games are still worth our time. They can often be shovelware, downloaded and forgotten like yesterday’s save, but in this case, the opposite is true. I only spent about an hour of my life on Mandagon, but I’ll remember its impact for far longer than that. The game truly is a work of art, and one I cannot recommend highly enough!