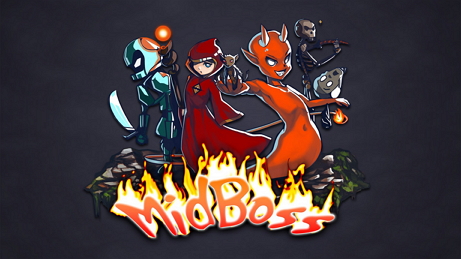 With the sheer amount of games that are available to the masses these days, it’s really hard to recapture that sense of wonder and hilarity that we used to have with games of yesteryear. Sure, there are tons of titles that brag about their ability to take us back to the good ol’ days, but how many actually achieve this feat?

Enter Midboss: perhaps the most rouge-like game since…well, Rouge itself.

Created and developed by Kitsune Games, Midboss was released on Steam on May 25th and is currently being sold for $14.99. With “Very Positive” and “Mostly Positive” ratings, gamers have clearly spoken – this game is definitely worthy of any Steam library.

The developers describe Midboss as such:

“Kill your enemies, possess their bodies, and take their abilities as your own in this turn-based procedurally generated death labyrinth. You play as the imp, the weakest monster in the dungeon. Tired of being bullied by the other monsters, you set off with your sidekick Mid to descend to the deepest levels of the dungeon, defeat the final boss, and take his place.”

Which is way cuter than it sounds, honestly. This has a lot to do with the art-style and dialogue, which is just…adorable.

To expound, the art-style is pixelated, but not in the trendy 8-Bit fashion that is so common these days. It was actually refreshing to see what was essentially a “low tech” game aim for more when it came to design. The dialogue is snarky and has a childlike sense of humor that really adds the charm to the title. The music is…catchy, definitely, but extremely repetitive. Not necessarily complaining about it, because it won’t get stuck in your head for hours on end, but it would have been nice to have more music diversity.

The main mechanic of the game is that you play as an imp who can possess the bodies of your enemies and level up their abilities. This ensures that players will be running around the dungeons doing their best to find creepy crawlies to inhabit and then find even more to practice their newfound attacks on. It really had that “gotta catch ‘em all” feel to the game that I really appreciated, as it made me want to stick around and play as long as I could to unlock all those abilities.

Don’t think for a second that because this game is so quaint and charming that it isn’t hard – be prepared to die a lot and throw your controller a lot. I walked away from this game several times, swearing that I wasn’t gonna play again, but Midboss and I both knew that that was a lie and I’d definitely be back for more. It’s addicting and enjoyable on levels that I didn’t think were previously possible.

One thing I wish the devs would have put in Midboss was the ability to hotkey items. I feel like that was something of an oversight, but simultaneously don’t feel it’s a deal-breaker either. Just one of those things on the wishlist for sure!

Midboss is the most rogue-like of all the rouge-likes. Retro gamers will be sure to enjoy this title with a twist – one with humor, wit, and unending creativity. Literal hours will be wasted on playing the lowest tier enemies possible just so their abilities can be maxed out – all in the name of completion. This game *must* be in your Steam library. I can’t recommend it enough!