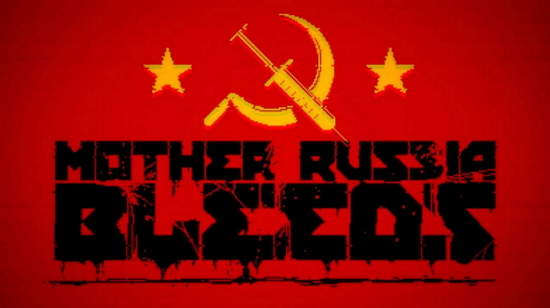 Mother Russia Bleeds is a fast paced, action packed gothic-psychedelic violent sleazy filth fest, and I love it. Hands down the best neo-retro beat ’em up, if not the best neo-retro game this year. Now I know that is a bold statement, and I try to uphold a no hype policy, but this game, in all honesty, walks the walk and talks the talk. Mother Russia Bleeds gives you the content that games such as Streets of Rage or Final Fight could never deliver under their corporate iron curtains; this game has big freaking balls and they swing proudly, shadowing the beat ’em ups that came before it. Mother Russia Bleeds does not innovate the genre with anything fancy, which is not necessarily a bad thing, what Mother Russia Bleeds does do is give the beat ’em up genre an 80’s grind house exploitation paint job which is to say that it is uncompromisingly true to its genre. The game stays faithful to the time-tested beat ’em up formula that we all love and grew up playing during the 16-bit era. The formula works and If it ain’t broke don’t fix it. This is a good thing, as sophisticated innovations could have hampered the overall playing experience.

Unlike most retro beat ’em up’s Mother Russia Bleeds tries to deliver an interesting plot, mixing in double-crosses and a resistance uprising. Though there are some very funny and witty dialogue moments, this soon becomes marginalized by the fighting.

If Mother Russia Bleeds was a movie it would be the greatest exploitation movie ever made, think Machete meets Escape From New York meets Irreversible, that’s the only way to describe the narrative of this game. In fact, this IS an exploitation game, It is utterly offensive, repulsive and macabre, but the good kind. Mother Russia Bleeds is seemingly unapologetic in its delivery of deep throat gagging mayhem, that pumps you up to kick, punch and headbutt your way through waves of degenerates, deviants and delinquents, right up to the gluttonous corrupt Bourgeois diplomats in charge of everything, you even get to fight a bear. Mother Russia Bleeds is just the game I always wanted but never thought anyone would ever be allowed to make or have the balls to make… thank god for indie developers.

Mother Russia Bleeds has a distinctive grimy pixel art style, the graphics are dark and saturated, setting the mood perfectly for this almost Orwellian repressed Cold War Russia. Despite the darkness, the game is beautiful and has some absolutely breathtakingly stunning moments, the art style is flawless, and the backgrounds and sprites are rich with detail and animation.

The fighting is pinpoint accurate, there are no cheap deaths and no moments of frustration, everything seems smooth and responsive as you literally button bash yourself into a frenzy of gore-soaked mayhem. This game has some of the finest pixel sprayed claret ever to be seen in a game, it just feels so satisfying. Mother Russia Bleeds also features an arena mode where you fight waves of enemies to earn points and unlock different power syringes to use in the main story mode, this gives each run through high replay value.

You have a selection of four unique characters to choose from, each with their own unique moves and stats that are varying, each character is balanced differently forcing you to mix up your play style from character to character. Also, each character has an exclusive and funny taunt that they can perform, my favorite is Boris’s turd hurl… You just have to see it to believe it.

My only complaint is that there is slightly too much dialogue for a beat ’em up, this is a game, not a Tarantino movie. Also the spaces between words is so small all of the words seem jumbled together, making it hard to read at times. But that is it, that is my only complaint, the only thing I could find wrong or nitpick about this game is it’s text. The difficulty spike of this game is pretty high even when set to easy, and I have heard that the keyboard controls are a little strange, but who in their right mind plays a beat ’em up without a controller? Also, apparently this game was supposed to support online multiplayer, but this has been scrapped for an up to four player local co-op instead, which should not deter anyone from buying this game, as it is freaking awesome.

Now I love Streets of Rage, and in my opinion, it is the greatest beat ’em up of all time, however, I believe Mother Russia Bleeds may have just stolen that spot and become my new favorite beat ’em up of all time. I really don’t know what to say other than just buy this game and bask in all of its violent sleazy glory… This is a must play; already cementing itself in the annals of video game history as a cult classic, it is absolutely spectacular.

So grab yourself a controller sit down and bash some buttons until you are self-diagnosed with Carpal tunnel syndrome. This is a perfect beat ’em up and it delivers the goods ten fold. Mother Russia Bleeds is out now and available for the Steam, PlayStation 4, Windows, Linux and Mac OS

Mother Russia Bleeds is here, it is mean, it is angry, and it is a masterpiece.