Mustache in Hell – A Twin-Stick Shooters Trip Through Hell

Home » Mustache in Hell – A Twin-Stick Shooters Trip Through Hell 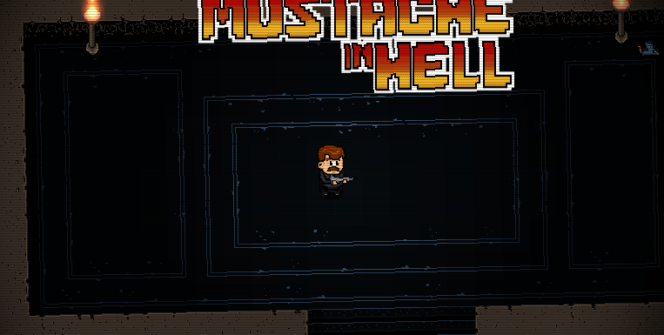 Officer John Mustache awakens to find himself in a strange place, a limbo, and needs to make a deal with the Reaper in order to regain control of his life. After realizing his mortality, John is tasked with obtaining specific cubes of power; guarded by mythological creatures. He will have to venture through different levels of hell and face the unknown with weapons he discover along the way. Intense gameplay alternates between gruesome shoot-em-up battles and labyrinths within each level to keep the action fresh and your mind working.

Mustache in Hell, a game created by Iduna Soft, is a retro-style comic game with sharp difficulty, quick action, intense battles and satisfying exploration / puzzle solving. This game takes a page right out of the formula that makes titles like Smash TV and The Legend of Zelda so enjoyable. Elements are used from different genres that blend together in one cohesive experience that is hard to put down.

Running at a buttery smooth 60fps keeps the action fluid and responsive, which is exactly what’s needed due to the amount of enemies you’re expected to mow down. The amount of enemies you encounter would put some MMORPG’s to shame. Mustache in Hell supports a controller or keyboard / mouse set-ups, though the keys are not remappable. Still in it’s alpha stage and recently available on Steam, this game is sure to pack more punches with future updates to gameplay and features.

*Officer hit! There aren’t many health pickups during swarms, so stay on your wits!

Mustache in Hell uses a mix of retro pixel art combined with a dark and grim atmosphere. The comic-like graphics are clean and distinct from one another, never allowing confusion between different characters or enemies. After encountering a handful of bosses and clearing lots of rooms, a trio of egg-shaped demons (with vomit as their primary attack) led to my demise.

As mentioned previously, this game moves at a fast pace which demands your attention. One slip up or wrong move and you’ll find yourself quickly overwhelmed and begging for grenades. The swarms of enemies are a force to be reckoned with, my initial play through lasted for the first 2 levels. The enemy AI in this game requires the player to be focused and nimble or you won’t last very long. Weapons and projectiles are dropped often to increase the likelihood of survival.

When battling hordes of enemies, it’s all too important to have music that can keep the adrenaline flowing and  pressure on the player. This is exactly what the music in Mustache in Hell accomplishes, it’s metal compositions during the action are intense. But when the game switches gears and is more exploration / puzzle-based, the music follows suit with a curious theme and poppy rhythms with spooky elements. There is nothing more to be said, it’s simply the perfect companion for the gameplay.

Although the control scheme is not remappable, it is still fairly easy to learn and master. Movement and aiming are done on each hand or each analog stick. While shooting and dashing is performed with other buttons or mouse commands. Mustache in Hell uses an 8-way aiming profile which is reminiscent of classic arcade shooters and beat-em-ups. Retro gamers (especially those familiar with 80’s arcades) should feel right at home.

*Just one of many, many bosses you will encounter on your journey through purgatory.

Mustache in Hell combines the best elements of action, puzzles, and dialogue which fulfill all the requirements for a great game. Although still in its Alpha stage of development, it presents over 5 playable levels with more updates to be announced in time.

Considering the fact that you can pick up a copy for under $4, it definitely will fit the budget of even frugal gamers. If you enjoy Smash TV, Gauntlet, or Zelda, then you’ll have a great time with Mustache in Hell, check it out on Steam now!