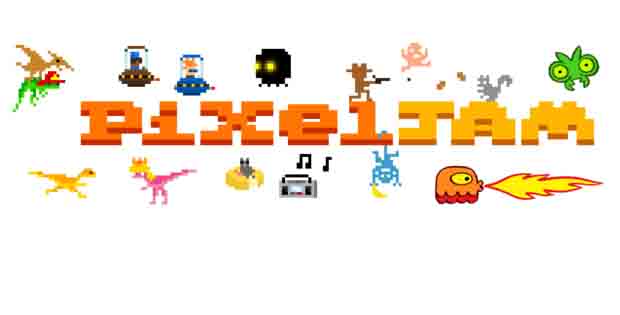 This month, we were able to get a great interview with Miles Tilmann of Pixeljam games (creators of Potatoman seeks the troof, Glorkian Warrior, Dino run, Retro Unicorn Attack and more). They are best known for their utilization of pixel art design and retro gaming aesthetics in most if not all of their games. They are true retro game lovers and it was awesome to get some more insight into the team, what inspires them and what makes them tick. Check out our interview below!

RETRONUKE: When and how did the Pixeljam team come together?

Miles Tilmann: The 2 founders, Rich Grillotti and myself, met in art school and became roommates in a few different cities after college.  Sometime in 2005 in Chicago we realized that we didn’t like our day jobs are were ready for something new.  Rich had an inclination for super low-res art and animation, and I was just teaching myself to code.  It seemed like a no brainer that we would try our hand at making games.

You can actually see the original inspiration for the name “Pixeljam” here:  pixeljam.com/art … this was done by rich and myself before we ever touched a line of game code.

RETRONUKE: A lot of your games have retro/classic gaming aesthetics (sidescrollers, pixel art, action/adventure etc). What inspires you guys to create games of this type?

Miles Tilmann: We’re old and that’s what we played growing up 🙂  Rich has definitely kept up with modern gaming, but I’m firmly stuck in the 80’s and 90’s.  I have a wife and kids, and between that and Pixeljam, I have no time for these newfangled “3D” games…

RETRONUKE: What made you guys want to make games in the first place?

Miles Tilmann: Same thing that probably makes everyone get into the scene… a sincere love of gaming and the possibilities within it.

RETRONUKE: What major challenges do you feel many indie developers face in the gaming world today?

Miles Tilmann: Oooof, I could go on and on about this.  It’s definitely a totally different climate than it was when we started in the mid 2000’s.  Back then you could just make a great game and the world would probably take notice.  These days you have to make a great game, take your clothes off on the internet and scream obscenities at celebrities on twitter just to get noticed.  All kidding aside, the market is probably 100X more saturated than it was 10 years ago, and the main challenge these days is just getting noticed.

RETRONUKE:  What advantages over major studios do you feel indie developers have?

Miles Tilmann: Agility, flexibility… we can fail and still land on our feet.  We can pivot quickly and adapt as needed.  Although we tend to be broke, which often leads to bad decision making and operating out of struggle, which is never ideal.

RETRONUKE: I first found out about the studio when you guys released Retro Unicorn Attack. How did you guys get involved with Adult Swim for the project?

Miles Tilmann: After we released Dino Run they contacted us about making some original games for them.  I think we made about 10 with them before we did RUA!   In fact, I think RUA was the last game we did for them…

RETRONUKE: Collectively, what is your favorite game you have released so far?

Miles Tilmann: Hmmm, I’Il bet Rich would give a different answer.  Mine is probably Potatoman Seeks The Troof, and I imagine Rich’s is Dino Run. I could be wrong though…

RETRONUKE: What games laid the inspirational groundwork for you guys to get into game development?

Miles Tilmann: For me, it was Commodore 64 titles like Bruce Lee, Impossible Mission, Delta Patrol, Toy Bizarre, Paradroid, etc.  And probably the music of Rob Hubbard.

RETRONUKE: What Indie Games are you excited to get your hands on this year?

Miles Tilmann: Umm….  well I wish I actually played games, but I’m sorry to say that I don’t really.  I know that’s pretty bad, considering it’s my profession.  I do keep up with it though, and the ones I’m excited to at least see *other* people play are Below (Capy), The Witness (Jon Blow), No Man’s Sky (mainly interested to see if it can match the hype it’s getting), and of course Starr Mazer, but that’s not for this year 🙂

RETRONUKE: What’s next for PixelJam games? Any new projects in the works?

Miles Tilmann: We’re steadily getting our existing catalog of games onto iOS and Steam, and that’s a lot of work!  Glorkian Warrior comes out for Android on March 12th, and then Steam on March 24th.  After that we’ll be releasing a free browser based game with 16-bit style pixel graphics (much higher rez than we normally do) in April, and then in May and we have a few more smaller games to be released on mobile and /or Steam.

We don’t have any *big* games in the works, however.  We’re just taking small steps for now and making careful moves towards some sort of unknown destination 🙂

RETRONUKE:  How can your fans get their hands on your games? (Steam, Desura etc), and whats the best way for fans to follow the team?

Steam is the best place to get our Mac / PC titles:

And they are both currently on iOS as well:

And our flagship title, Dino Run:

It should be coming to Steam soon, but we don’t know exactly when.

And then of course we’ve made plenty of free games: