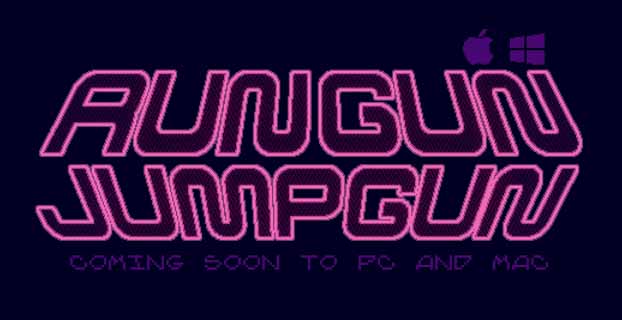 Sometimes you just need a good old fashioned, tough as nails arcade game to play, am I right? Too often when I play new video games do I get the sense that they were trying to make a movie, rather than really putting work into gameplay. A focus on cinematic experience can sometimes cause some games to lose what really makes them …. well games. If you feel like you want something a little different and If you’re a glutton for punishment like I am, you’ll be pleased to hear about a new title from ThirtyThree games. This three person indie development studios latest release RunGunJumpGun, has been labeled as a “Satisfyingly Infuriating Psychedelic Runner-Shooter”. Quite a mouthful, but it actually illustrates the idea of the game very well. Fans of games like Hotline Miami, Enter the Gungeon, and Hyper Light Drifter, will appreciate it’s retro aesthetic, need for controller mastery, trippy visuals, and fast paced action. With just two buttons, one to fly and one to shoot, players will find themselves flying through obstacles, blasting thorough walls, and dying millions of times. Though it has a simple mechanic, the games pulse pounding soundtrack and fast pace keep your hands firmly gripped on your controller. It’s almost like Flappy bird, except you’re flying through space on bath salts with a jetpack and a massive mini-gun. All in all, if you’re a fan of science fiction, and looking for some hardcore fun that will demand your engagement, maybe RunGunJumpRun is a game you should throw on your STEAM wishlist right now.

Watch the trailer for RunGunJumpGun and let us know what you think about this “Satisfyingly Infuriating Psychedelic Runner-Shooter” in the comments section below!