Streets of Rogue Review: They Let You Do What?

Home » Streets of Rogue Review: They Let You Do What? 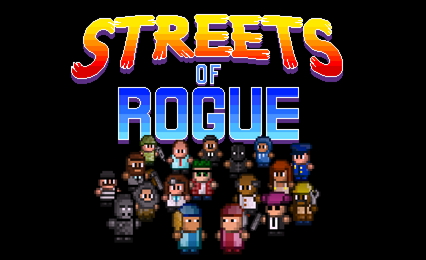 Streets of Rage, released in 1991 for Sega Genesis / Megadrive, was the story of badass cops who take to the streets, bringing the fight to the criminal syndicate which has thrown their city into chaos. The thing that really made it stand out for me was that you could choose to join the bad guys and become the head of the syndicate. It wasn’t the first game to offer alternate endings, just the first one that made me sit up and say “whaaaat?”

After that came Chrono Trigger, Knights of the Old Republic and Grand Theft Auto. Most recently, Legend of Zelda: Breath of the Wild was shown to have a mind-blowing range of options. The possibilities available in games are insane and I’m not actually sure that there are even boundaries anymore. We’ve come a long way from 1991. But when I saw this game, I knew I needed to play it (and not just so I could write this).

In the free demo version of Streets of Rogue, the roster of playable characters includes archetypes such as “soldier,” “hacker” and “thief.” It also has more… unique… options, such as “jock (you are as dumb as a bowl of fruit),” “werewolf (you can go berserk)” and “investment agent (you’re rich but addicted to drugs).” That should tell you the kind of ride you’re in for.

Violence is definitely plentiful here, and it’s not a game to bust out in polite company. Oh, did I mention the drugs? Many a time, an unmarked syringe will be found, so of course you have the option to inject yourself with it. The investment agent and comedian characters even start with cocaine in their inventory.

Video game soundtrack aficionados will likely harbor fond memories of the theme to Streets of Rage 2, and while they obviously couldn’t just steal it for Streets of Rogue, I’m happy to report that the theme used is surely a callback, complete with 90’s club music vibes. At a first glance, this looks like a mashup of Gauntlet and (original) Grand Theft Auto, and plays much like how you’d expect it to.

You run around completing quests, and when everything is either finished or failed, an elevator to the next level can be used. There’s only so many things you can do: kill this person, get that item (which is probably on a person), rescue this person (or gorilla), or destroy that thing. Levels are randomly generated right before you enter them, and each time you pass a level you might get an extra ability.

There are a few quirks about going through this game which really highlight its absurd nature, and might affect your gameplay experience just a little bit, if you aren’t successful at switching your brain all the way off. If you play as the doctor, you can walk up behind people and knock them out with chloroform. I’ve almost never gained any kind of agro from doing this – not even from doing it to a bunch of gang members all standing next to each other. I did agro some bodyguards when I did it to the drug dealer they were protecting, so there’s that.

You can also have sword-wielding, gimp mask-wearing “slavemasters,” guarding their (purchasable) slaves, and police officers are just happily strolling around the cages. I’m going to go ahead and look at this as a hilarious and unfortunate collision of unrelated factors in a randomly generated video game, rather than some form of thinly-veiled social commentary. Interestingly, if you’re playing a hacker and a cop sees you remotely trying to access a computer network (really now, is an advanced information technology degree a requirement for entry into the police academy?) they agro and break out the batons.

The free demo only offers a quick-start option, as well as a limited choice of how many people can play at once. There is a paid version available on Steam, which offers such extravagant extras as additional characters, quests, modes of play, and the ability to save your game. That isn’t to say that this made for an incomplete experience. Quite the opposite, actually – the inability to save your game added to the fun. In most rogue-like games I’ve played, the “no saving” was a feature, and I think they should have just gone all-in with that here.

The wide variance in randomly generated levels and quests made this a perfect “mindless fun” experience. Some levels were very difficult for many characters, and if you were interested in completely avoiding combat or bloodshed, they would even be impossible. You do get bonus points for using stealth, completing missions without using guns, not killing anyone, and so on. However, if you were set on going as far as you can without at least indirectly causing anyone’s death, you’ve definitely got your work cut out for you.