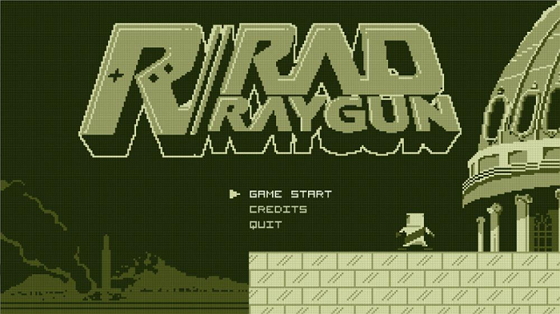 You’ve seen plenty of games that take inspiration from gaming consoles of the 80s and 90s, but there’s one console that rarely gets the spotlight. Super Rad Raygun is not only a great Mega Man style platformer, but an expertly crafted love letter to the original Game Boy. The nostalgic murky green colors, the amazing chiptune music, and the way the game controls really take you back in time.

Rad Raygun, a robot with a blaster for an arm and a GameBoy for a body, is awoken by his creator, Dr. Y, to defend the United States from a Communist invasion. The whole story is a parody of various 80s action clichés. Saving the president, stopping an oil spill, and fighting goth villains are some of the things you’ll experience in the year 198X. Unfortunately, I feel like the actual story becomes buried in the random and wacky humor, but is implemented into the levels really well. The gameplay and level design evolve with the story better than most platformers I’ve seen in recent years.

There are some very obvious parallels to the Mega Man games. The jumping and moving really control with a similar sense of gravity and speed. Also, Rad’s arm is a gun. You find batteries hidden within each level which are used to upgrade your health, blaster, energy, etc. You can also use them to unlock agility abilities, such as sliding and dodging. A cool thing about the upgrading system is that your batteries aren’t stuck to whatever upgrades you choose. For example, if your batteries have been spent on agility and energy, you can move those batteries to your health or blaster upgrades at any time. It’s very useful.

Other than that, the gameplay really isn’t anything new. It doesn’t have to be unique to be fun, and it is a fun game. There’s a boss rush mode in which you try to defeat all of the bosses as fast as possible to compete with high scores from around the globe. Another cool feature is the use of palettes. You unlock them by beating levels, and each one lets you see colors other than the classic GameBoy green. It’s a really cool feature, and I found myself playing through each new level in hopes of unlocking another.

I like this game. It’s unique in the sense that it pays homage to an often neglected handheld, but it’s very similar to many other platformer shooters. Its visual aesthetic and retro music make for a charming jump-and-shoot. I will definitely come back to it to unlock all of those color palettes.