Terraria Review: More Ore than you can handle!

Home » Terraria Review: More Ore than you can handle! 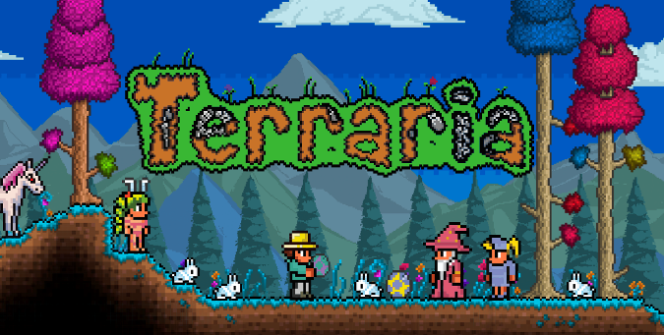 Terraria, a game created by developers Re-Logic, Head-Up games and Engine Software, doesn’t care to explain itself. But would rather have you discover for yourself what lies beyond your map as you begin. Don’t let this outward appearance fool you, this game is rich in exploration and action. It starts off a bit slow but steadily increases the intensity and difficulty until you unlock Hard Mode, granting new ores, weapons, and crafting options. There are major freedoms for creativity and ingenuity in this game.

*Example of a simple house base, fully loaded with rooms, chests, and crafting tools

Right off the bat, it should be noted that Terraria basically functions in the same form as Minecraft. There’s lots of crafting, mining, and tinkering to be done, but takes place within a massive 2D side-scrolling world to be discovered. You’re plopped into a seemingly harmless environment with your first NPC friend, a guide, whose main concern is not really explaining things, but attempting to help regardless. You must build a shelter by sunfall, this is all you’re told. 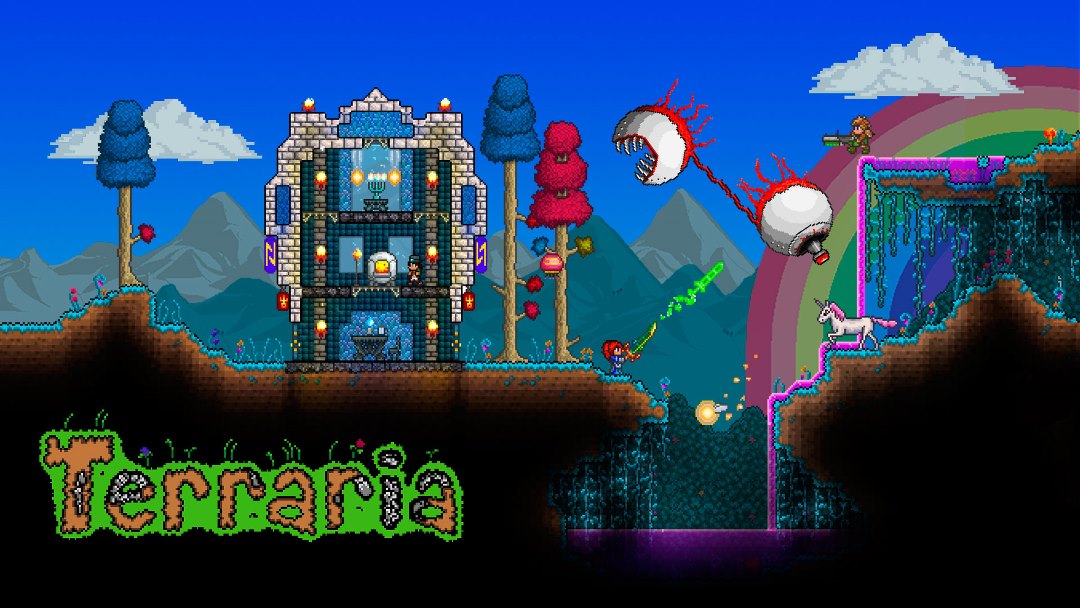 *A glimpse at Hard Mode and it’s “Hallowed” environment, featuring a boss named The Twins.

The learning curve for beginners is steep as this game has different ores to be found and mined, weapons to be designed, and armor to be forged. There are different crafting combinations to be learned and mastered, though there are no intentions by the game to teach you what they are. The player is solely responsible for researching exactly how to succeed at this game. These combinations multiply upon reaching Hard Mode, lending to its appeal.  The game starts off a bit boring and monotonous, but by the time you’ve found your first dungeon, you’ll be fighting off hordes of enemies that definitely keep you on your toes.

*You’ll often find yourself cornered while trying to mine at deeper levels, eventually leading to the Underworld.

The gameplay is straight-forward with a HUD that displays a toolbar for quick-select items, a health meter, a mana meter, and your mouse to select on blocks or aim at enemies. There are a plethora of items and weapons to be crafted, generally dictated by the role you want to perform in game. You can focus on Ranged, Magic, or Melee to deal with different enemies, dungeons, and bosses. There are different areas to explore, each with their own enemies, environments, and individual dangers.

*A collection of armor that can be made in this game. Lots and lots and lots.

Progression through this game is not measured by a storyline or time passed, but rather by the equipment you have available to you. Dungeons can be found before you’re ready to conquer them but you’ll be an easy target if unprepared. The amount of items you can create before setting after these areas is determined by the number of NPC merchants have moved into your main base. You’ll have to accommodate their living space in order for more to come along and stick around.

As you jump, hook shot, or even fly yourself around this game, you’ll be doing it with finesse. The controls are solid and perform quite well. WASD handles your movement, jump is on spacebar, and a feature called “Smart Cursor” is bound to Ctrl. This option allows your cursor to switch between one block selection to a 3-block sweep that is most useful when mining or digging holes. They perform well whether you’re spelunking for minerals or are in the heat of a gunfight with the Wall of Death.

The graphics of this game are reminiscent of the Super Nintendo 16-bit era, although the light effects are quite colorful and bright. You’ll discover underground landscapes that are both vibrant and frightening. This combined with the amount of enemies you’ll be juggling between mining and exploring, are a feast for the eyes to behold. These graphics are simply gorgeous and it’s one of the reasons I’ve personally purchased this game on 3 platforms now. Between the pixelated graphics and fast-paced mechanics you’ll definitely enjoy this game.

The music in this game will strike you as soon as you enter the main menu. Terraria has a bouncy, electronic feel that is often countered with live strings or wind instruments. The blend of these two spectrums allow for some creative songs that only bolster the total experience, really pulling you into the gameplay. As the days turn to nights or as you travel deeper underground, the music will shift to signal for danger or new areas. You’ll be immersed in themes that will keep you focused and alert.

Terraria is often called a Minecraft copycat, but it only borrows similar mechanics and reworks them into new and fun experiences. The action is slow going at first due to its learning curve, but once you become a master, you’ll definitely tank as many hours as I have into it. It’s a great game that only gets better with each patch.