The Librarian is a beautiful, if short, piece of interactive pixel art

Home » The Librarian is a beautiful, if short, piece of interactive pixel art 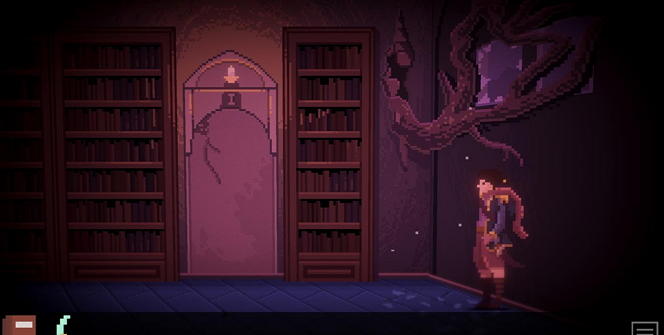 Upon booting up The Librarian, the single person project of developer Octavi Navarro, you are immediately swept up by the sounds of a crackling fire, howling wind and the simple message: “To my dad.” Right out of the gate, this short point-and-click puzzler verges on eulogistic. The care that went into the creation of this game rolls from the screen damn near palpably, and because of this I want to approach The Librarian with a careful touch. I may not know the exact sentiment Octavi instilled it with, and I will probably never grasp the reality of what it means to them, but I get the feeling as I play it that I’m not supposed to. It’s not for me. Instead, The Librarian feels like a piece of art therapy, someone else’s emotional reality sprawled out on a computer screen that I’ve been invited to peruse almost voyeuristically.

Admittedly at first, I was a little miffed by my exclusion. I ran through the game twice, culminating in thirty minutes of total playtime and both times I was left hanging. There was no neat little bow wrapping up the story. There was no payoff to what the game had set up. Why were all the other librarian’s dead and desiccated? Who was the evil shadow monster that accosted my character on the way out of their house? What purpose did the broken key in my inventory serve?

The game sets up intriguing little snippets of world building set pieces, from a lonely, wintry town littered with skeletons to a monstrous shrieking crow, but never follows through. Coming from a literary background, and due to the penchant of point-and-click adventure games to hinge themselves around narrative structure, I (wrongly) assumed that The Librarian was going somewhere with the titillating bits of intrigue it set out in front of me.

My questions went unanswered, and when the credits rolled I was at a loss of what to do. How could I write about a game that kicked me out before I could really get to know it? Playing it again, hoping to find branching paths or another ending that was more satisfying, I discovered that no, there wasn’t any other option. There were only the handful of linear puzzle’s I’d already encountered, and the single ending that left me feeling let down.

Something wasn’t adding up. 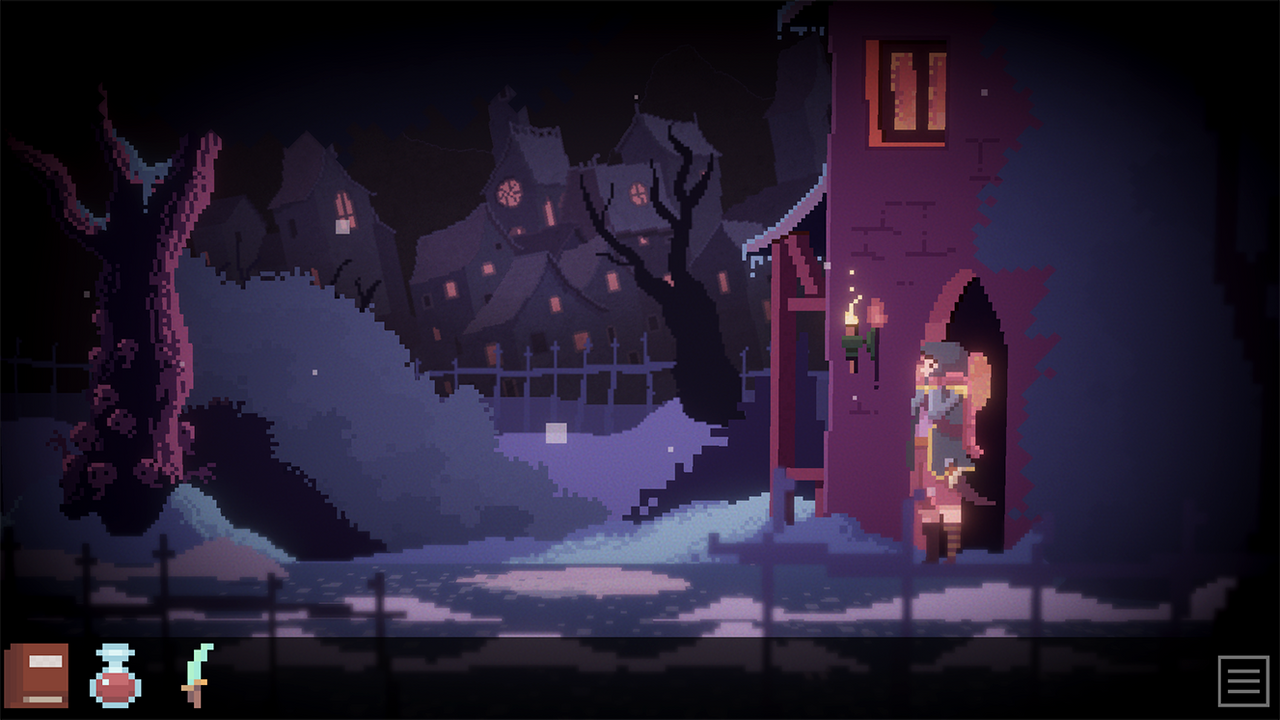 The Librarian is lovingly crafted. Each pixel is rendered meticulously, and every scene is a work of art. The main character’s shoulders rise and fall as she breathes, her breath wafting like a cloud past her lips in the cold. Her bedroom feels warm and welcoming, multidimensional and when the windows blast open with a gust of chill wind you grieve the loss of its comfort, as though you were in there with her. Her movements are easily recognizable and complex, and when she shrugs her shoulders or burrows deeper into the hood of her shawl, she feels human.

The care that went into the artwork of this game is astounding, completely surpassing any pixel art game that I’ve played previously. And it’s not as though I’m an abhorrer of the genre. On the contrary, I’m a fan. I’ve been playing video games since consoles were running at an 8-bit capacity. Zork was my version of Skyrim. I’ve written extensively on the merits of pixel art games in affording indie developers an accessible, flexible medium for their art. I actively seek out new, innovative pixel art games because I honestly enjoy them, and will forever be a proponent for their artistic merit.

So, if The Librarian is sitting at the front of the pack in terms of construction and artistry, how has it lagged so far behind in the development of its story? It makes no sense that Octavi would put so much hard work and consideration into the art and construction of the game, only to phone it in on the plot.

The answer is, funnily enough, found in the puzzles. 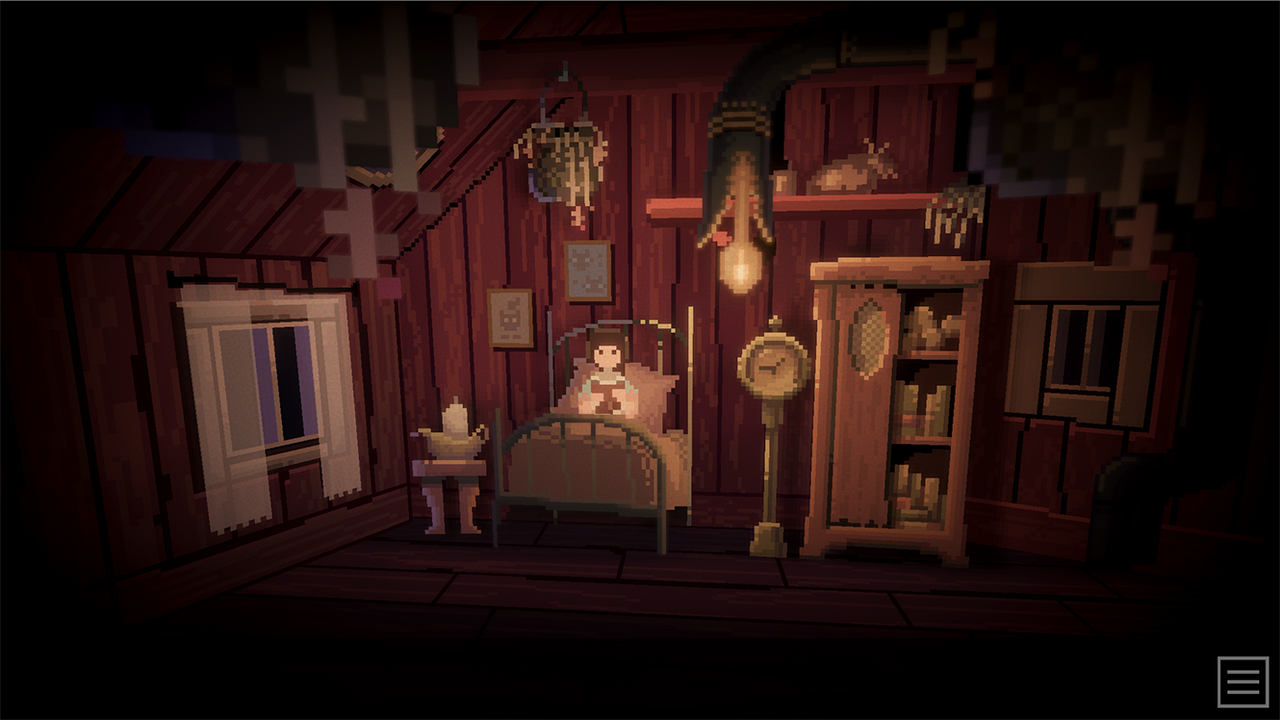 There are only a handful of them in the game, and while none of them confounded me to the point of consulting the generously supplied walkthrough, they weren’t jarringly simple, either. They required a keen attention to your surroundings, a degree of thoughtfulness and in some instances, the willingness to move backwards through the levels you just progressed. But most importantly, they meshed well with the tone of the game. They felt as though they were really something you might encounter in a dark, eldritch library, locked away from the public and scattered with the corpses of your predecessors. Their existence never detracted from the game, instead they added to it, avoiding the tonal dissonance that is the pitfall of many puzzle games.

And in a game wherein the plot is held at arms length, one that never grants me the satisfaction of knowing what the hell is going on, the fact that the puzzles seem to work so well within the world built around it only compounded my frustration. They intrigued me and left me wanting more, before ultimately dropping me on my ass and telling me that was it. In light of this, I can only assume that the plot was never intended for me. Whatever deeper meaning there is in this game is concealed for a reason, and my participation in this game is not to figure it out. Its merely to bear witness.

Remember how I said The Librarian felt eulogistic? Well, the point of a eulogy is praise someone you care for, to offer them words of love and gratitude, to recount fond memories and share your emotional connection to that person with others during a time of celebration or remembrance. The giver of the eulogy is showing a piece of themselves and their relationship to their loved one, and it is the job of the audience to bear witness, sympathetically and forgivingly. The eulogy is not for the audience’s benefit, their interpretation or understanding and instead its purpose is to facilitate the emotional growth, comfort and closure of the one speaking. The loved one.

The Librarian is a beautiful, short game that is an expression of this connection that Octavi has with their father, and we should be grateful that we were invited to witness it. The point of it is not for us to know and instead, we are granted access to it with a sense of ceremony, clicking through the puzzles and immersing ourselves in the love and care that clearly went into a polished, well crafted, deeply personal game. Approaching it as one would a point-and-click adventure title like Monkey Island for instance would only end up doing the game a disservice and would besmirch your enjoyment of it, so for those of you intrigued enough to check it out, please keep that in mind. The Librarian may be on the surface a video game, but at its core it is more a participatory art installation that a traditional game.

Elisabeth Conrad
Eater of pizza, wearer of odd socks, and player of video games, Liz can most often be found in her apartment in Toronto, Canada with a controller in hand and a cat on her lap. After being introduced to gaming at ten years old with Super Mario World and A Link to the Past (when she could wrest the controller away from her dad), she has been hooked on side-scrollers and adventure-RPG’s since. In recent years she has developed a love for indie games, in particular colony management simulators, story driven point-and-click adventures, and spooky scary survival horror. For more on Liz (and an indiscriminate amount of cat pictures), follow her on Twitter @glizfindel.