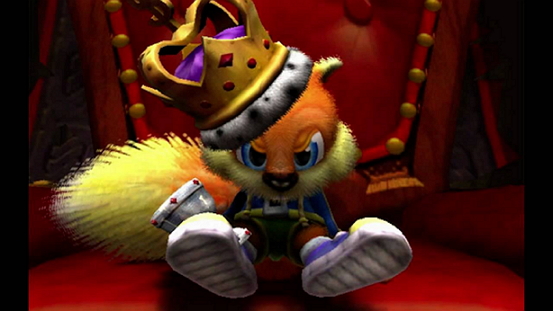 Louise O’Connor worked as an animator and voice actress on Conker’s Bad Fur Day, the 2001 game which combined a child-friendly veneer with bawdy, referential humor in the vein of South Park and Eminem. Originally released for the Nintendo 64, the title has become more than just a cult classic — it’s known as one of the best games of its generation. I recently had the opportunity to speak with O’Connor about CBFD, its legacy and so much more.

She originally came into the game industry by happenstance. “I studied classical animation in college and wanted to pursue a career in feature films,” she said, noting she was a big fan of Disney’s work. “A couple of my friends managed to land a job at a ‘game studio’ in the middle of England, and that’s how I found out about animation in the games industry.” O’Connor applied for a position at Rare, a prominent developer. She got the job and was placed on the team working on CBFD.

By this time, the project had made its famous transition away from a title in the spirit of Banjo-Kazooie. “The foul-mouthed, adult version of Conker is the only version I ever knew,” O’Connor said. “I have a warped sense of humor anyway, so I was quite happy to be able to work on characters that were a bit different. We all had an opportunity to inflect our own senses of humor into the game — some people are more warped than others though!”

Reviewers would later decry the game as sexist or otherwise problematic, but while she was making it at least, CBFD’s content didn’t bother her. “I think you must take [CBFD] as it is,” O’Connor said. “On its surface, it’s a very tongue-in-cheek comedy game.” She pointed out that ultimately Berri, the titular character’s girlfriend, who saves Conker’s life. “There is so much more depth to the world and characters than there initially is on the surface,” O’Connor said. “I didn’t get offended by it. I think it was a product of its time.” Still she confessed the game would likely be different if the team made it today.

O’Connor enjoyed serving as the voice of Berri. “We have an on-site recording studio here, so I would just pop up to the studio and we’d record some lines,” she said, adding that, while the director had a rough script, much of it was ad-libbed. “Honestly, I loved doing the voices — although I think my efforts are terrible. We had so much fun.” As O’Connor pointed out, by working as both an animator and voice actress, she could bring the character of Berri to life in a multiple ways.

O’Connor was only one of three animators on the team. “We looked after all the gameplay animations and cutscenes,” she said. “There are so many animations in [CBFD] — everything was bespoke and full of character. I even learned to juggle so that I could animate Conker’s juggling properly!” Her efforts paid off, as the game is frequently described as one of the best-looking titles for the Nintendo 64. “It makes me feel incredibly proud,” O’Connor said. “I think our passion for the project is what led us to the beautiful end-result.”

During the game’s development, the team didn’t have any inkling they were working on a momentous title, according to O’Connor. “We didn’t have a clue,” she said. “We knew we had made something that we loved and that looked beautiful, but you can never tell whether something is going to be successful.” Though CBFD wasn’t a great financial success, O’Connor enjoys its widespread acclaim. “I love meeting Conker fans,” she said. “Over the years I’ve had the chance to meet so many people who have loved our little game.”

O’Connor was unsure if there would ever be a true sequel to CBFD. “You can never say never,” she said. “I think, if it did happen, it would be very different, as the team [members] have all gone their separate ways now. I know for [Rare], as a studio, it’s not something we’re looking at for now.” O’Connor is currently working on a pirate-themed game called Sea of Thieves. “I’m looking at cool stuff and running a multi-discipline team of very smart and creative people,” she said. “I have the best job in the world.”

Jon Hochschartner is author of “The Animals’ Freedom Fighter: A Biography of Ronnie Lee, Founder of the Animal Liberation Front.” Visit his website at Hochschartner.com.
Share it!TwitterFacebookGoogle +PinterestLinkedin