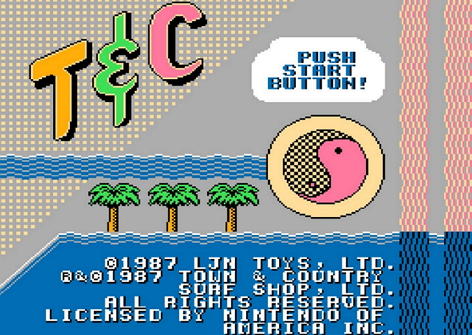 There are a few iconic sounds that remind you of your favorite games: Mario’s coins and one-ups, Sonic’s rings and drowning music, Joe Cool faceplanting and sliding on the pavement. “Ssssshhhh…” — that’s the sound that the world’s worst low-speed road rash makes when you fail at Town & Country Surf Designs: Wood & Water Rage for the Nintendo Entertainment System.

And if you’ve ever played the game, you will never forget this sound. It’s the stuff of nightmares. They might have sampled it for the Halloween movie soundtrack. Some of the game has a lot going for it, despite being an obvious plug for a line of surfing clothes and gear. Do you want to play it? Do you like Nintendo-hard games? Have you ever wanted to surf and safari? We took the plunge for you.

Wood & Water Rage features four characters, drawn from the T&C roster of t-shirt characters known as “Da Boys.” One of these, a monkey known as Thrilla Gorilla, went on to star in a spin-off travesty to this Nintendo-hard title. The other three exist. That’s really all you need to know to start playing.

Okay, a bit more about them. Joe Cool is Elvis in board shorts with sunglasses. Tiki Man is probably Joe Cool wearing a Tiki Mask. Kool Kat is literally a cat in a business suit and, as the only original idea on the list, conspicuously missing from the original box art. Thrilla Gorilla is a big monkey that wears Joe Cool’s sunglasses and Carmen Sandiego’s hat. It’s like some crazy surf and safari combination that crept out of the flash art at an early ‘80s tattoo parlor.

Joe and Tiki are available for skateboarding. Kool and Thrilla surf. You can combine the two standalone modes, alternating between characters. In mixed mode, you get a team that includes one human and one furry beast. Players alternate between crashing on the sidewalk until time runs out and surfing until their teammates get eaten by giant waves. Occasionally, a teammate may actually reach the end of the course. The reward for this is another, longer course; the gameplay repeats until time runs out or until the furry teammates get eaten by giant waves.

So Much Surf Rash

The gameplay on the skateboarding side is surprisingly intuitive and fun, in its own way. Players need some level of NES masochism to truly enjoy it, but challenging yourself to reach higher and higher rounds before time runs out can actually be a great way to spend an hour or so. Gameplay involves spamming one button to speed up and mashing another to jump. Hold back on your D-pad to snag your board for a quick ollie (a jump while holding the board). Try to make it to the finish every time. We dare you.

Surfing is far less fun. Through countless hours of gameplay, we discovered that no one wanted to spend more than a few minutes on this tedious activity. Surf up the wave using the D-pad; surf down the wave using the D-pad. If you want big points, you can try to jump out of the water at the top of the wave and land your jump. This almost inevitably results in disaster. The wave can catch up to you, a random miscreant may appear, or you may inexplicably seem to fall off your board due to what we can only assume is a case of serious surf rash.

Surf rash, in case you don’t know, what happens when you apply your abs to the cheese grater that a surfboard becomes as the wax wears down throughout the day. There are cures and salves for surf rash, but there’s nothing for the sick burn that you get when you fail on this game’s surfing mode. Like the laughing dog of Duck Hunt fame, Thrilla Gorilla and his crew are more than happy to laugh at your pain as you crash and burn (or possibly even drown) on the waves. Sometimes, it’s even their fault.

Turtles, Seagulls and Other Miscreants

Back in the day, LJN partnered with Rare and other studios to develop their games. Atlus, the company that brought the Japanese the Megami Tensei series and gave us some really weird stuff, like the Karate Kid and Friday the 13th NES games, lies at the heart of T&C. They apparently thought the game modes weren’t hard enough. They added turtles, seagulls, and in a bout of rage-inducing mania, random appearances by Da Boys to foul your ride.

One of the best way to snag some free bonus points on the skateboarding levels is to try to ollie up on a turtle, Mario style. It requires split-second timing and is about as likely to succeed as that surfboard jump we mentioned earlier. The turtle lives to watch you faceplant. Similarly, random frisbees, baseballs, oil slicks and other hazards will jump out of nowhere to increase the difficulty as you play. If you hate bad beats beyond your control, T&C is a world of hurt.

The same happens on the surfboard side, but in this case, it can actually be funny. Since most of the surfing gameplay is monotonous, having it broken up by dive-bombing seagulls and random opponents floating on an inflatable lounger crashing into you is fun, right? Everyone except you will think so.

Mad Music (Or Music That Makes You Mad)

If you’re still here, then you’re probably willing to give the game a go. Maybe you’re like us and play games on Hardcore and Insanity because you love the challenge. Maybe this is your one chance for that crazy surf-and-safari adventure of your dreams. And we have good news. The music is great. It’s awesome. For an 8-bit title, they did great things with the background music, which does exactly what it’s supposed to. It’s great fun when you’re winning.

And when you fail, the music punishes you. Like the “sssshhhhh…” of the faceplant, the failure music will become something you hear in the wee hours of the morning when you can’t sleep and are waiting for the alarm to go off for school or work. The music actually sounds disappointed in you. The music wants you to feel bad. You were riding high; now you are brought low. Get back up, do it again, get the great music going … until the inevitable crash. This game is mean.

Wood and Water Rage Is Right

We spent far too much time with this game when it came out in 1988, and it’s one of those few titles that is just as fun as it was at release. If you love an insurmountable challenge, the skateboarding side of Town & Country Surf Designs: Wood & Water Rage tosses just enough randomness at you to keep it fun and entertaining. If you want to laugh at your siblings or coworkers when they try not to fail, the surfing side puts the sado back in sadomasochist. Even better, let the others play the surfing part and hog the skateboarding for yourself — not that we’ve done that.

T&C Surf Designs was quite happy with this game when it came out and promoted it heavily. Counting on nostalgia, they even brought back Thrilla Gorilla and Da Boys as a set of retro T-shirts and stickers in 2016. Still, and all we hear is “ssssshhhhhh…” and some very disappointed music.

Brad Robbins
Bradley Robbins is an old-school gamer who never lost touch with the gaming scene. From his first ColecoVision to the PS4 Pro, he's always had a love affair with RPG, strategy and fighting titles. With over a decade of experience as a copywriter & blogger, "Scratchpad Brad" is back in the writing game after a few too many years in a cubicle slaving away on a team of overnight search zombies, for real! Catch him on Facebook or Twitter.