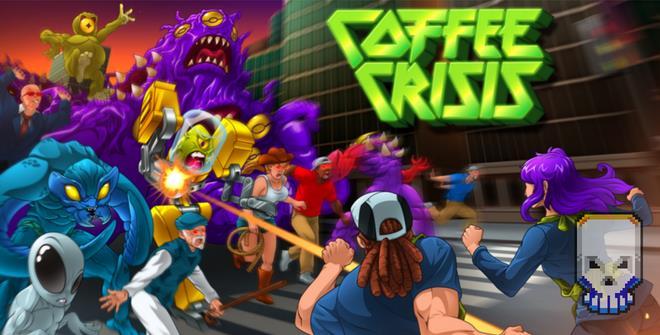 Full release review of this neo-rogue beat ‘em up!

Coffee Crisis is a neo-rogue co-op brawler of two baristas, Nick and Ashley, who have come to a realization: aliens are stealing away all of the good musicians on Earth. They take it upon themselves to defend the good music left on this planet.

Coffee Crisis greets players with a colorful palette and great character design displayed on the title menu.  The menus are easily navigable, while heavy metal riffs pump you up for the action to come.

After a brief introduction of the storyline, the player is thrust into violence when General Duke puts hands on our heros. The visual style is consistent with mid 90’s consoles; makes sense considering it was originally released for the Sega Mega Drive / Genesis in 2017. (The same console released in 1989.)

Mods (short for Modifiers) switch the gameplay up on the fly. Depending on the situation and timing, this presents itself as a good thing or bad thing.

Enemies are often at the advantage during these times, requiring players to develop a strategy and understand the rhythm of counter-attacking, while dealing with visual disturbances, extra attacks, or buffs / bonuses.

Passwords are presented at each game over and after moving onto a new level, there are no saves. I haven’t played a game that did that since Game Boy Color in 2000. Each run provides 3 continues before the game over. 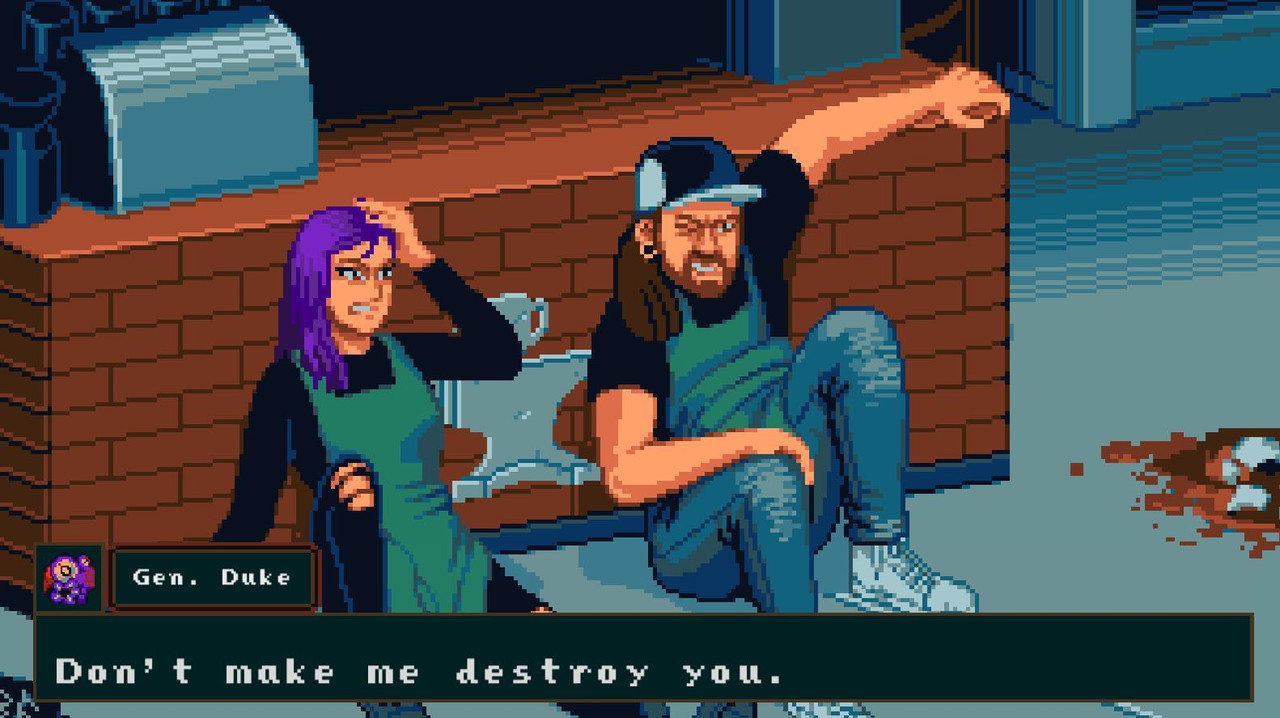 *General Duke, the first boss of the game, makes his presence known before you even begin!

Coffee Crisis is a neo-roguelike with a fast-paced style, with lots of swarms and mobs. The difficulty doesn’t change the number of enemies required to fight, but the damage of their attacks are reduced.

Enemies have different timings and patterns to watch out for. Combos are possible with proper use of the jump button, I found that attacks were possible both the upward and downward movements of the jump’s arc.

“Come back for more in Death Metal Mode,

where the difficulty is cranked to 11!”

Coffee Crisis features a call back to Mortal Kombat’s ‘Test Your Might’ sequence with a twist: keep your level within a gap to consume the optimal amount of caffeine required for an increase in HP! 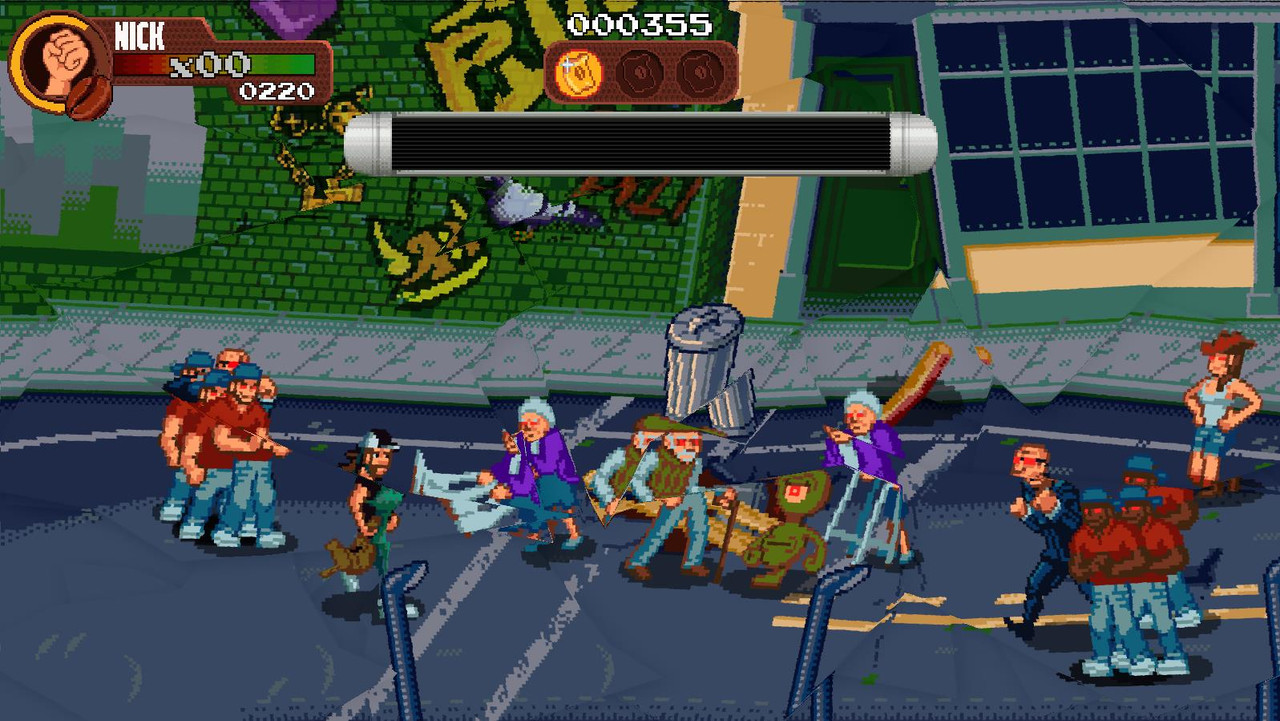 *The first level introduces Mods: some help, some do not. The screen crack effect: definitely not.

Coffee Crisis, from the very first menu, graces your ears with it’s Heavy Metal soundtrack, and it goes HEAVY — breakdowns and all.

As a contrast: the Pause menu features Muzak (for a proper coffee break [pun intended]).

Sound design is crisp and accurate, including environment effects like weather. One of the mods dampened “hearing” (sound output) and played an old-timey tune to jitterbug to on (what sounded like) a phonograph. The sound effects of brawling combine with ripping riffs in a uniquely satisfying experience.

If you’re not a fan of kick-ass metal: there are volume controls in the options menu, too.

Chances are you won’t want to… 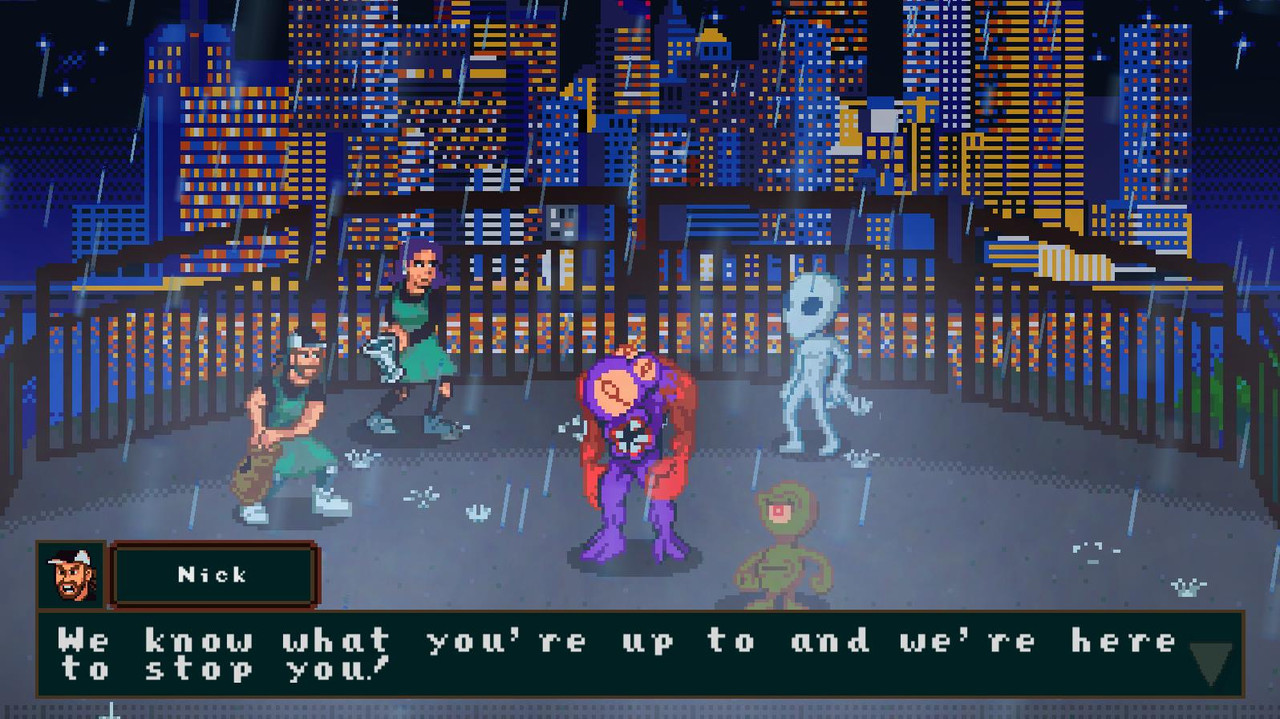 *Nick and Ashley, the only two baristas on Earth, METAL enough to demolish extraterrestrial threats.

I made it past the first level on Death mode and was promptly stomped out by a half-dozen Grey aliens, Men in Black, other unidentified entities, AND angry old people. It is unforgiving, how retro games are supposed to be.

Twitch / Mixer integration is an interesting feature (for streamers) that allows your audience to vote for the mods that are going to enter your game next. Giving a new level of interactivity and a modern spin on classic mechanics, while providing a unique challenge that can change with each playthrough.

Visual modifiers include: a ‘broken’ screen, CRT Green / Black & White overlays, negatives, pointillism, and much more. These effects stack onto one another to increase difficulty in certain spots.

A ticker across the screen provides a read-out of information on modifiers. Although good luck trying to take your eyes off the action to read them, it moves by at near a blur when attempting to preserve health.

During the time of heavy modifiers, it can be a challenge distinguishing the playable character from certain enemies, leaving no choice but to button-mash and pray to the Metal and Caffeine gods. 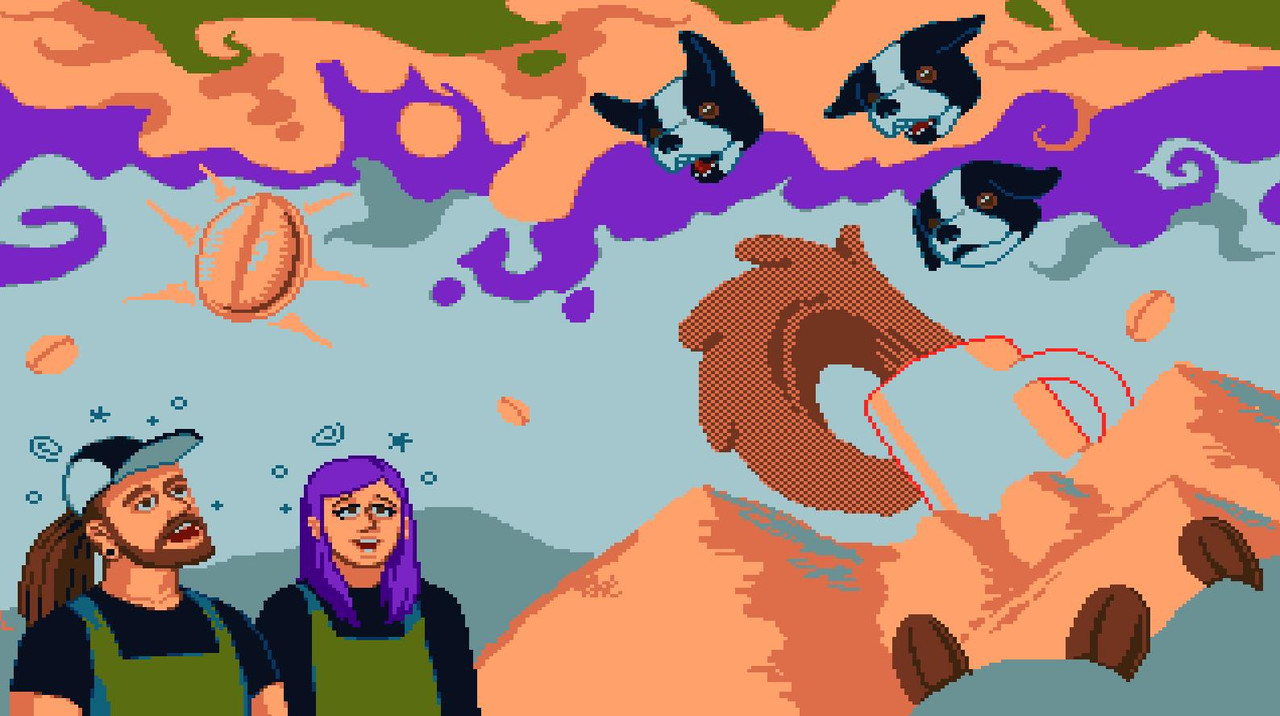 *After about the 6th level, our heroes become… a little delirious; after all that caffeine.

Coffee Crisis supports both Controllers and Keyboard inputs. Featuring a profile view of the action: like Double Dragon, Teenage Mutant Ninja Turtles, or newer titles like I Am The Hero.

The game blends mods, controls, and mobs better than expected. Once your timing is down, you’ll be pulling combos and single-handedly wiping out crowds. Heavy action keeps you on edge, leverage the lateral movement speed changes to circle around danger zones. 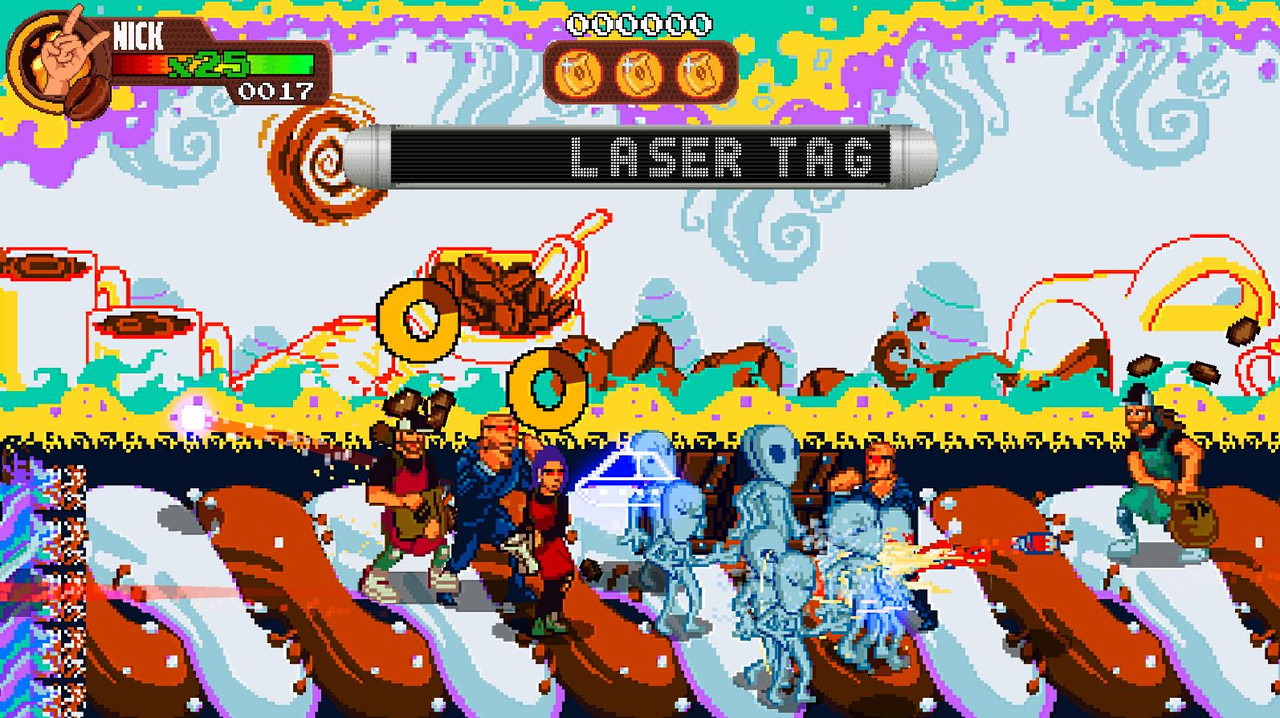 The fulfilling storyline, unlockable achievements, and cheat codes lend to the replayability tremendously. Funny moments including meme references and breaking of the 4th wall provides some surprises that are thoroughly enjoyed.

Coffee Crisis is meant to be enjoyed with another person, as the difficulty proved too much of a challenge on Normal for solo runs. Set to Easy, I completed the campaign in about 80 minutes or so.

Released in early May at a $5.99 price point on Steam, there isn’t a good reason to miss this game.

You won’t be disappointed, this retro gamer sure wasn’t.