Died of Dysentery: 10 Important Lessons Learned on the Oregon Trail 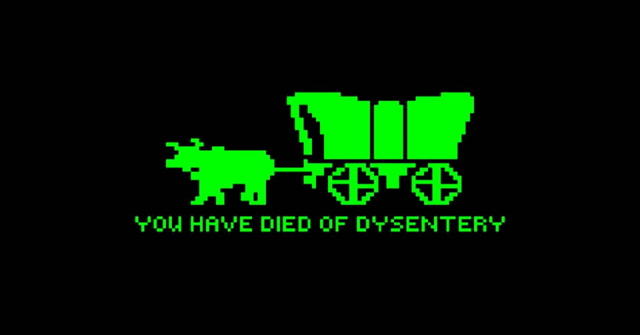 A sub-generation of gamers came into the world as Generation X began to fade and before the Millennials took center stage. In the transformative years between the mid-to-late 1970s and the early 80s, Xennial kids discovered the nation not with tablets and smartphones, but on monochrome monitors with the lingering threat of virtual dysentery.

The Oregon Trail! I bet you didn’t realize that you were learning life lessons when you went to school libraries and spent countless hours playing one of the toughest sims ever created. Here’s 10 hard-earned truths I picked up along the way, and a sentimental bonus for those who make it to the proverbial promised land (the Willamette Valley!).

The first time you set out on the trail you probably bought a ton of bullets and food before leaving town, only to discover that a pair of oxen and a wagon full of supplies makes for a very slow trip. Until the axles break, then you’re dead in the water for who knows how long. Well, not always in the water. Sometimes dead in the field, or on the road, or even at the local fort where they don’t need bullets or have any extra spare parts.

The first thing the game teaches players is that it’s OK to fail. Seriously. Armed with this well-earned information, begin anew and swap some of that arsenal and all the beef jerky for some key essentials. Now go out and fail again! The more you try, the more you learn. This title was “Nintendo hard” when Nintendo was still heavily focused on playing cards and before Grand Theft Auto’s success taught players that death doesn’t matter (or at least that hospitals charge very little for resurrection).

Pack on the yokes of oxen. Again, seriously. If you’ve got the funds, a full 9 yokes (18 oxen and a dozen roses) can get you from the starting point to the finish line. Kids who grew up with the Oregon Trail likely also played Crosscountry USA and learned to live on the road. They also got old country music stuck in their heads from time to time.

More horsepower, bigger engines … the more you put into something the faster you’ll get it done and with fewer headaches. Seriously, make it bigger, faster and as mean as 18 oxen and you’ve got a real hit with the Oregon Trail generation. Just don’t take any fewer than half a dozen of the beasts along, or you’re in for a bad time.

Extra clothes, why? Are little SALLY and FART going to get sick without them? (They should never have let 7-year-old kids name the poor adventurers.) And yes. Very sick. Cholera sick. Dysentery sick. Or a thief will steal the clothes instead of your oxen. Randomly. Let him have them.

You never know when you’re going to need extra clothes, okay? And if a thief, or an airline baggage handler, should make your suit for your job interview disappear, you’ll be glad you packed smart. You don’t learn that on the Death Road to Canada!

Pick up spares. All the spares. Shoot for at least two spare parts of anything that might break on the trail before you head out. You never know.

Admittedly, most of the people on that TV show who have a mountain of stuff in their houses may fall into this generation. But you never know when the glass shelf on your microwave might break and you’ll need the one you kept from the last unit. Or just how many planters you need for next spring. Or how you came across 12 different bottle openers and lost 3 can openers this year. They’ll turn up when you need them!

Departing in May or June gives you the best chance to win the game. Departing in July means you will die if there’s an early snow. Leaving in August? We’ll call that a learning experience. Leave early. You can always waste time; you can’t always get it back.

Whether you’re headed to the movies with friends or on the way to work, leave early. The Oregon Trail isn’t the only place you’ll run into potholes or broken axles, even if you manage to avoid the cholera on your daily commute. Leave early and enjoy the chill when you get there.

Also known as “rabbits are worthless.” Don’t shoot at rabbits. They are tiny. Their meat is tiny. Little FART can’t cut his teeth on rabbit. Twenty or so rabbits equal a deer. Deer are slower, bigger, and two fills you up for one hunting trip. Two deer equal a bear or buffalo. Even slower, even bigger. All things die with one bullet. Don’t shoot at rabbits.

A wise man once advised us not to sweat small things, but the Oregon Trail taught us that rabbits are wily critters who will tie your gun in a knot and make you shoot yourself. Or maybe that was Bugs Bunny. Still, don’t waste time and energy chasing the little, quick things that don’t pay off. Especially if the proverbial bears go down at the same cost. Shoot bears, not bunnies.

Even the earliest version of the game lets you test the water before you go trying to float your wagon across it. High water bad. Low water good. Taking the ferry is always the safe bet.

The cliche says, “Look before you leap.” The Oregon Trail version is something more like, “Check the water level before BUTT drowns alongside two oxen, six spare parts and 69 bullets.” And, if the water’s too high, hire a professional. Sure, you might float it. Or you might end up with a one-way ticket back to Missouri to become a banker.

In one of the original game’s key challenges, you decide if you want to trade some of those extra clothes for the secret to safely navigating the Snake River. When the natives ask if you want to know how to survive a river that flows less straight than a Slinky untangled and twisted up again 12 times, you say, “Yes!”

I’ve seen the Snake River. You say yes. Trust those who have gone before. For a lot of people, it’s hard to avoid the “us vs. them” arguments. Oregon Trail kids know that every trip down the trail has its own experiences. Trust the people who have lived through those experiences. Learn from their mistakes to avoid having to make some of your own. Or drowning in the Snake River.

FART broke a leg. SALLY has dysentery. A thief stole seven oxen. A snake bit BUTT. You just traded your spare parts for extra bullets and then broke two axles. And you still haven’t reached the first river crossing. That’s the Oregon Trail!

Long before Bioware was receiving accolades for intricate plots with unexpected twists and some of the best gaming website designs, the Oregon Trail was blazing the … way by training us to expect the unexpected. Nothing ever goes perfectly as planned. No wagon trip from Missouri to Oregon was ever uneventful. Make the most of it and move on. You knew these things would happen, just not when.

When All Else Fails, Be a Banker

When the misadventures of FART, SALLY, BUTT and the rest of the clan finally reach keyboard-smashing levels, you start over. You decide to take the easy road. You know it will cost you half or more of your score; the game told you so. But now you’re a banker. You’ve got 18 oxen, that dozen roses, 2000 pounds of food, three spares of everything, a Rambo film’s worth of bullets and two wardrobes full of clothes sure to appeal to the finest of highwaymen and the wisest of native guides. Because when all else fails, you can be a banker.

Playing at a disadvantage is hard. You learn more and get more points because you struggle more. When it gets to be too much, take what you’ve learned and apply it to a new game. Go ahead and start as a banker. Reinvent yourself. Then pack up your BUTT and the rest of the clan and get to Oregon. That Willamette Valley isn’t going to settle itself and you’re getting tired of writing “SALLY died here. Thanks to BUTT and FART” on tombstones. Don’t be afraid to fail, and don’t be afraid to start fresh.

Gamification and the advantages of online learning are all but taken for granted by the generation that grew up with the internet available at all times. The Oregon Trail taught players much the same lesson.

We named our settlers and grew to know and love them over countless hours of SALLY’s dysentery and BUTT’s broken legs (all seven of them). We even stopped making FART jokes after a while. The game taught us to care, to learn from mistakes and to grow as players. I warned you about the sentimental part, but isn’t that what life’s all about? Well, that and gaming.