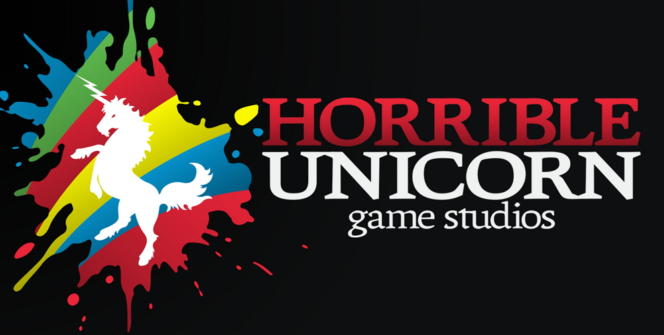 This week I was lucky enough to have a chat with the indie game development team Horrible Unicorn Game Studios about their new pixelated action adventure game Legacy of the Copper Skies. The team was so friendly and had some great insight to share about being an indie developer, their new game, crowdfunding, and what retro/indie games inspired them.

1) RETRONUKE: When did the Horrible Unicorn Game Studios team come together? Tell us a little bit about your studio, where you are from, and how the team formed?

Horrible Unicorn Game Studios: Starting our own studio was always the goal, or at least the eventual goal. In November 2014 my wife and I moved back to my home town in Ontario Canada to start the studio. Some friends of mine joined us shortly after this, and we began brainstorming company names while we worked on what would eventually be Legacy of the Copper Skies. HUGS as a name actually started out as a threat. Most of the ideas we came up with for company names were taken, or too generic, so I was like “if we don’t come up with something better I’m gonna name us HUGS”. Clearly we never came up with anything better, and we’re proud Horrible Unicorns now. Joe our pixel artist, and Eric our lead programmer joined us shortly after this, which pretty much rounded out our core team.

2) RETRONUKE: Legacy of the Copper Skies looks beyond awesome! Can you tell us a little bit about the gameplay and its story?

Horrible Unicorn Game Studios: Legacy of the Copper Skies is classic action adventure game. In the same vain as A Link to the Past if you could play Link and Zelda at the same time. Our two main characters Tir, and Isen need to work together in order to solve the puzzles, explore, defeat the bad guys, and save their worlds from destruction. To do this players will need to swap between these two characters on the fly, and sort of play them both at the same time with our rewind time mechanic.

As for story, this is something we wanted to improve on over other action adventure games. We don’t want silent protagonists, and princesses in need of rescue. We want our characters to have a voice, personality, and be fully formed characters. For a more detailed information on both story and gameplay the best place to check that out is probably our Square Enix page located here: http://collective.square-enix.com/projects/136/legacy-of-the-copper-skies

3) RETRONUKE: The characters and level designs of LOTCS are reminiscent of 16 bit era SEGA Genesis & Super Nintendo titles. Why did you choose this particular era and style for your game?

Horrible Unicorn Game Studios: Mostly it’s just something we love, and wanted to work in. We all grew up on SNES and I’m pretty sure many of our top 10 favourite games are on one of those systems. It also fits perfectly with what we wanted to do with Legacy of the Copper Skies.

4) RETRONUKE: A games music is such an important part of the gaming experience. What retro game music was the inspiration for the music you’ve created for LOTCS?

Horrible Unicorn Game Studios: We’re pulling from a few sources for inspiration. We’re all pretty big Nobou fans, like most people with ears. So I’m sure that has some influence on what we create. Our composer Jules Conroy also pulls inspiration from more modern stuff too, bands like Anamanaguchi. Our goal was to have this kind of rock/metal vs chiptunes hybrid. Kind of old meets new. 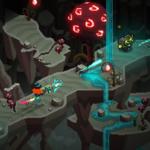 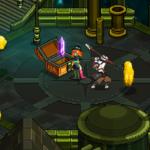 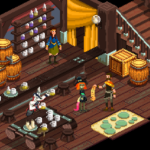 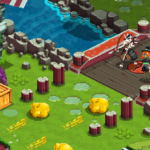 5) RETRONUKE: Can players hope to find any Easter eggs for exploring larger areas of each level?

6) RETRONUKE: What can you tell us about our main characters – Tir and Isen?

Horrible Unicorn Game Studios: First there’s Isen, the sole sentient robot of Grimstad. Curiosity and logic are her virtues, and she has a strong inner desire to create and tinker. To her, the world is a giant collection of spare parts, and it is her job to transform them and create order. Every inch of Grimstad and all its well-oiled robotic inhabitants were created by Isen from scratch. Sadly, that work is quickly coming to a close and she’s finding that there is less and less for her to do. She’s constantly searching for more… something new, something different – something that excites her again.

Then we have Tir, a hunter of great strength and primal instinct. Tir craves the peacefulness of solitude in his remote forest home, but does venture out from time to time. During these outings he spends his time defending his people from the shadows of the strange monsters that are often born into his chaotic world. He works tirelessly to ensure that his world maintains a balance between the natural areas and those that his people have claimed. Unfortunately for Tir, he is feared by his people. To them he is just another powerful beast no different than the other monsters. They’ve seen his temper and his power, and they fear it. Tir doesn’t mind so much though, as this means that they’ll leave him alone.

In each case, they are the warden of their world, the keystone that keeps everything running smoothly.

7) RETRONUKE: Judging by your Square Enix collective page, It looks like the response has been overwhelmingly positive for Legacy of the Copper Skies. What is your next step after this campaign ends?

Horrible Unicorn Game Studios: Yeah we’re pretty happy with how it all went. As for next steps, we’re going through that process now so I can’t say too much. If Square-Enix likes what they see they may back us for our Kickstarter. Co-marketing from someone like Square-Enix would be huge for us. Being noticed against a sea of competitors is one of the hardest things to do for new studios. 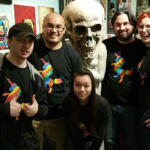 8) RETRONUKE: If you are going to run a crowdfunding campaign – once that is completed, is there a Kickstarter or Indiegogo in mind? How long after that is completed do you expect the game to be finished?

Horrible Unicorn Game Studios: We’re definitely planning on going the Kickstarter route. Seems to be one of the best options for indie games. As for how long it would be post campaign for us to release; that is yet to be determined. Odds are it will be about a year, but it depends on how well we do, stretch goals, etc.

9) RETRONUKE: Which retro games inspired you to become indie game developers, and what is the most rewarding aspect of being an indie dev?

Horrible Unicorn Game Studios: I can’t speak for everyone, but the retro games that made me want to get into games are Final Fantasy 6, GoldenEye, and even Heart of Africa on Commodore 64. All very different games, but they all meant a lot to me for different reasons. As for more modern indie games, games like Fez, and Bastion definitely inspire me. Those games are wicked, unique, and polished.

As for the most rewarding part, that’s pretty easy. It’s that you get to work on stuff you love and actually want to make on a daily basis. Work doesn’t even feel like work for me now. In AAA you have little control over what you work on. As an indie now we can do what we want for better or worse. Which is terrifying, and freeing at the same time.

10) RETRONUKE: What indie games are you playing now? and which are you excited for this year?

Horrible Unicorn Game Studios: Haha, this question should be: What games are you attempting to play now? I have a rather large pile of shame at the moment. I keep trying to finish Shovel Knight, Transistor, and a few other Indies on PS4. On top of that I really want to finish Farcry 4, Witcher 3, and a few others. Unfortunately work takes up most of my time so playing games is more difficult than it used to be.

The game I am most looking forward too is probably Camelot Unchained. I loved me some Dark Age of Camelot back in the day. I’ve found no other experience as exhilarating as RvR was in that game for me. I just hope they have a Minstrel type class in Camelot Unchained so I can get my stealth melee flute on again. That and No Mans Sky. Omg No Mans Sky. I can’t wait.

For more game developer interviews read our PixelJam Studios Interview with Miles Tilmann and our interview with Imagos Softworks about their latest Kickstarter project Starr Mazer!