Hyper light drifter is a delightful yet punishing action RPG developed by Heart Machine which debuted back in 2016. Since its release, fans have not been able to get enough of the games incredibly beautiful pixel art design and high action “The Legend of Zelda on crack” style of gameplay. If you’re playing through Hyper Light Drifter right now and find yourself having a tough time with some of the bosses, don’t worry, we’re here to help. This walkthrough is solely focused on beating the toughest baddies in the game so you can continue to make progress and experience the greatness that is Hyper Light Drifter. Without further ado, here’s our boss guide and the best strategies for beating all the bosses in Hyper Light Drifter.

How to beat The Archer

The Archer is one of the easier bosses in the game as his attack patterns are pretty predictable. One of the main exploits that this boss has is when he is using his Volley of Mines attack. During this attack, the Archer will point his bow skyward and begin firing. During this time he is completely stationary, allowing you get in some serious attacks. Another great strategy for defeating the Archer is by dashing around the screen and trying to stay in lock step with his movements. Doing so will allow you to continuously attack him and avoid his triple shot ability. The third and probably most effective way to kill the Archer is by allowing him to fill the screen with mines. If you are skilled enough to avoid them using your dash ability, then you can be rewarded with a series of explosion chains which will cause the Archer to take a TON of damage. Though this is also the most risky of the methods, using his own weapons against him is best and does a lot of damage in a really short period of time if executed properly.

How to beat The Emperor (Toad King)

One of the main attacks The Emperor (Toad King) will launch at you is the Flame Jars. Avoiding these bombs early on with your dash ability is key to saving health during the battle. This also opens up a great opportunity to do some early damage to him. During the Emperors jumping attack it is best to dash away and slash at him from a side angle. Once he hits the ground and is stunned for a few seconds, get a few repeated slashes in or use one of your special abilities to maximize damage. The main exploit with this boss however is to stun lock him by using his flame jars against him. Working to get in 1-2 attacks, dodging, and rinsing and repeat that same strategy until the Emperor is defeated. You fight the Emperor early on and is one of the easier bosses in the game.

How to beat The Hierophant

Defeating this boss tends to be a little of a slow burn. It is important to understand that taking your time on The Hierophant is the main strategy for success. Evading his vortex attacks and using the shotgun at close range can be very effective (up to 5 damage). The best way to defeat him is to continuously take one or two close range attacks, while preparing to avoid his vortex, then rinsing and repeating. If possible, getting some rounds off from long range can be helpful in taking his health down a little bit from afar. Keeping an eye on your enemy, instead of the Drifter is important here. His vortex attacks are quick and randomized, so it’s hard to know what’s coming next without keeping a close eye on him. Doing so is crucial and helps to keep the damage flowing while his vortex continues to pummel you.

How to beat The Summoner

This guys annoying. Mainly because he continues to run away from you the entire battle and uses his nodes to attack for him. You are going to want to attack him differently during the different phases of his attacks. Once he deploys his nodes, its best to try and kill the majority of them quickly because they will make you life a living hell if you don’t. They are aggressive and are pretty much on you the entire battle. Use your dash ability to move towards them quickly then use the charged sword slash attack till you made quick work of them. Using the Roly Poly on these guys can be really fast and effective as well. Other than that, the Summoner get stun locked pretty frequently and can be dealt some serious damage while in this state. Wait for these moments and try to maximize the damage you put on him. Avoiding damage is tough with this boss, but is really important in defeating him.

How to beat The Hanged Man

The Hanged Man can be a challenging boss simply because of the variety of attacks he can throw at you. I recommend leading him towards one of the Crystal Knights early on in the fight. Doing this will cause him to kill his own resources and prevent him from using them later on. Evading his double and triple sword attacks with your dash ability is important. Once those end, quickly parry for 2 attacks, and dash away to avoid damage. Avoiding his crystal shockwave is easy, just keep your distance and allow his attack to finish. After that, get in close for 3-4 strikes on him. More than likely he will try and use Zaliksa against you. Just keep your distance and use your Sword Deflection ability to send the damage back his way. Repeat these steps until the Hanged Man is defeated.

How to beat The Reaper

The best strategy for defeating The Reaper is to keep your distance. While his scythe attack has triggered, he will be vulnerable. Use long range weapons to get some quick damage on him during these resting periods. Once the scythe is returned to him is the best time to perform 1-2 sword strikes or 1 charge sword attack (4-5 damage). Continue to dash and move away from his scythe attacks and find your openings. Gradually bring his health down by repeating this process and you’ll find yourself with 3 gearbits as your reward.

How to beat The Sorcerer

Dodging is extremely important in this battle early on. Make sure to use the sword deflection ability to send his Fire Orbs back at him. This will help to keep his health moving down as you are dodging. If both orbs hit you, you could be looking at a really quick defeat depending on how much health you have going into this fight. Using the shotgun at close range can be a great way to take down some of the Sorcerers health before he separates the floor tiles. Keep deflecting his fire orbs back at him after the tiles have been removed and evade his other attacks for the win. 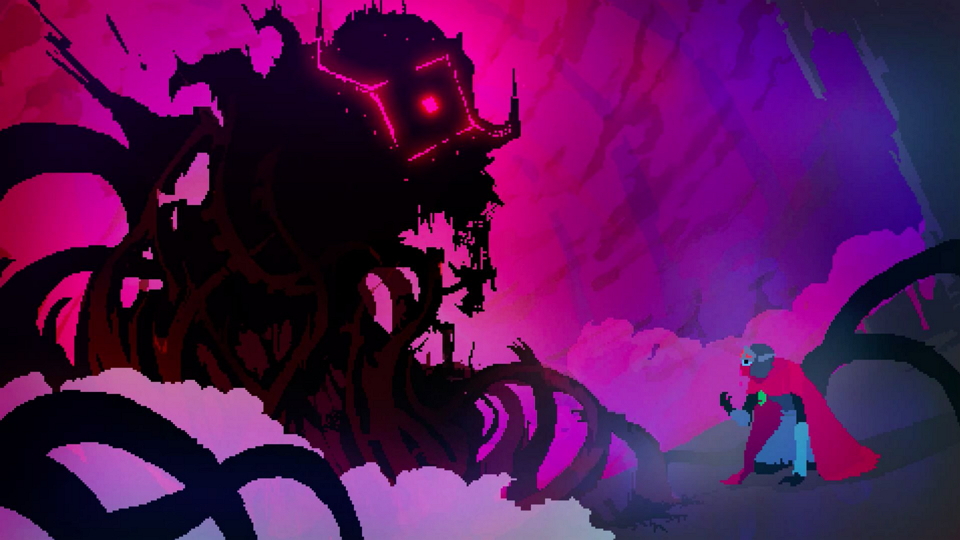 How to beat Judgement

Since this is clearly the most difficult boss of the game, having all of the necessary abilities unlocked will be super valuable in your success. Judgements attacks are relentless and making sure to continually dodge his patterns is crucial in avoiding damage. Since any and all attacks that come your way can almost instantly kill you, making sure to dodge frequently and get up close when possible for some quick strikes. He tends to float around a bit leaving himself open for a few attacks, but when he is moving, get the hell out of the way. Getting behind him after he performs his bullet barrage attack will allow for some quick damage and making sure that you are behind him for his Hyper laser attack will prevent you taking a ton of unnecessary damage. After he performs his light explosion attack he will be vulnerable for a few easy shots, then go right back into his charge attack. Be sure to avoid this be getting out of the way but not placing yourself to far away to get in some sword strikes. Mid way through the battle, make sure to heal with a med-kit just to put yourself at full health. Continue to avoid the charge, bullet barrage and hyper laser attacks and take this bitch down!

There you have it, you’ve defeated Judgement and lived to brag to your friends about how badass you are. Enjoy the ending to the game!

If you’re looking for more HLD then check out our post for the Top 5 Ways to Survive in Hyper Light Drifter.