I have been playing Hyper Light Drifter non-stop now for the last 4 hours. I have been beaten down and bloodied so many times that I’ve lost count. As masochistic as it sounds, I simply can’t get enough of it. Heart-Machine’s Kickstarter crowd funded indie action RPG has finally been unleashed and god damn is it great. If you’ve ever been a fan of games like Zelda: A Link to the Past, Beyond Oasis, the Y’s series, or even the mobile game Zenonia, then Hyper Light Drifter will feel right at home for you. If you aren’t a fan of that style of game, then I have no idea why you’re even reading this article. In any case, Hyper Light Drifter accomplishes much of what the team originally set out to do, which was to create a modern, visually and sonically impressive action RPG that truly captures the feel of the retro games we all grew up playing. As a backer of the games Kickstarter in 2013, I was immediately impressed with the games pixel art heavy and stylized art style. The developers claim to deliver Dark Souls level difficulty was also a big draw for me. However, it seems that for some it has been one of the games drawbacks. For those who feel beaten down by the games difficulty level, here are 5 ways to survive in Hyper Light Drifter.

After my first few hours playing Hyper Light Drifter it was pretty evident that your enemies don’t mess around. The AI can be really aggressive causing multiple enemies to come at you simultaneously. Often times dealing with a large group of enemies can be the end of you quickly without the proper strategy. When in situations like this, a few missed sword strikes could be devastating, causing you to have to replay from your last auto save. One way to deal with this predicament is to learn your enemies attack patterns. You do this by allowing your enemies to attack you and quickly dodging. After analyzing how much distance is between you and the completion of their attack, you can then move in for the kill. Also be sure not to not just mash the attack button once you find your opening. The Drifter only has a 3 attack combo he can pull off, so make sure that as soon as you’re finished, you quickly move away from your enemies. Precision is everything.

Dashing is a common mechanic is most action RPG’s. It’s great for both its defensive application and the ability to move around the environment a bit faster. In Hyper Light Drifter you will be using your dash ability A LOT. Enemies will often times do a quick charge before unleashing a powerful and fast attack that can stop you in your tracks if you miss a beat. Using your dash ability frequently when surrounded by various enemy types is crucial to your survival and the ability to progress through the game. You must master the use of the dash or you will feel like you are getting crushed. Sometimes, mentally slowing things down and really thinking about your moves and strategies can be the secret to mastering a games controls. I know that when I was first getting into Hotline Miami, as soon as I realized that waiting for your moment was a part of the game, I blew through it. Do yourself a favor and use the dash. The Dash ability is your friend here.

Heart Machines glorious attention to environmental detail is awe inspiring and sometimes just requires minutes to stop and admire the beauty of it all. It turns out that many pieces of your environment like crystal shards, boxes, barrels, and other random things can be destroyed by the Drifter. Since battles will often leave you taking at least a hit or two before moving to the next area, you are going to want to explore your ass off in search of medical kits or weapon upgrades. Sometimes slashing through a big pile of crystal shards can reveal a path you didn’t see off screen, one that might lead to a much needed health pack or even to a new area entirely. 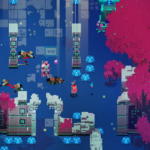 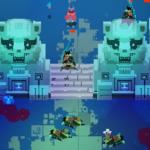 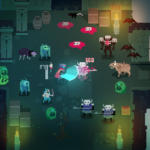 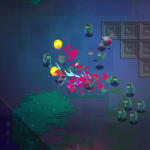 In Hyper Light Drifter you are given a pistol as one of your primary weapon early on. At first, I found it a bit tough to get a grasp on since most of the enemies early in the game can be disposed of with your sword. This definitely changes as you get further into the game and are forced to deal with much larger groups of enemies. In these situations you must leverage the ranged power of your pistol to help take the health down on unique enemies. Having multiple enemies dash-attacking you simultaneously is a recipe for a quick death. Try and use your pistol against big crowds of enemies to try and get some extra damage done before entering into close quarters combat. If there is an explosive barrel located near a group of baddies, make sure you’re taking advantage of that opportunity and blasting the hell out of it. The reward could have you making it through a deadly area unscathed.

One thing you will have to become comfortable with in Hyper Light Drifter is death. You will die millions of times, so it’s best to just get over it now. Though it can be annoying to have to start from your last auto save, dying does have its benefits. Instead of getting frustrated and thinking of death as a roadblock to success, think of it as a way of learning from your mistakes. Since you will be making a ton of them before you have mastered Hyper Light Drifter, learn from every death you have and try to find new strategies that will work when you’re faced with different enemy configurations, and enemy types. Understanding why you are getting killed by certain enemies is half the battle. Often times I have found that my play style might have been too aggressive when facing certain type of enemies that call for a more strategic approach.

If you take time to think about your attacks, use your dash and ranged weapon, explore, and use your environment to your advantage, you will have a much greater chance of surviving in Hyper Light Drifters harsh yet colorful world. If you get a chance i highly recommend picking up Hyper Light Drifter, which is on sale for 10% off on STEAM right now.