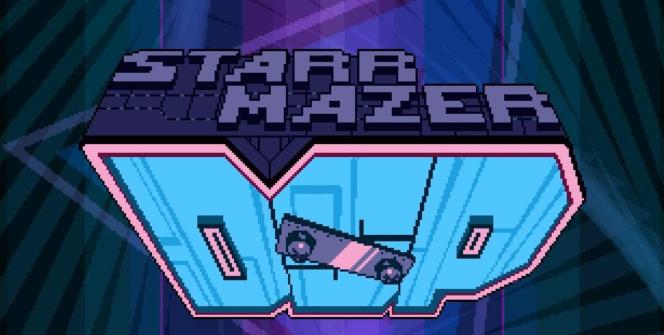 It is a sad fact that most arcades in recent years have gone extinct, they are few and far between when compared to their peak in the 80’s and early 90’s. No longer are they being swamped with quarters over whose initials were on the scoreboards this week for Donkey Kong or Ms. PacMan. Other popular titles were of the side-scrolling, quick-flying, shooter action genres like Gradius and Lords of Thunder; known for their extreme speeds and difficult enemy formations that kept your fingers working. Although the golden age of arcades has come to a close, gamers around the world can rejoice in new tities that live up to this penultimate nostalgia of arcade glory.

Starr Mazer: DSP, a game developed by Imagos Softworks and Pixeljam, is a pixel-pretty horizontal scrolling shooter with an arcade sensibility and a focus on satisfying progression. This game serves as a prequel to the popular Starr Mazer and was just released on Steam Early Access. It sounds like a mouthful but it’s honestly the best way to describe the experience you’ll have while playing this game.

Players take control of a squadron of DSP pilots with different ships, weapon loadouts, and personalities. Your mission is to battle through nine frantic levels, 3 powerful bosses, and take down the G’ell Super Ship in a single run. The gameplay sets itself apart from other games as each new ship you use has a unique pilot with only one life to complete their mission. Through unlocking of more experienced squads and better ships, you can end the invasion of Thersa-CPIX.

*Choose your squad, be sure you can pay them.

The gameplay brings me right back to the arcades as a child. The fast and fluid-like motions of the enemies takes an quick eye and faster reflexes to manage as the levels progressively become more difficult. Full and detailed backgrounds give a rich view of the home world and environments that are encountered throughout the game. This experience will leave you wanting to find that old joystick buried in your closet, just to stand a chance.

*The opening moments of the game, immersing you in the debris from destruction of a once beautiful city.

You begin with an inventory of pilots – each with their own abilities and power ups. There are 3 tiers of pilots to choose from, with their own price for hire. Once you’ve selected your squad, it’s time to take on the invading forces. Each pilot only has one chance to fly, creating a real sense of urgency and danger when you begin to dodge enemy attacks.

If arcades were still around, this game would demand a cabinet front and center. It’s hard to stop after just a few attempts, DSP does a fantastic job of enticing the player to try one more time with it’s never-ending rosters of new pilot volunteers to choose from. New recruits are added through the use of SK:ORE, the in-game currency dropped from enemy ships and Carbomite pickups, each getting their chance to stop their at-home assault.

Right from the start, it’s very apparent where the developers sourced their inspiration for this game. Its beautiful and vibrant pixel art color designs leave you in awe as you flow across the screen, the game easily achieving 60fps. The “nostalgia in HD” concept is really taken to it’s maximum here and there are no disappointments. Starr Mazer: DSP has been graced with gameplay that easily makes it one of my favorite indie games played so far for RETRONUKE.

“It’s great to look at and even more fun to play. Plain and simple.”

Starr Mazer DSP features one of the most precise airplane controls for a side-scrolling game, enabling easier dodges and more accurate firing. Though you may not notice as the enemies become more difficult to deal with as the game goes on.

There are tough patterns to crack for projectiles keeps you on your toes, especially because each ship and pilot have different abilities and weapons. It uses a simple button control scheme that is perfect for the typical two button arcade game layouts.

*The fight eventually leaves Thersa-CPIX for the skies and stars above.

DSP features a poppy soundtrack that includes full synth, and is easily reminiscent of titles like Mega Man or even Terraria. These very full compositions offer direction and an impending urge to complete each level.

All of these influences create an auditory experience comparable only to its visuals. This game is as easy to listen to as it is to watch.

Starr Mazer: DSP is an absolute blast, definitely a game that is going to stay in my current rotation, at least until finally beaten. By creating a new experience from what gamers have come to know and love, this game satisfies the fast-flying shooters from years past. It’s a game that’s worth your time and will be hard to put down. Check it out on Steam Early Access now!