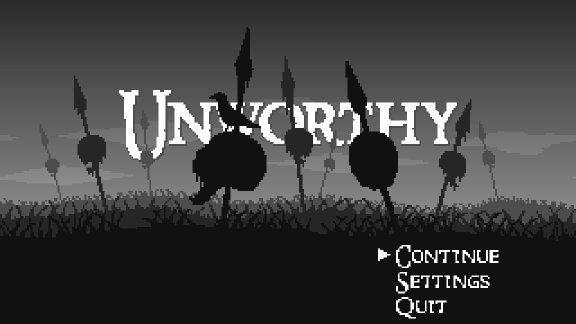 Unworthy is a combat-focused metroidvania game which presents difficulty and challenges similar to titles such as Super Ghouls ‘n Ghosts and Dark Souls. This striking game presents an experience that is for the hardcore crowd, but wrapped in such design that it is approachable to anyone. Currently in it’s pre-alpha stage of development, there are sure to be more changes and tweaks to come in the future; keep this game in mind for it’s highly challenging, yet addictive, gameplay.

*The opening moments of the game, in a foggy graveyard overlooked by a large castle and full moon.

Immediately entering the game, you are met with some extremely easy-to-learn controls (which are remappable). One stark difference from this game compared to others is that “jump” is completely removed. You are expected to complete this game without jumping over combatants77 or obstacles, forcing you to face your opponents head on. This quickly results in the gamer having to think quickly on their feet when it comes to new enemies with different attacks and weapons.  The graphics are multi-layered black and gray with a parallax background that gives you a real sense of environment and urgency.

*A small snippet of gameplay and over menu.

It should be noted that you will die, a LOT. Expect to hear about just “unworthy” you are to die in this game. The only other color you will see in this game is red, from the blood that will spill. Unworthy uses very stark contrasts for emphasis on damage and death; capturing to tone of torment and anguish through it’s design, capitalized by Death himself taking your life once you finally succumb to your injuries.

Unworthy definitely has great controls, they are easy to learn and are completely remappable. Although you are without jump, you do have a roll which doubles as an evasion from enemy attacks. Your typical 3 hit combo is the main method for attack, with a stamina bar which will limit the amount of combos you can do in a chain. Your character is very human and will need small breaks to catch their breath before attacking again. As mentioned previously the absence of a jump requires precise attacks and dodges,  giving the player a real gratifying experience for each combatant you take down.

*Narcoss, a boss providing a destructive blow to our Hero. Remember to roll!

The music in Unworthy is definitely worthy of some praise. Between the creepy string ensemble, vocal choir, and orchestra, this game encapsulates the cryptic and gravely themes which will only enhance your experience as you slay your enemies. As tensions rise and more intense battles take place, the music adjusts to create a sense of urgency and hopelessness.

Unworthy is a metroidvania game which takes the difficulty of retro games you’re used to (and makes it harder)  by removing the ever-present “jump”. Armed with only your wits, you must fight your way through minions, bosses, and other obstacles. Trial and error will be your best friend in this game, as you prove your worth. This game’s pre-alpha demo is available for download now!