Gunkatana: Really shouldn’t be running with that

Home » Gunkatana: Really shouldn’t be running with that 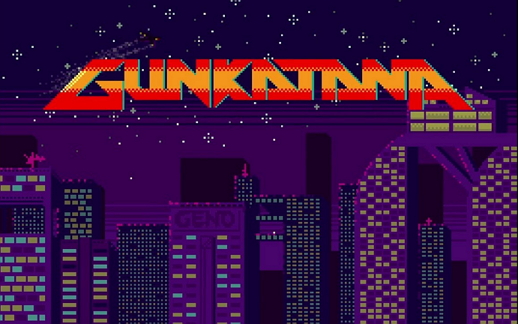 This is an early demo. This review will be based on its current state. Certain bugs and issues will hopefully be fixed. Please keep this in mind.

Welcome to a fast-paced, carnage-filled, neon battle arena known as Gunkatana. The combat is really satisfying with the classic one-shot-one-kill rule to add extra tension. You have a laser blaster that shoots ricochet bullets. The aiming isn’t the best because it always shoots the direction that you’re facing, and you can’t rotate your character without moving as well, but I almost forgot I even had the blaster after a few minutes of using the katana. There’s a spin move that slices all surrounding foes, a dash attack that can affect more than one player, and an attack only performed while riding a turbo rail. Riding on turbo rails zooms you around each of the two arenas, and you automatically slash through anyone in your path.

There are currently two game-modes: Blood Credits and Deathmatch. Deathmatch is just what you’d expect, so I spent most of my time with the Blood Credits mode. It’s not much different than deathmatch, but defeated bots and players drop a pile of credits of various shapes and colors. It’s much more satisfying than just turning enemies into bloody puddles in deathmatch mode. Both modes are accompanied by some awesome “retrowave” tunes that really add to the experience. You can play with a controller or a keyboard and mouse, but I mainly used a controller, and you can play with AI or up to three other friends/enemies. The current AI for the bots is okay, but every once in awhile they would all just give up for a good thirty seconds and sit idly while I sliced and diced them.

I’ll say it again, the combat is really satisfying. Speeding around and slashing other players is intense and relies heavily on skill and reflexes. Unfortunately, this demo leaves me wanting more. It’s worth a try if you have some friends to play it with. The aiming could be better, but shooting a gun is nowhere near as fun as swinging around your katana to the funky techno soundtrack