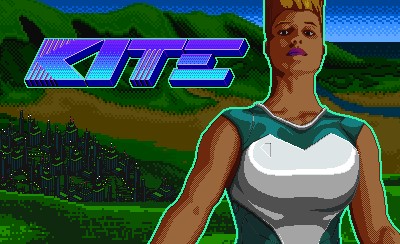 You know what I miss about the ‘80s? The big hair. The catchy pop music. The fashions. The over the top movies and video games. The colors, the fonts, the technologies slowly coming to fruition. The ‘80s aesthetic, in general, is something that I…dare I say, yearn for? And yet I know we’ll never return to those glory years, a period in time only to be remembered by misguided pop culture attempts that don’t do these radical years justice..

But when I played Kite, I was transported back to that time. Once that music booted up and those graphics flickered on my screen, I was immediately a kid again, sitting on my dad’s old computer, typing in DOS prompts to get into the game.

Kite encapsulates all that is good about the ‘80s, and I am all about this life.

Kite, currently in alpha, is being developed by Lab Cat Games. This one man team dove head-first into game development after quitting his day job to pursue his dream of making video games. After a few weeks and a lot of sweat, blood, and tears, a prototype of Kite emerged, and anyone who played it fell in love. It was then that Lab Cat Games knew that there was no turning back, and that Kite had to see the light of day.

Lab Cat said he was inspired by the video games of yesteryear, such as Zombies Ate My Neighbors, Smash TV, and The Chaos Engine. He wanted to bring back the same rush he got from these games as a child and implement them into modern gaming. Kite can be found as an Early Access offering on Steam for $9.99, but he is urging fans to visit the Kite EquityArcade campaign where he is raising money through equity-based crowdfunding. Gamers invest in Kite instead of donating to it, and for as little as $25, they can own a portion of the game and even make money from it once Kite launches.

The story is pretty in-depth. There was a great war that had recently ended, and humanity was trying to move on from the horrors that they had experienced. Nature became one with technology, and mankind was looking towards a better, brighter future. Yet on the brink of Utopia, there are still countless mobs of rebellious robots that would stand in the way of peace. Only a super soldier could dare defy the masses and bring calm to the lands once and for all.

Enter Mags, the ultimate bionic woman. She was scientifically created to kick as much metallic ass as possible, and nothing can truly stand in her way. As she blasts through Charge Bots, Slice Bots, Bouncing Betties, Crab Bots, Hyper Turrets, Prox Mines, and more, she collects fallen items that can later help her upgrade her weapons, defenses, and other systems. As she gets stronger, so too do her enemies, but she’s not afraid of a challenge and won’t back down from a fight.

The controls are standard – WASD keys move Mags, and Tab progresses the dialog. Both the right and left mouse buttons control the weapons, middle click allows you to switch set, and use the scroll button on the mouse to dual or single wield. Q and E control her abilities, and R allows you to switch buffs. Space bar will make Mags sprint, Shift induces slow-mo, and tapping a direction twice will allow for a quick boost of speed. Every single control is fluid and moves seamlessly, which is absolutely critical in a top-down, twin-stick bullet hell.

Lab Cat mentioned that he wanted to bring back the feel of games like Zombies Ate My Neighbors, and that is 100% what this game feels like, but in an ‘80s post-apocalyptic kind of vibe. First impressions on gameplay took me back to that immediately, and I was transported to a time when, even though the graphics may have seemed simpler, the gameplay was far more complex. With no real tutorial, no mini-map to tell you where to go, no easily located objectives, and the sheer onslaught of enemies, Kite brought out the very best of ‘80s games and made them relevant again in the most radical way possible.

I think the best part of my experience with Kite is showing this game to my dad, a gamer from the ‘70s and ‘80s. He took one look at the screen and went “wow, this game looks ancient!”. To me, it validated what must have been agonizing effort on the developer’s part to make this game look authentic as possible to its 16-bit predecessors.

The scenery is absolutely stunning. Each level is just eye-candy. There’s a color explosion on every screen, and your brain will wonder what kind of drug you just did to receive such incredible input. Each tree, mushroom, bullet, and enemy is just a blessing when it all comes together to make one pleasing backdrop for me to shoot the shit out of it all. Everything about it is so deliciously retro and lends legitimacy to the “ancient-looking” claim. The graphics get a solid A+ for every perfectly placed pixel.

Gameplay is just…fun. This is what fun was like back in the day. Battling endlessly through throngs of enemies, getting weapons upgrades, trying to beat that one level that has just too many baddies or too difficult a map…this is exactly what video games used to be like. If you miss the games of your childhood, you’ll appreciate all that Kite has to offer in terms of gameplay.

If anything makes this game, it’s the music. Hands down. If you like synthwave with an upbeat feel, you’re going to love Kite for its music alone. I’ve had the music playing in the background for the entire time I’ve been writing this review because it is just so damn good. If you’ve ever watched an ‘80s movie with futuristic themes, you’ve seen a montage or scene with this exact type of music. I could bathe in this soundtrack. The music alone is worth the investment, and I implore the developer to continue making more songs for the game and just in general because…my God. Amazing.

Kite is complex in its simplicity and simple in its complexity. You can easily pick up this game and play it without understanding its storyline at all – you don’t need to know the who, what, where, and why when you’re just blasting bullets away at baddies. But delve a little deeper and you can appreciate just how massive the game actually is. You can use strategies to increase your power and score. You can follow along on the incredibly detailed storyline. And you can even imagine that the future that Kite describes may not be so far off. However you decide to play Kite is irrelevant – the fact is, you should just play it. The visuals, the audio, the mechanics, the gameplay…everything about it is a 10 out of 10, and that is so rare for any game to accomplish.

So for the price of a dinner out, you can invest in Kite and ultimately earn back your initial investment (and then some) when the game explodes onto the scene (which it will because it is so freakin’ good). You can help Lab Cat Games secure the funding that they need to finish this masterpiece, and you can do it all from the comfort of your own home. Whatever you decide to do, at least keep this game and its developer on your radar, because only amazing things will come from them.