OUTBUDDIES: First Impressions from Under the Sea!

Home » OUTBUDDIES: First Impressions from Under the Sea! 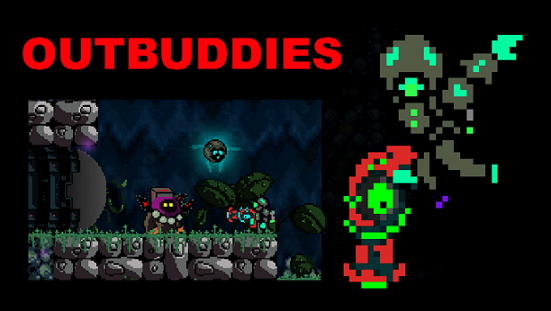 OUTBUDDIES is a non-linear exploration based platformer with RPG elements (a genre commonly referred to as “Metroidvania”). This game takes its inspiration from ancient Maya mythology as well as the writings of H.P. Lovecraft and Jules Verne. The main character is John, a young adventurer and scientist who finds himself 36,000 feet underwater after a shipwreck, attached to a sophisticated external life support system. With no further answers or explanations.

You are accompanied by a droid named Buddy, your playable partner with their own abilities. As you explore the immediate environment in search of answers, you quickly discover there is danger and mystery lurking in the dark waters. Take a plunge into uncharted territory with a game that exceeds many expectations, especially for a demo.

*Face-to-face with a rather large boss, act fast!

OUTBUDDIES presents a dual-hero character scheme that is similar to games like Donkey Kong Country, in that the player can switch between the two at will. Within ten minutes of starting this game, you are immersed in the approach needed to skillfully maneuver through treacherous undiscovered areas. OUTBUDDIES does a great job of recreating the classic Metroidvania gameplay mechanics when it comes to enemy AI behavior and interaction with the environment.

An interesting approach with OUTBUDDIES is the creative use of emoji based dialogue to express emotion or reaction from our main protagonist. This is a refreshing experience when compared to lengthy sections of interaction between both characters.

*Buddy being a pal and waking John from his premature sleep with the fishes.

An interesting fact about OUTBUDDIES is that it was completely designed and animated by one person, Julian Laufer. Clearly inspired by his child love of videogames, has created a game that lives up to the full potential of this genre for a new generation of gamers. His attention to detail will only invite your imagination into the unknown.

Running at a crisp 60 frames per second (along with options to force 30fps), OUTBUDDIES is a feast for the eyes. This is the type of game design that was only dreamt about when 16-bit was developed and popular; hand-designed sprites combined with realistic physics only increase how real this game plays.

OUTBUDDIES does not hold back when it comes to quality and the soundtrack is no exception. Finding a balance between strings, synth keys, and live horns that only serve to enhance your overall playing experience. It’s awesome AND it’s original, you can’t ask for a whole lot more than that!

*John and his droid, Buddy, interacting with another character.

OUTBUDDIES teaches the player a wide range of controls and techniques required for success within the game without being overbearing. The keyboard command combinations can be a bit mushy but this is alleviated with the substitution of a controller. Controller support is currently included within the demo for Xbox 360 or generic gamepads. Through and through, these controls exceeds all expectations of a solid platformer.

“…a game that lives up to the full potential of this genre for a new generation of gamers.”

OUTBUDDIES is one of the most complete demos I’ve played for RETRONUKE. Between the original design, gameplay elements, and overall presentation, one can only assume this game was created by someone who truly enjoys great pixel games. This passion oozes from this game in a way that can only be explained as a great time. The demo is available for download here!

If you’d like to read more, check out our reviews on Unworthy and Anthraxx, two other great pixel indie games currently in alpha development!