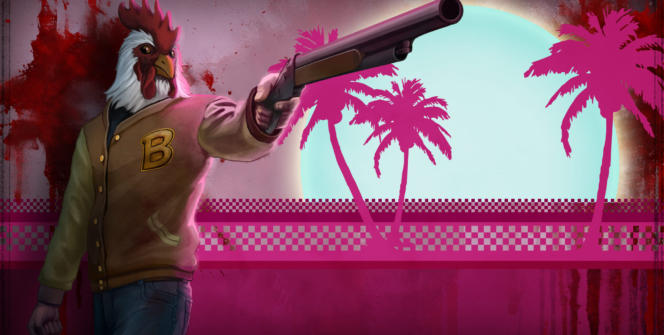 I may be a bit late on this one, but i recently picked up this great title on the recent STEAM sale and couldn’t put my controller down. This game in particular stands alone among many other newly released indie games. Not only hailed for its fast paced and addictive game play but for its thought-provoking idea behind the game. If you haven’t heard enough about it already, Hotline Miami is making waves in the indie gaming community. Created by Dennaton Games, this top down pixelated action shooter makes quite a statement about violence in video games today and with everything that has been going on in our media lately, this is an important game to think about. Take a trip through the bloodstained streets of Miami in our Hotline Miami game review below (Beware of spoilers).

It’s nostalgic graphic style, pixelated blood splatter, and trippy 80’s dance club score, create an experience unlike anything we have seen in recent years. Imagine if you could, the bastard child of Splatterhouse and Drive, with the music of John Carpenter, on a shitload of cocaine in a Miami dance club…..and that’s Hotline Miami. The look and feel are only complimented by its high-octane action and flawless game play, forcing you to eliminate every enemy on the map, using a combination of stealth and quick reactionary tactics. In all honesty, it has NEVER been this fun to be a serial killer. In my opinion it beats the shit out of GTA in the violence, challenge, and overall fun category. And when I say this game is VIOLENT, I mean it. You must tactfully use whatever means possible to dispose of your enemies, whether it’s a machete to the face, eye gauging, or even curb stomping, this game get medieval on your ass. You have a large arsenal of melee or ranged weapons to choose from and scoring better on each stage can unlock more masks or weapons. Each stage has you enter into a different building where your only mission is to kill every enemy on the screen without dying first. This sounds a lot simpler then it is. Game play can be extremely challenging, as enemy AI is quick and one hit will result in your demise, only to restart the stage dozens of times, praying for that perfect run. Though this may seem repetitive, but HLM has a way of sucking you in. Each death results in you learning something about your enemies and allows you to craft a strategy for your next run through the gauntlet. This brings me back to the old NES days of grinding through a game merely for the satisfaction of overcoming something extremely challenging. This idea couldn’t be more true then with Hotline Miami. 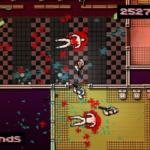 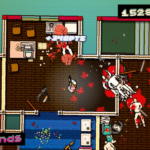 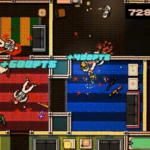 The game opens with you as a nameless character alone in your apartment confused and unaware of what to do, you hear the ringing of your telephone. A mysterious voice answers on the other end, feeding you subtle directions to your next task, which is generally inferred as a metaphor for killing everyone there. You are given different masks to choose from for each stage and each one either grants you an advantage or a handicap. Your character regularly experiences hallucinations, and you are met by three mysterious masked strangers who often question your motivations, identity, and actions. This makes for an interesting narrative, as you start to feel as though these characters are questioning YOUR motivations for blindly killing without question. As the story develops stranger things begin to happen. Your character beings to see violent imagery in his trips to different shops, you save a drug addicted prostitute, and even wind up in hospital with little knowledge of how you got there. After killing hundreds of white suited mobsters, the plot only gets more convoluted and your lead further down the proverbial rabbit hole. 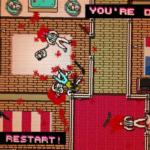 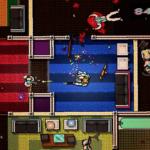 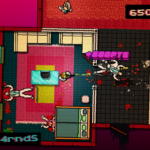 Hotline Miami might be one of the most fun games i have ever played. It has action, great graphics, and an incredible soundtrack. If the challenging stages, fun weapons, and thumping dance beats don’t keep you coming back for more, i don’t know what will. This game has so much to offer, and frankly as soon as i started playing i was addicted. But what does that say about me? Am i addicted to violence? Are we as a society addicted? So much media in our popular culture has shed light on these questions (The Running Man, any News station, Natural Born Killers), and shows us a reflection of our reality. I don’t believe that violence in video games or movies necessarily creates violent people. I think the need for fantastical escape is pretty normal, its a playground for stable minded people. It’s those who can’t grasp reality, and perform these heinous acts of violence that cause the government and media to point fingers at the gaming industry. When in actuality it is by the hands of the individuals themselves and their free will that cause these atrocities. Maybe if we didn’t live in such a violent reality with for some, extreme societal pressures, then some people wouldn’t behave so violently. Hotline Miami, like the films above, is a contemporary satire about media violence, and any video game that can make a cerebral statement that strongly will forever make it’s mark on video game history.